"I DID NOT SEE THAT COMING. A delicious hot romance!"

Sometimes it only takes a minute. A connection of eyes across a room, a quickened heartbeat, and everything changes.

I was a cocktail waitress with a fondness for partying and meaningless sex.

He owned half of Vegas, with the reputation to match.

I should have turned away. Instead, I stepped closer.

Then, the lies started.

None of it stopped me from falling in love. 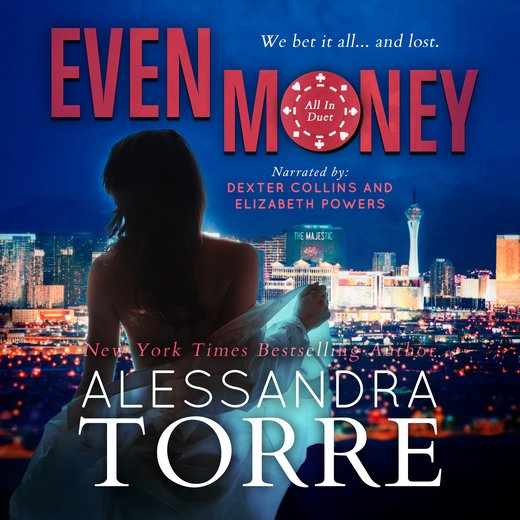 The guy in the bumblebee suit was going to walk out of here a millionaire, assuming he didn’t get his fingers cut off by Big Don. I carefully balanced six shot glasses on the glass tray, Maker’s Mark swaying as I moved toward the top table, ignoring a few blatant looks and the hand that found my ass and squeezed it.

I climbed the steps, waited for the tuxedoed protection to move aside, and approached the top table. There were four men left at the felt, all of them silent, their eyes on the flop. I stopped next to the Iranian and carefully deposited the first shot on the green surface, lining up all six in a straight line. He passed me a black chip, and I pocketed it. "Thank you, sir."

He nodded, and I drifted my gaze over the table to see if anyone else needed anything. There was a flip of cards and the upward drift of cigar smoke. None of the men moved and I stepped back, my attention returning to the game as Bumblebee pushed a tall stack of black and pink chips forward.

Big Don called the bet, and I held my breath as the fourth card unfolded. It was an ace, the second one on the table. I watched Big Don and he leaned forward and smiled. I knew his tells. He had jack shit. I saw a line of sweat drip down Bumblebee’s face and mentally urged him to bet.

He didn't. He tapped, Big Don tapped, and I turned before I saw fifth street. Nodding to the heavy, I took the steps to the main level and walked through the tables, glancing up at the gold clock above the bar. Almost one, still three hours left in my shift. I moved to the cage and slipped the black chip into the copper box with my name stamped into the top.

I stepped into the dark confines of the back room, the small place dominated by the grid of video feeds that showed every inch of the adjacent room.

“Hey, beautiful.” Lance leaned back in an office chair, his hands linked behind his neck, his eyes flitting over the screens.

“Hey.” I nodded to the screens. "I've got the yellow and black suit on the top table. A hundred says he cleans out Don and Mattis.”

“You’re not stealing from me.”

“Give me two-to-one odds, and I’m in.” Rick spun his chair toward me and spoke through a mouthful of Cheetos, a pair of huge headphones half-cocked on his head.

“Done. I got chips in the box.” I didn’t need proof of his ability to cover a hundred-dollar bet. I made pennies compared to the dollars that Rick and Lance brought in. For two Stanford drop-outs, they had done all right, operating the most successful underground house in Vegas.

We watched in silence as the hand ended, a fat stack of chips pushed toward my player, who carefully rearranged his winnings before pushing in the next blind.

“What the fuck is he wearing?” Lance asked.

“I don’t know.” I reached forward and stole a bright orange Cheeto from Rick. “He thinks he looks cool.” The striped yellow and black suit might not have been so bad if the material wasn’t so shiny, the resulting effect that of a psychedelic bumblebee.

“He’s distracting. That might be helping his game,” Rick commented.

“Lloyd shouldn’t have let him in the door. Bell, would you grab me a soda?”

“You got it.” I stepped back and pulled at the handle of the mini fridge, pushing aside beers and finding one of his Sprites. Outside of this room, the place was a palace, but in here, it felt like home. Worn furniture, the guys in sweats and t-shirts, two of the monitors on ESPN, the others on the cameras. There was almost as much gambling in this room as on the floor, and I was as guilty as them, all of us players, our industry the same as our addiction. They stayed in here and kept their money between them, but I'd heard the stories. Lance once bet a stripper she couldn't fit his cock down her throat. Rick bet ten strangers at the Bellagio that he could swim across the fountains ass naked and escape without being arrested. And those had been the bets outside the casinos. Inside, there were rumors that Lance took the Mirage for three million and used that windfall to open this place. Rick apparently came from money, and lost it all, including his watch, on a bad run of blackjack four years ago. He screwed a drunk Chinese princess for ten grand and built it up to two hundred thousand the next day.

Or, so the stories went. Outside this room, they were Vegas legends. In here, they were two guys on a few hours of sleep, who hadn't had a real meal in weeks. Lance ran his hand over his face, pulling down on his cheeks before reaching out and taking the Sprite. He didn't thank me, and I didn't expect it, but I still poked his arm when I headed back out the door.

“You know it.” I nodded at Britni and met the eye of a man on table four, watching as he tapped his fingers on the top of his beer. I moved behind the bar and grabbed a fresh one for him, along with a few waters, and stepped back on the floor.

A groan went up at the top table, and I glanced over, watching as Bumblebee stretched his hands forward, gathering more chips. I grinned.

Three hours later, I leaned against the building and checked my phone. According to the app, my ride was nine minutes away, which is what it had said for the last six minutes. I sighed.

The back door opened, and Lance stepped out, his head down, attention on his cell. He glanced to the side, saw me, and paused. “What are you still doing here?”

I pocketed my phone. “My car’s in the shop. I’m waiting on a ride.”

“And you’re out here alone? You trying to get snatched?”

“Fuck that. We pay security for a reason, B.” Lance pressed a button on his keys, and his Viper flashed in the dark. “Cancel the car. You can sit on Rick’s lap.”

“The driver’s only a few minutes away.”

I watched him turn as the door opened and Rick stepped out. I listened to Lance update him on my car, and I rolled my eyes, refreshing my screen, the vehicle’s dot moving closer.

“Lloyd’s gonna wait with you,” Rick decided. “You shouldn’t be out here alone.”

I shrugged. “Fine. Will that make you guys happy?”

“I’m happy.” Rick glanced at Lance, who spun the key ring on his finger and strolled toward the car. “You happy?”

I moved aside to make room for Lloyd, who lumbered outside with the athletic prowess of a garbage truck. “Sorry, Lloyd. The boys are paranoid.”

“You kidding?” He settled against the brick and rummaged in his pocket for his cigarettes. “Best looking part of my night.”

I smiled and watched the pair climb into the Viper, the engine revving, the top lowering, baseball caps pulled on. They were closer than brothers and felt like family to me. I'd been a waitress at a truck-stop diner when the pair of them had wandered in, two years ago. They'd been drunk and almost got killed by two bikers on the wrong end of a meth high. I'd stepped into the argument and gotten fired for it, but my intervention had kept their pretty faces intact and won their eternal loyalty in the process. The next night, they’d offered me a job, one that paid enough to get me out of my trailer and into the city limits, with enough left over to allow me to think about college.

Speaking of which... I smiled at the thought of tomorrow's statistics class and its delicious professor. If I got in bed by five-thirty, I could get in five hours of sleep and still have time to hit his office before my afternoon class.

Headlights swept over the lot, and I straightened when I saw the vehicle turn in.

Lloyd followed my gaze. “That yours?”

“Yep.” I reached out my fist and bumped it against his. “Thanks.”

“Always.” I opened the door and tossed my purse inside, ducking in and confirming my address with the driver. Closing the door, I settled into the seat and fought a yawn. The car pulled forward and the neon signs of The Strip came into view.

Vegas is shaped like a caterpillar, the Strip its body, the casinos its legs. Lance and Rick's place was on the ass end, far enough off the strip to avoid tourists, but close enough to allow the big boys to swing by without being too far from home.

In a city filled with tables, we fit the unique need of the elite—a place for the gods to play. Steve Wynn couldn’t play at his own house, and couldn’t be seen at a competitor’s table, so he came here. All of them did. It was a place where they could discreetly talk shop, play big, and loosen their ties.

Granted, not all of the clients were casino heads. Celebrities came to lay low and Vegas's hoteliers, restaurant owners, and politicians—anyone who didn't want to show favor with any particular casino, or who wanted their gambling habits kept quiet—also came to us.

“Which house is yours?” The driver glanced in the rearview mirror.

I sat forward, my hand gripping the headrest before me and trying to see the dark street. "It's the second one. Right there."

He stopped in front of the driveway and I grabbed my purse, sweeping a hand over the seat to make sure I had everything. I thanked the driver and stepped out, turning to the dark, ranch-style home.

I frowned, a prickle of unease tiptoeing up my back. I almost reached back to catch the driver’s attention and ask him to wait. But he pulled forward, his tail lights glowing as he took a right at the stop sign and was gone.

My house shouldn't be dark. I lived with three women, all who worked hard, partied harder, slept with their TVs on, and didn’t know how to turn out a light to save their life. There was a reason our electricity bill never dropped below three hundred bucks, and it was primarily because our house was never dark.

I walked up to the porch and paused on the stoop, my eye on the knob. The unease inside grew, morphed. It had me sliding my hand into my purse and wrapping my fingers around the small handgun I kept there. I forced my arms to relax until the tremor in my grip stopped.

I’d had this feeling before.