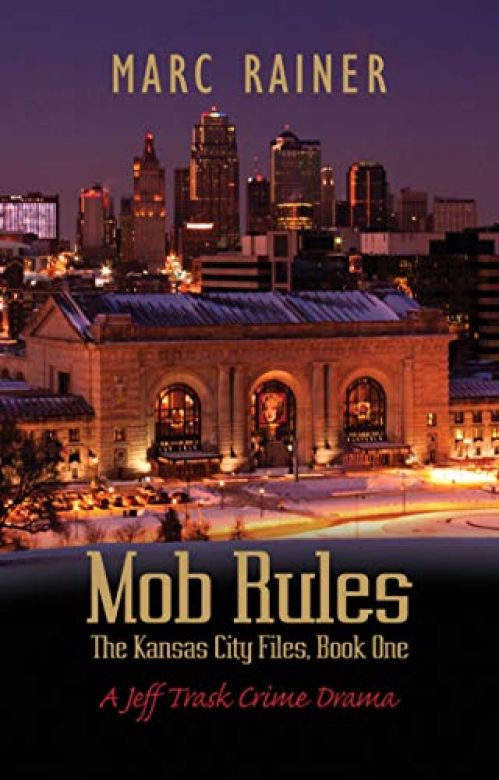 Assistant United States Attorney Jeff Trask moves from Washington, D.C., to Kansas City, where he begins an investigation into an international drug ring smuggling the deadly combination of fentanyl and heroin from the southern border to the Eastern Seaboard.

In this case, Trask is fighting a rival whose criminal genius rivals Trask's own intellect, and--while Trask is bound by the legal code and his own set of morals--the mob boss on the other side of this battle is unencumbered by such restrictions. The investigation forces Trask to choose whether to operate within the legal system or to venture outside it in order to bring down the murderous kingpin. Marc Rainer again blends actual events from his career with a compelling plot line to add to a series of novels hailed by law enforcement professionals for their realism.

This Jeff Trask thrill ride from bestselling author, Marc Rainer, will keep you on the edge of your seat!

Please log in to recommend or discuss...
Marc Rainer

“Look at the other table. Big John’s having a good run tonight.”

The taller of the three men nodded in the direction of the center of the casino floor.

“Yeah, I walked by him on the way back from the head,” the second man said. “He’s got quite a pile of chips in front of him. I’d say he’s up a good three grand, easy.”

“Don’t seem right, does it?” the first speaker asked. “We do a full eighteen months on that contempt beef, he gets out after a couple of weeks, and he’s the guy getting rich tonight.”

“Nope, not fair at all,” the third man said, shaking his head. “I’m down five hundred for the night.”

“We’ll follow him,” the tall man decided. “We can even out the night, maybe go home up a little. Hang tight ’til he heads for the exit.”

They continued to play minimum bets at their own blackjack table, watching as their target walked to the cashier’s cage. The big man shoved his chips through the window and waited while the woman on the other side of the cage counted out almost $4,000. He slid a hundred-dollar bill back across the counter to her for a tip, earning a wide grin from her in return. He turned and headed for the front door and the parking lot.

“What about our chips?” one of the others asked, pointing to his meager stack.

“Put ’em in your pocket, dummy,” the tall man said. “We’ll be coming back with a better roll.”

They got up from the table, leaving their chairs halfway out in the aisle and earning a disapproving shake of the head from the pit boss, who walked around to push the chairs back under the table’s edge. They kept their distance behind their target to mask their intentions but kept him in sight as they followed the big man into the open parking lot. When he pulled his pickup out of the lot and turned eastward onto 210, they were three vehicles behind him.

He turned south onto I-435, and a few exits later turned into one of the older Kansas City neighborhoods just north of I-70. He was getting out of the truck in his driveway when the car pulled in behind him. He frowned, recognizing the vehicle.

“Looks like you had a good night, Big John,” the tall man said as he got out of the driver’s seat. His companions followed him up the driveway as they approached their target.

“I did okay,” John said, backing nervously toward the house. “What do you guys want, Dom?”

The big man hesitated for only a second. He read the eyes burning holes into him from four feet away, and he was very familiar with the character behind them. He decided to take the chance that he would live if he surrendered his winnings. He pulled the roll of bills from his right front pants pocket and tossed it to the man with the gun.

“Yeah, there’s something else,” Dom said, flicking the barrel of the pistol upward as he spoke. “Did you talk to the grand jury, John?”

“Hell, no! You know better than that, Dom. They just didn’t have enough to hold me. I wasn’t in the game, so I had nuthin’ to tell ’em. They finally figured that out and cut me loose.”

“Pretty convenient, if you ask me,” Dom said, shaking his head. “How come it took ’em two whole weeks to figure that out? Why’d they pick you up at all? They must have figured you had somethin’ to say; at least that’s how it looks to me.”

“That ain’t how it was at all, Dom. I took the oath. I know what it means, and you know that. Hell, I ran with your Dad for years—”

The two gunshots shattered both the stillness of the night and the big man’s skull.

“You shouldn’t have mentioned my dad, you rat.” Dom spit on the body quivering in front of him. “See if he gave us all of it,” he commanded.

His partners did as they’d been instructed, and started rummaging through the dead man’s pockets, pausing when they saw the porch light come on.

A woman stepped through the front door, freezing when she saw the body lying in the driveway.

“John!?” She saw the blood pooling under his head, the color of the stain now visible in the light. “Oh my God! What have you done?” She screamed as she ran to the body, throwing one of the other men aside as she fell onto her husband’s corpse.

“You should have stayed inside, Margie,” Dom said. He fired two more shots, and the woman collapsed on top of her husband’s body.

“Let’s go,” Dom commanded. He hopped into the driver’s seat and turned the car back toward I-70.

The young man nodded toward his monitor screen, his right hand working a controller.  Above the floor of the casino, the camera—housed in one of the hundreds of dark gray plastic domes to conceal the cameras from human eyes below—turned and zoomed in toward the three men walking through the casino floor.

“What’ve you got, Benny?” Sergeant Jerry Dalton of the Missouri Highway Patrol got up from his own monitor station and walked over behind the young man, who pointed to the center screen in a bank of monitors.

“Dom and his boys. They left broke an hour ago. They’re not broke anymore.”

“Use the FRS and print it,” Dalton instructed.

The casino’s security office used facial recognition software—“FRS” to those familiar with it—to confirm the identities of persons on the floor deemed to be undesirable.  Dalton knew the face on sight—most of the experienced law enforcement personnel in the area did—but proof for court purposes required neutral, recorded evidence. He looked over Benny’s shoulder as the technician zoomed in even closer on the face at the cashier’s cage, pushed a button, and nodded as the system identified the man as Dominic Silvestri, Jr.

“His dad’s already blacklisted,” Dalton thought out loud. “I’ll check and see if anything’s on the radio. If that’s dirty money he’s using, maybe we can keep Little Dom out of the house, too. The fewer mob punks we have on site, the better.”

Dalton left the security center and walked to the casino’s covered garage where his unmarked cruiser was parked just steps from the door. A sign reading, “Reserved, Missouri Gaming Commission,” was bolted to the concrete at the front of his parking space. Once inside the car, instead of checking the Highway Patrol frequencies on this radio, he pushed a contact icon on his cell phone.

“Hey! What’s up, Sarge?” a cheerful voice answered his call.

“Funny you should ask.” Sgt. Thomas Land of the Kansas City, Missouri, Police Department paused a second before continuing. He had been in the same police academy class as Dalton, before Jerry had been hired away by the Patrol. They had both recently made their respective sergeants lists, and still used their promotion greetings. “Let me get back to the notes I took. They’re on my table out front. I scribbled ’em down when I heard the call before I hit the sack.”

“Sorry to bother you at this hour,” Dalton said. “Little Dom and his boys blew a wad here at the tables earlier tonight. They left, and then they showed back up all flush with cash. It just didn’t smell right. I thought they might have knocked over a store or something to pick up another roll.”

“I haven’t heard any calls like that tonight, bud. Here’s the one note I did take down from my radio scan. Big John Porcello and his wife were found shot to death in their driveway. Guess our local Mafia’s missing a soldier.”

Dalton didn’t answer for a moment.

“You still there, Jerry?” Land asked.

“Yeah, sorry. When did that call come in?”

“About an hour ago, just before I went to bed.”

“Like I said, sorry to get you out of the sack. When you get an approximate time of death, can you call me? I may have something for your homicide guys.”

“Will do. You still liking the Gaming Commission gig?”

“Beats working for a living. I watch TV all night. Lots of TVs, actually.”

“That’s what you get for being promoted.”

“Yeah. At least you still do police work. How’s the squad?”

“Busy as hell,” Land answered. “Of course, they blame me for that.”

Dalton chuckled. “You gotta learn to say ‘no’ once in a while, Tommy.”

“It’s hard to do that when it’s the bosses calling, and I got lots of bosses.”

Dalton killed the call and went back into the casino and the security room.

“Benny,” he said, looking over the young man’s shoulder again, “Bring up the feed where Dom and his boys left—you know—before they came back.”

Benny did as he had been instructed. The screen showed the three men leaving the main entrance of the casino.

The slow-motion rolled in reverse for a few seconds.

“There! Freeze that and copy the files for me,” Dalton said.

Benny nodded and pushed some buttons on his console. The monitor was momentarily frozen on the entrance at the instant that John Porcello had walked off the gaming floor.

“They followed him,” Dalton muttered, thinking out loud again.