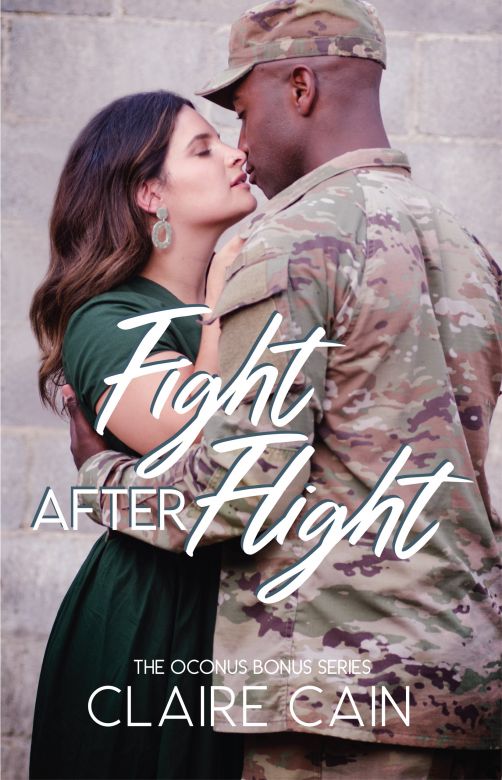 No one has ever hurt me like Bec Jones. Everything changed when we lost her brother, my best friend, and she ran from me with only an angry goodbye.

Three years later, after stumbling into her after years of no contact, I can’t think straight. I can’t stop all those feelings from rushing back, trying to strangle me.

I want to be with her, especially since fate has brought us back together. But I know what happens when she runs, and I can’t be sure she won’t do it again.

Fight After Flight is book three in the OCONUS Bonus series, but can be read as a standalone. It’s a dual point of view romance told in first person that will give you all the sizzle and heat but keep it sweet.

Muffled voices hummed outside my office door. Each echo set the cadence to which my heart pounded, shooting adrenaline through me in rough, angry jolts that caused my hands to shake.

The handle on the door lowered. My breath evaporated—if that was a thing breath could do. Like it got robbed from my lungs. I couldn’t catch it—it ran away like a coward. Not unlike me.

And there he was.

I blinked, the sound of his voice harsh and beautiful. Familiar and yet new. I stood.

His face—one I’d known to be typically smiling and kind and warm and wonderful, right up until the last few weeks before I’d left—looked older. His eyes, like his skin, were still deep brown, his gaze probing. The cut of his cheeks and jaw were masculine and appealing, his lips sculpted and, I knew, ever so soft. He still shaved his head like he had before, the dark curve of his skull serving to highlight his beautiful face all the more.

But today, notably, no welcoming crinkle feathered at the sides of his eyes, nor did those lips curve up into a smile. I couldn’t see his perfect white teeth. I couldn’t see much of the man I’d known.

His dark brows dipped low. “What are you doing here?”

He shook his head slightly, like he hadn’t meant to say what he had. “I mean, what are you doing working here at Kugelfels? I thought you were in Belgium or something.”

He’d thought of me? Had ideas about where I should be? Somehow, this only made me feel more wretched, especially after the way I had treated him. “I considered it. But then this position opened, and I wanted to come here because Emily Wender, the director, was my old boss at Fort Campbell.”

The words Fort Campbell fell hard into the room. The air seemed to flatten out under their weight, and my breath, which had returned out of thin air, came out in a pant. My hands shook and I folded my arms across my chest, tucking them in tight for protection.

I wanted to close my eyes against his words. Why was this hitting me so hard? Oh, God, it was.

What else could I say? I’ve dreamed about this? Or, I’ve dreaded and longed for this in equal measure? Or better yet, I missed you so much it hurt?

The tightness in his posture relaxed a bit, his shoulders and neck less rigid now. “This is crazy. After all this time…”

His gaze roamed over my face, and some of that light, sweet quality he’d always had entered his expression. My stomach flipped, his eyes on me no less affecting than they’d ever been.

He smiled. Just a closed-mouth smile, but it slapped at me, reminding me of too many things.

“Well, listen, I know it’s closing time. I just—I saw you and had to say hi. Let’s grab coffee and catch up sometime.”

Meet with him. Again? That required superhuman strength I did not possess. I crushed my teeth together, my jaw aching with the contact. When I spoke, it was breath and air more than sound, the effort to speak one I hadn’t realized would be such a challenge. “I, uh…”

He tilted his head, his smile patient. “Why don’t we exchange numbers and we can arrange it that way. I’m sure you’ve got to—”

The sound of my voice cut through the room, and my eyes widened at how cold it sounded. I needed him to leave, and I didn’t want his number. I didn’t want coffee with him. And how could he possibly want it with me?

His expressive face didn’t hide his response. His brows rose, and surprise, a flash of hurt, then frustration settled there.

His mouth opened, then shut, and his lips flattened into a grim line. “Okay then.”

He left, and the door swung shut. I collapsed into my chair, spent from what had been mere minutes. But these had been minutes with Thatcher Wild, which gave the time a whole other—draining, intense—dimension I was not ready for.