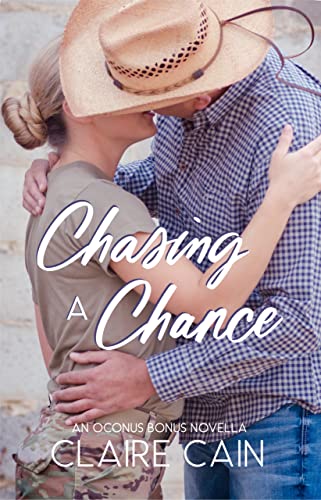 She doesn’t need a man. He doesn’t want a woman. They’re both wrong.

Alicia Cartwell has a matter of months left on her active duty Army contract before she enters the civilian world and pursues her plans to become a competitive FitCross athlete. She’s laser focused and nothing can throw her off her game—except maybe herself.

Beau Richmond has no interest in relationships, especially not during his one year abroad at Kugelfels Army base in Germany as a civilian contractor. But when he meets Alicia, all bets are off.

Through repeated encounters on the small Army post and a chance meeting on a trip to the Alps, Beau and Alicia discover their best laid plans to avoid romance are no match for their blossoming friendship and chemistry. But will they risk compromising their futures to chase the chance that they’re meant to be?

Chasing a Chance is a dual POV first-person romance set in the OCONUS Bonus Series. It's a novella-length story and fits neatly between books four and five but can be read at any point in the series.

***
Check out the completed series:

The Problem with Planning - Eric and Livie
Happiness in a Hoax - Noah and Katie
Fight After Flight - Thatcher and Bec
The Bright Side of Brooding - Nick and Summer
Holding On to Hope - Nate and Ariel
Waiting On Love at Christmas (novella) - Nina and David
Chasing a Chance (novella) - Alicia and Beau (available free through Claire’s website!)