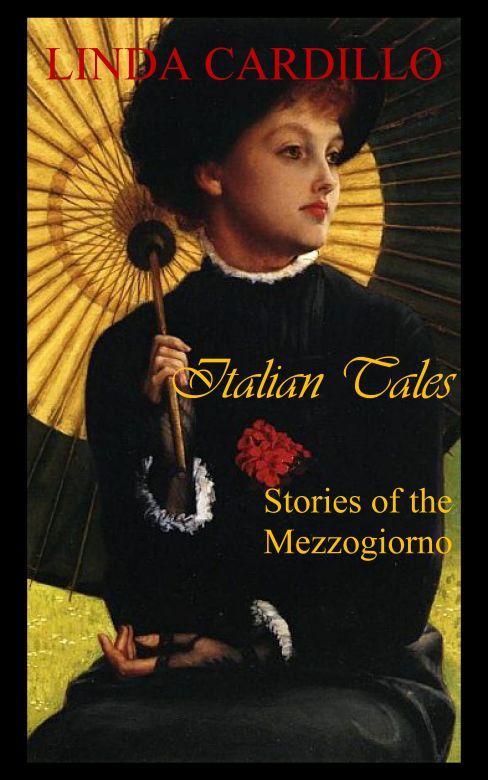 My grandmother Giuseppina’s gift to my daughter Caterina was a pair of diamond earrings. Exquisite, tiny drops. My tears of joy, I think. My stars. My beacons.

I pierced her ears with a heated needle while Flora held her. She watched me with her brown eyes, sucked on Flora’s finger. She cried, but only a little. Once the earrings were in, I nursed her and she quieted.

She spent it then sleeping in a baby carriage in the courtyard behind my husband’s saloon, the Palace of Dreams, while I cooked for our customers. The music of her father at the piano, the lazy chatter of Bifaro’s whores on the hotel balcony behind the Palace, the crackle of sausages and bracciola frying, the footsteps of Bifaro’s customers shuffling furtively up the stairs. That is what she heard.

When Rosa Santomeno’s house in Tuckahoe burned down, I said nothing. I kept my nose out of it, going about my own business while the gossips sifted through every rumor as if they were Rosa herself sifting through the ashes for whatever fragments of her household she could find.

“Such bad luck,” they sympathized with her, as she enumerated the losses of her father’s pocket watch, her mother’s intarsia armoire, her own jewelry.  “At least you all got out alive.”

But behind her back, they criticized her slovenly habits, suspecting that it was Rosa’s own carelessness that had brought about the catastrophe. And if not her carelessness, then her treachery and dishonesty finally catching up with her, paying her back through the vengeful act of someone she had harmed in the past. More and more people began to believe that someone had indeed set the fire, especially when Rosa herself began muttering that she believed someone was out to get her. But she kept her mouth shut about who she thought it was, or why. And she didn’t show her face around my neighborhood.

She had reason not to.

The day I discovered Caterina’s earrings missing—the diamonds stolen from her tiny earlobes—was the day after her christening. We had closed the Palace that Sunday. Paolo and I, exhilarated by the joy of Caterina’s birth and finally released from the agony of uncertainty that had haunted the final months of my pregnancy, were ready to celebrate. It was also an opportunity to welcome Papa and the boys to America and to show off to Papa the gleam and polish of the Palace’s success. I cooked for days ahead. I had prepared manicotti, a cacciatore with rabbit, and sausage and peppers. I made eggplant parmigiana and arrosto di maiale. Tilly had helped me bake a sweet ricotta pie with orange peel, a torta di nocciole, and two trays of anise cookies. The morning of the christening, I heaped an antipasto platter with prosciutto, mortadella, salami, and soprasatta, roasted peppers, anchovies, olives, my pickled eggplant, provolone, and mozzarella.

We invited everyone we knew—family, friends, neighbors, even business associates. Philly Santomeno, Rosa’s husband, was the brother of Madama Bifaro and a business associate of Claudio’s every now and then. Rosa showed up on her husband’s arm with a little nothing for the baby, a cheap medal on a pink ribbon. Ever since Philly built the house up in Tuckahoe we hadn’t seen much of Rosa. She was trying to be a respectable lady, closing her eyes to where most of Philly’s money came from. I had never had much use for Rosa. I had learned early on that she lied when it suited her, that she envied other people’s good fortune, and that whatever she had in her own life did not satisfy her. She had no children of her own, but had enough to say about other people’s—how wild they were, or unkempt, or ugly.

Caterina had been passed around the room, from aunt to uncle to grandfather. People admired her dark ringlets and the satin christening gown that all her cousins had worn before her, a gown that my mother had sent when the first grandchild in the family—Claudio’s son Adamo—had been born eight years ago. People also commented on the little earrings—how striking they were, how brilliantly they caught the afternoon light. Zi’Yolanda was holding Caterina when Rosa came up. Rosa stroked the cream-colored skirt of Caterina’s dress and reached out with a broken fingernail to the diamond in Caterina’s left ear.

“How ridiculous, to waste stones like these on an infant. What is Giulia trying to prove, that nobody else has ever had a baby before? She should watch out how much attention she is calling on her daughter.”

With these pronouncements she glided away.

I didn’t think any more of her comments than to dismiss them as the sour complaints of a jealous spirit.

The last of the guests drifted out of the Palace by seven in the evening. Caterina was weary and cranky, so I nursed her and settled her into her carriage while Paolo and I swept up and put the Palace back in order.

The next day the sun shone strong and bright, and even though it was November I was able to put Caterina out in the courtyard bundled up for her nap. It was too cold for Bifaro’s girls to be out on the balcony, but every now and then one of them stepped outside for a cigarette or a few minutes respite from the boredom and the squalor. Once, when the door opened, I heard an argument going on inside. I was surprised to hear Rosa’s voice. She usually doesn’t want to have much to do with her sister-in-law Bifaro, especially not at the hotel. But she was ranting about some injustice that Bifaro had committed. I heard what sounded like a slap, followed by more angry words, the clink of something metallic hitting stone, a slammed door, a shrill scream, and then rushed footsteps descending the stairs. I had my back to the courtyard, with my hands grabbing the handles of a pot heavy with cannellini beans that I had left to soak and was now bringing inside to simmer. Inside the kitchen I was greeted by a deliveryman with a bill for me to sign.

When I returned to the courtyard, Caterina was fussing and working herself up to a full-scale wail. Out of the corner of my eye I caught a glimpse of the back of a respectably dressed woman entering the ground floor door of the hotel. It was Rosa’s back.

I picked up Caterina to comfort her and brought her inside. She didn’t leave my sight for the rest of the day. It wasn’t until that evening, when I was giving her a bath, that I noticed that the earrings were gone.

The next day I took the trolley with Caterina to Tuckahoe and walked the two miles beyond the trolley stop to Rosa’s house. I saw the curtains move at the side window when I rang the doorbell. Nobody answered at first, but I wouldn’t go away. I knew she was in the house, so I continued to ring and knock until she finally opened the door.

I demanded the earrings. She denied that she had them. “You have no proof,” she threw back at me. “You can’t even prove that I was there. You never even saw the face of the woman you said was in the courtyard. And I wouldn’t want those gaudy things anyway. Why would I take your baby’s diamonds when Philly buys me my own? Go back to your kitchen, Giulia. Find somebody else to blame your misfortune on.”

I wanted to tear apart her house looking for the earrings. But I got up and left with my dignity.

When I got outside, though, I realized that I wasn’t ready to leave. Something held me there in the yard. I started to walk slowly around the house. I bent down and picked up a handful of dirt and rubbed it between my fingers and my thumb. Then, I knew what I had to do to quiet my outrage. I let the dirt leave my fingers as I circled the house. I keened words that came from somewhere else, from someone else. I blew the last of the dust from my fingertips as I rounded the final corner of the house and then I walked away, never looking back. If Rosa was watching me I will never know. If she heard my curse, or felt it, she never admitted it to anyone.

Seventeen days later, the house burned down. Eight days after that, the fire marshal discovered the faulty wiring that had started the blaze. The next day, a package arrived at the Palace addressed to Caterina with no return address. Inside, were her earrings.