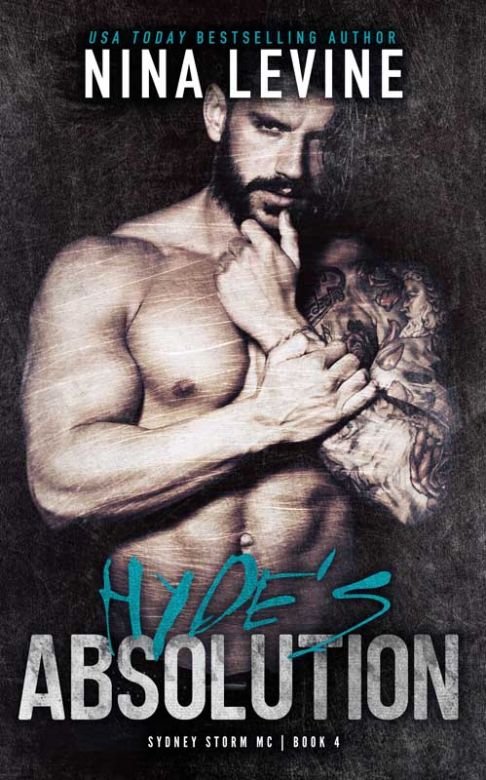 "The suspense is intense and the passion even more so. I couldn't read fast enough, or slow enough. I know, I'm greedy."

Monroe Lee is a handful.
She fights me, challenges me and tries to resist me.

I am not a good man.
I’ve hurt everyone I’ve ever loved.
I should walk away before I ruin her too.

But fuck, we are fire together.
And I’ve been out in the cold too long.

At a time when everything is falling down around me, she might just be my saviour.

This story contains all the panty-melting sexiness and alpha goodness that Nina Levine books are known for.

I watched from where my bike was parked on the other side of the street as the redhead stumbled down the path to her front door. She was clearly drunk, which meant she was of no use to me tonight.

I’d arrived back in Sydney an hour earlier, and King had given me instructions to come here and get as much information out of her as possible about the guy she worked with and who he bought his drugs from. She’d just arrived home in a cab, thank fuck. I’d started to think she was out for the entire night. King was on the warpath trying to figure out who was behind Jacko’s death, and for some reason, he thought she would have information that’d help us.

Monroe—the redhead—tripped just as she almost made it to her front door. It wasn’t a surprise. The heels she wore were so fucking high I wasn’t sure how she even managed to stand in them, let alone walk in them.

“Fuck,” I muttered when she landed on her ass. Moving off my bike, I crossed the street and jogged to where she sat.

“Why the fuck do women insist on wearing heels like that?”

Her back was to me when I asked my question. She swiftly turned her upper body to look at me. “Jesus, do you always sneak up on women near midnight?” I didn’t miss the panic in her eyes before she realised it was me. Couldn’t blame her—it was fucking late. I’d tried to talk King into putting this visit off until the morning, but he’d been forceful in his desire to see it done tonight. I guessed the fact she’d met me once helped ease some of her concern.

“Can’t say it’s on my regular list of jobs, no.” I watched as her eyes traced every inch of my body. Monroe appeared to be a woman who wasn’t afraid to show her healthy appreciation for men. I crouched next to her. “See anything you like?”

My question didn’t even come close to interrupting her appraisal. She continued to silently check me out before slowly bringing her eyes back up to meet mine. A smile danced across her lips. “How tall are you?”

My lips twitched with amusement. She was fucking drunk. And that was the strangest fucking question I’d ever been asked by a woman. “Six foot five.”

The lazy smile on her face grew into the kind of smile that could knock a man on his ass. “Well look at that,” she murmured, making absolutely no sense to me.

“A man who is taller than me. I vaguely remember that about you, but I wasn’t sure if my memory was right.”

She moved in an effort to stand, but her drunken state didn’t allow that to go too smoothly. She’d almost made it off her knees when she started to go down again. I reached for her and helped her up. By the time we were both standing, my hands were firmly around her waist and her tits were pressed up against my chest.

Her face lit up and she hit me with that dazzling smile again. “I’d say it’s a good thing you dropped by unannounced so late. Otherwise I would have probably had to sleep out here tonight.”

I jerked my chin at the door. “How about you unlock that door so I can get you inside before you pass out.”

“Oh good lord, not only are you tall, but you’re helpful, too. It’s not often a girl can tick two items off her list in such a short space of time.”

I let her go so she could turn and take the last few steps to the door, but made sure to keep my hands close in case she fell again. “What list are we ticking items off?” I’d expected to cop an earful for waking her when I arrived at her place, not this.

She stopped abruptly and turned back to face me. I hadn’t been expecting that, so I collided with her. She wobbled on unsteady legs, but my arms were around her in an instant, holding her up.

Her hands landed on my chest and she pressed herself closer against me.

This was getting dangerous. Monroe was dangerous. Those curves called to me. Fuck, everything about this woman called to me. I remembered the first time I’d laid eyes on her. She’d been in her kitchen rambling on about broken doors and religious shit or something. I’d copped one look at those curves and I’d been fucking lost for words for a minute. It wasn’t just her body that did it for me; it was everything about her. From that red hair, to her voice, to the way she’d handled herself when Devil and I had come over—she had something I couldn’t put my finger on or describe. But whatever it was, I wanted a taste.

“You had much experience with women, tiger?”

Fuck, though, I’d answer to that.

“Depends on your definition of much.”

“Mmm, I’m betting that by your definition, you probably have. I can’t imagine a man like you not getting your fill. But I’m asking about your experience with dating and relationships, not purely sex.”

I raised a brow. “Is this the alcohol talking or do you talk to all men this way?”

She ignored that question. “So, do you have much experience?”

I gripped her waist and moved her away from me. “Can’t say I do.”

“I figured. It’s a damn shame you’re not into dating. But I’m taking a break anyway, apparently. If you listen to my mother and Tatum. They think shoes can make up for cock. Pfft. That’s what women with cock in their life say. Us singles girls would give up shoes in a heartbeat.”

I stared at her, no clue what she was going on about. But then, that seemed to be how most of this conversation was going down. “Okay, let’s get you inside.”

She placed a hand on her hip. “You trying to tell me to stop talking?”

I chuckled. “I doubt any man could tell you that and get away with it.”

My answer seemed to work for her. She finally turned, unlocked the door and entered her house. I followed close behind, steadying her when she stumbled. We walked the short distance to her kitchen where she threw her bag on the counter, kicked off her shoes, and poured herself a drink of water.

Eyeing me, she said, “What are you doing here? We never did cover that.”

It had surprised me that she’d allowed me into her home so easily, but I figured her drunken state had a lot to do with that decision.

“King sent me to ask you about the guy you work with and who he gets his drugs from.”

“You think I know that kind of information? I don’t do drugs, so I’m not up on who the drug dealers are in this town.”

It was what I’d suspected and had said as much to King. “Yeah, I figured. I’ll need to talk with your guy tomorrow. You know where I’ll be able to find him?”

“He’s working.” She reached for one of the pens she had stashed in a mug on the counter, and a piece of paper. Scribbling an address down, she said, “He’ll be here from about nine until three.”

I took the paper when she offered it to me. “You good from here?”

She smiled and cocked her head. “You offering to help me some more?”

I was far from a fucking saint, but taking advantage of drunk women wasn’t something I did. Even when that was all I wanted to do. “I think it’d be best if I didn’t help you too much tonight.”

She continued to watch me with appreciation. “You sure do know how to make a woman feel good. I’ll let you off the hook since you appear hell-bent on not touching me. But let the record show that I may not let you walk away a second time if, say, you were to show up here again.”

Jesus, it had been a long fucking time since I’d wanted to flirt with a woman rather than simply fucking her. I pushed off from the counter I was leaning against. “Is that an invitation?”

She shrugged drunkenly. Her body moved with an easy and natural sexiness that sucked me right in. Even when she was intoxicated and not trying to be sexy, she fucking was. “I’ll leave that up to you.”

Not a smart move. If shit were up to me, I’d be back to fuck her tomorrow. But with all her talk of dating, I figured Monroe was probably looking for a relationship rather than what I had to offer. And again, for the first time in a long time, I wasn’t sure I wanted to chance disappointing a woman.