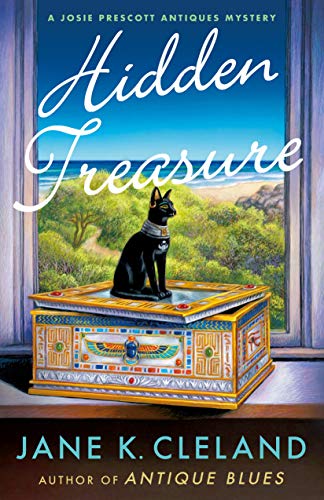 The discovery of a mysterious antique trunk leads to a disappearance―and murder―in the latest in this beloved cozy series set on the rugged New Hampshire coast, Jane K. Cleland's Hidden Treasure. When antiques expert Josie Prescott finds a mysterious trunk, no one thinks it could lead to murder. Josie, the owner of Prescott’s Antiques & Auctions, and her new husband, Ty, have finally found their dream home, a Victorian beauty on the beach known in the town of Rocky Point as the “Gingerbread House.” It was recently vacated by Maudie Wilson, an aging widow, whose concerned nieces have moved her into a nearby assisted living facility. Josie befriends Maudie, who seems surprisingly sharp, considering her family’s doubts about her soundness of mind. As Josie and Ty joyfully begin renovations on the Gingerbread House, the nieces report that Maudie, in her forgetfulness, may have left behind an old trunk, which she’s desperate to get back. Sure enough, Josie finds the trunk inside a hidden compartment, and within it a jewel-encrusted box holding a sculpture of a cat. Josie can understand the sense of urgency about getting the objects back―they look valuable, and not just in the sentimental sense. But when Josie goes to return the box to Maudie, the woman has vanished. And on the floor of her empty apartment lies a corpse, a woman bludgeoned to death. Sick with worry for Maudie’s safety, Josie begins to piece together the clues to the murder. Everyone around her seems to want to pitch in, from Maudie’s family, to the receptionist at the facility, to the young couple helping Josie with her renovations, but with the killer so close to home, Josie has to be on her guard.


I was feeling fine, better than fine. I was riding high. My TV show, Josie’s Antiques, had been renewed for a fifth season, and Ty and I had just closed on the house of my dreams. What a way to start a Monday.

I was back in my office after seeing Ty off for a can’t-change-the-date, hush-hush training exercise in Vermont, part of his job for Homeland Security. I was itchy to be up and doing. I couldn’t stop smiling.

My phone buzzed. It was Cara, Prescott’s newly promoted office manager. “A Celia Akins is here, Josie. She insists on seeing you right away.” Cara lowered her voice. “She’s the niece of the person you and Ty bought the house from. She says there’s a problem.”

We’d only owned the house for an hour—how could there be a problem? “What kind of problem?”

I could hear the tension in Cara’s voice.

When I heard footsteps on the spiral staircase that led to my private office on the mezzanine level, I dislodged Hank, Prescott’s Maine Coon cat, from my lap so I could stand. He made a frustrated, guttural whine. Hank had attitude. I reached down to pat his furry little head, and he sauntered away.

Celia Akins was short and stocky with curly dirt-brown hair, a double chin, and thin lips. At a guess, she was around forty.

I thanked Cara and said hello to Celia as I walked toward the seating area. I stood in front of a yellow brocade Queen Anne wing chair.

Celia murmured hello as she sank onto the matching love seat. Her ruddy cheeks were flushed, and she seemed to have trouble meeting my eyes.

“Thank you for seeing me without an appointment.”

“I feel terrible talking about family matters to a stranger, but we need your help. My sister, Stacy, and I. For our Aunt Maudie.” She lowered her eyes to her hands gripped tightly together in her lap, then raised them to look me dead in the eye. “You bought my Aunt Maudie’s house.”

“Stacy and I are Aunt Maudie’s only living relatives. We’re protective of her. We love her.”

She seemed to expect a response. “She’s a lucky woman.”

She licked her lips, then lowered her eyes again. Her discomfort was making me uncomfortable.

She raised her eyes. “I made a mistake. This is all my fault.”

“I didn’t check everything before the movers came. Stacy lives in New York, so naturally it was my responsibility because I’m local. I didn’t do a good enough job, and now Aunt Maudie is missing a trunk.”

“She doesn’t remember when she saw it last.” Celia paused again, pressing her lips together. She was in the throes of some strong emotion, but I couldn’t tell what. “It’s perfectly understandable that she’s confused and forgetful. She lived in that house for forty-five years, ever since she married Uncle Eli, and Uncle Eli was born there. The house had been in the Wilson family for more than a hundred and fifty years. After all those years, and alone…”

“Moving can be a nightmare.”

“Exactly, and it’s extra awful for someone forced to sort through generations of accumulation not their own. Aunt Maudie can’t remember seeing the movers load it. The movers say they took everything they were supposed to and delivered it all as instructed, some furniture to me and all the rest to Aunt Maudie. Stacy thinks it got thrown out by mistake when Aunt Maudie brought in the junk removal company, but there’s no way to tell. They track loads by weight, not items. Our only hope is that it was somehow missed during the move.”

“I wish I could help, but I don’t think I can. I did a walk-through this morning before the closing. The house is empty.”

“I know losing a trunk isn’t like losing a deck of cards, but it’s possible. The attic is big and dark. So is the cellar. Maybe it’s behind the boiler, and just got missed. I was hoping you’d let me take a look.”

I felt a twinge of hesitation, an innate territorial objection, but only a twinge. I knew how wrenching it was to lose cherished objects.

I swallowed my qualms. “Of course.”

I agreed, and she called her husband, Doug, and asked him to meet us there.

Fifteen minutes later, I rolled to a stop on the sandy shoulder behind Celia’s silver Toyota RAV4. Doug, she said, should arrive in a minute or two.

I led the way through the black metal gate and along the flagstone walkway to the porch, then leaned against one of the round columns and settled in to wait for Doug. Tall tiger lilies and white heirloom bearded irises lined the walkway. I could hear the waves breaking as they rolled to shore, but I couldn’t see them. They landed with a soothing, hypnotic rhythm, not a crash or a roar, more like a rumble. The briny scent of the ocean glided in on a soft breeze. The sky was bright blue and cloudless. It was a picture-perfect day, a day for new beginnings, one of God’s days, my mother would have said.

“Thank you for this,” Celia said. “I know it’s an inconvenience.”

Given her somber mood, I didn’t want to tell her that despite my slight hesitation, I was thrilled to have an excuse to walk through my new house, my home, again.