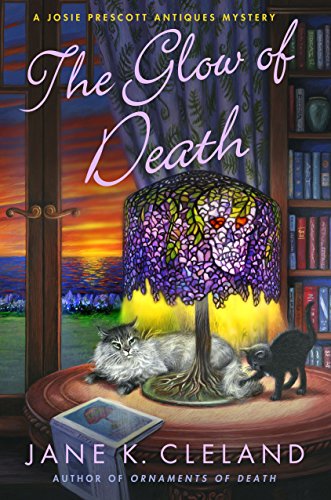 As a warm ocean breeze ruffles the tall grass along Rocky Point’s sandy dunes, Josie Prescott visits the house of a wealthy local couple, Edwin and Ava Belcher. She’s been called in to appraise their Tiffany lamp, which everyone is delighted to find is genuine. Josie’s good friend, Police Chief Ellis Hunter, is helping prepare for her annual Fourth of July barbeque when he gets a call that Ava has been murdered. Unable to reach Edwin, Ellis asks Josie to identify the body. Josie is stunned to discover that the dead woman lying on the Belcher kitchen floor is not the woman she knew as Ava. Astonishment turns to shock when Josie discovers that everything she thought she knew about the Tiffany lamp and the Belchers has been built on lies. Readers will delight in spending time in Rocky Point as these much-loved characters come together to solve a dastardly crime in the Glow of Death, a masterful addition to Jane Cleland's Josie Prescott series. In this cunning and twisty tale of envy, greed, and revenge, Josie uses her knowledge of antiques to learn the truth about the priceless Tiffany lamp—and to discover Ava’s killer.

Hank, my Maine coon cat, pranced over to say hello. I wedged the phone receiver between my ear and shoulder so I could pat my lap. He jumped up.

“It’s a mystery,” Edwin Towson said on the other end of the line, his voice confident and urbane. “Grandma Ruby swore her mother never mentioned owning a Tiffany lamp.”

“I don’t know whether we’ll be able to figure out how it ended up in your great-grandmother’s attic, but for sure we can determine if it’s genuine.”

“That’s all I’m asking. I’m leaving for Europe in the morning, but Ava will be around. She’s home today if you have time to get started right away.”

“I haven’t thought about it. The urgency has to do with insurance. If it’s an actual Tiffany, I need to get it covered.”

I thanked him for the opportunity, grabbed my tote bag, and rushed downstairs. A Tiffany lamp!

Hank trotted beside me as I jogged across the warehouse toward the front office. I pushed open the heavy door. Hank came along.

Fred, one of Prescott’s antiques appraisers, was on the phone, discussing Chippendale-style furniture with a curator in Virginia. Sasha, our chief appraiser, was out on a call—Victor and Sue O’Hara were downsizing, and I’d just signed off on her recommended bid for the lot. The O’Haras planned on making a decision within a week or two, probably in early July.

I sat at our guest table and invited Hank onto my lap for a pet-pet. While I waited for Fred to finish his call, I gave Hank a cheek rub. Jowlies, I called it.

Fred replaced the receiver in its cradle, pushed up his super-cool, black square-framed glasses, and said, “You win some. You lose some. Looks like all we have is a good repro of a Chippendale chair.”

“Emphasis on the repro,” I said.

All in a day’s work, I thought. “I bet I can cheer you up. I just got off the phone with a man named Edwin Towson,” I said, glancing at Cara, our grandmotherly receptionist. “Husband of Ava, who is a friend of Cara’s.”

“What does Edwin do?” I asked her.

“He runs an investment company. I don’t know much about it.”

“He wants us to appraise his Tiffany lamp.”

Fred’s eyes communicated his skepticism. “Everyone thinks their pretty stained glass lamp is a Tiffany.”

“One of the best.” He leaned back, lacing his hands behind his head, and grinned. “In fact, you ought to let me take charge of the appraisal. I know how busy you are.”

I chuckled. Fred was an antiques snob, disdainful of mere collectibles. A Tiffany lamp was right up his alley. I wasn’t going to turn over the job, though. As part of Prescott’s Antiques & Auctions protocol, we video-record all objects before we begin the authentication process. I like to do as many of the recordings myself as I can. It’s a good way for me to stay on top of the business.

“That’s awfully thoughtful of you, Fred,” I said, ever the diplomat. “I’ll get us started, and we’ll see after that.”

Gretchen, Prescott’s office manager, sat at her desk, smoothing out the red, white, and blue star-decked bunting we hung every year on every window a week before July Fourth. I asked her to fax over our standard contract and rattled off the number Edwin had given me.

While we waited for him to sign and return the contract, Fred asked, “What’s known about the lamp?”

“Nothing before it was found wrapped in an old army blanket, packed in a trunk in Edwin’s great-grandparents’ attic. That was in 1983 when his folks cleaned out the family house after his great-grandmother died. No one had ever heard of it or seen it before, and everyone who might know about it was dead. When they found it they assumed it was a knock-off. Everyone did, including Edwin and Ava.”

“What happened to change their minds?” Fred asked.

“My TV show. They watched the episode of Josie’s Antiques where I talk about how the colors in a Tiffany lampshade change when the light is on, how it glows. Their lamp does that, so they figured it was worth the appraisal fee to find out what they have.”

“Completely credible,” Fred said, intrigued. “How about receipts or letters or insurance policies from before they found the lamp. Do they still exist?”

“No. Edwin went through everything himself after his dad died—boxes of papers from his grandparents and great-grandparents. There was nothing that referred to the lamp.”

“Is that a problem?” Gretchen asked, listening in, her emerald eyes focused on Fred’s face.

“It’s helpful to have proof of provenance,” Fred explained, “which as you know is a documentary record of ownership, from manufacture or creation to today—but we rarely do.”

“How come? If I bought a Tiffany lamp, I’d sure as shooting keep the receipt.”

“Maybe it was a wedding gift,” I suggested.

Gretchen laughed. “And they didn’t like it, so they stashed it in the attic.”

The fax machine whirred to life.

“That was fast,” Gretchen said, taking the sheets from the paper tray. She checked that Edwin had signed and dated the agreement, smiled, and said, “You’re good to go.”

I had Eric, Prescott’s operations manager and jack-of-all-trades, load my trunk with packing material. Tiffany lamps were fragile, so delicate, in fact, that only a small percentage had survived the hundred-plus years since their creation. Those that did were culturally and artistically significant, scarce, and popular, a hat trick of value.

Fred was correct—people always thought their pretty stained glass lamps were the real deal, but usually the lamps were among the legions of excellent reproductions on the market. As I walked to my car, warmed by the strong June sun, a trill of excitement sped my pace. What Fred neglected to mention was that sometimes they were right.