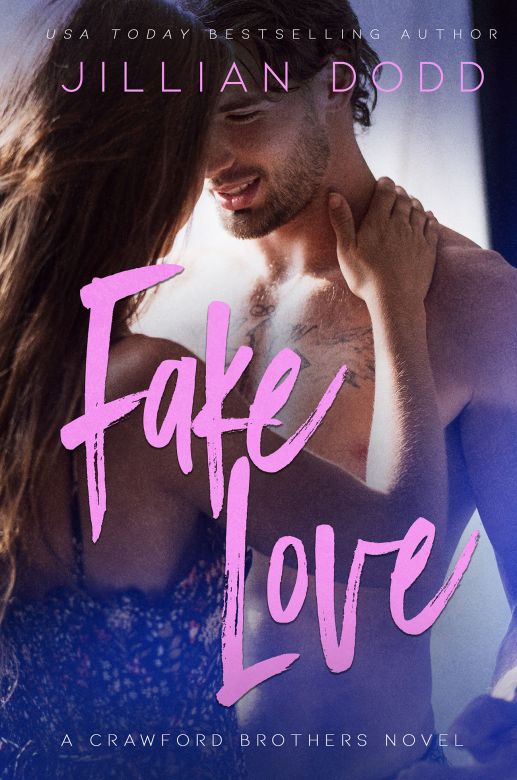 When sports agent Carter Crawford and supermodel Vale Martin meet, they have an instant connection and a really fun night together.

She calls and says she’s in town.

He tells her to stop by. They both know what that means.

And it is amazing. Every time.

She doesn’t want a commitment.

So, he does something crazy and buys a ring.

But instead of surprising Vale with a proposal, Carter sees her kissing another man and leaves without telling her.

After months of not speaking, Vale doesn’t call Carter.

And begs him to pretend to be her fiancé at her little sister’s wedding.

And even though Carter knows he’s about to do something crazy again, he agrees.

Because there is nothing fake about the way he still feels about her. 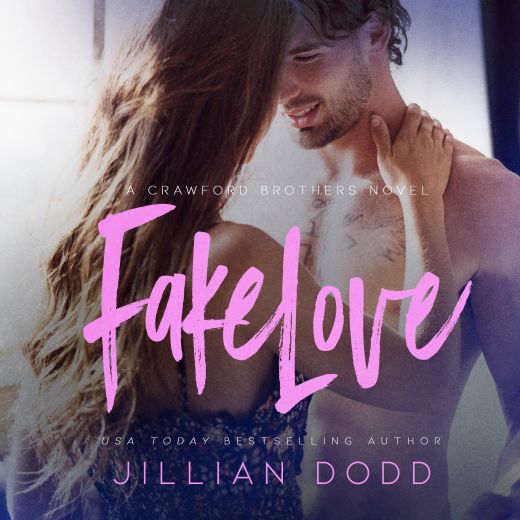 A recipe for disaster.

“It’s freezing out here,” my little sister, Chloe, says as she hands me a beer. “Our brother Cade just married Palmer, the love of his life, and announced they are having a baby, yet you’re out here, looking all depressed.”

“Just needed some air. I’m happy for them, but I’m getting a little sick of all the mushy love stuff.”

“You’re lying. You’re out here, thinking about Vale,” she says.

And she’s right. I’m thinking about how I bought Vale a ring and am considering doing something crazy—proposing to her on New Year’s Eve.

“And I, for one, love the mushy love stuff. Think about it. Mom will get off our backs about having grandchildren now, thanks to Palmer.”

“Do you want that for yourself?” I ask her.

“Hell no.” She takes a pull of her beer. “I like meeting and sleeping with different people. It’s fun. Exciting. When I was in Paris, I met the most amazing people, including an incredible lover.”

“More? No. At least, not right now. But you do, don’t you? You’ve always been the marrying kind.”

“You think I’m the marrying kind?” I ask, surprised.

“Yeah, I do, Carter. You, out of all my brothers, are. You’re a good guy. Genuinely nice.”

“Nice isn’t a bad thing, but Cash and Cade are both stubborn and quick to react. You’ve always been even-keeled. It’s why you were always the best athlete in the family. Nothing flustered you. Didn’t matter if you were up twenty or down twenty, you always played with the same level of intensity. You need to do that in your life, Carter, because sex is not the way to a girl’s heart, and neither is apathy.”

“Remember that time when Vale didn’t show up to our family vacation?”

“Yeah, but what’s that got to do with anything?”

“I overheard you talking to her on the phone afterward—all even and sweet. Fuck that. You want to be the starter? You gotta act like it. You can’t be all, Put me in if you feel like it, Coach. Because all you are to her right now is a good lay. A booty call.

“She invited you to Fashion Week back in October. Do you know what a big deal that was for her? It was announcing to everyone in her world that she liked you. And you went. But what happened after that? Did you send flowers?”

“Did you romance her with anything other than your dick?”

She raises her eyebrows at me.

“I know you can’t keep a secret to save your life, Chloe, but I’m going to tell you anyway. I bought a ring. I plan to surprise Vale at her New Year’s Eve party. I’m going to propose.”

“And she doesn’t know you’re coming?”

“Sounds like a recipe for disaster,” she says, “but to each his own.” She pats me on the back. “At least you’re gonna get off the bench and do something.”

“You know I love you, but I just can’t commit to a family wedding. Sorry, baby,” a deep voice says through my phone. “But we should get together soon.”

I don’t bother with a response, just end the call, sigh heavily, and dramatically throw the phone onto the couch next to me.

This is ridiculous. I’m a supermodel. My face is splashed across the covers of magazines. I travel around the world. Wear designer clothing. I meet new people all the time!

It shouldn’t be this hard to find a damn date for my little sister’s wedding.

Why I need a date so badly that I’d be willing to take a man off the street instead of going alone is complicated. My relationship with my family—my father mostly—just isn’t great. You’d think after all I’d accomplished, he would be proud of me, but he isn’t. It was a big disappointment when I broke up with my childhood sweetheart and left our small farm town—a place I swore I’d never set foot in again—to follow my dreams.

There are a lot of reasons why I shouldn’t go home.

My dad will tell me I’m wasting my time, chasing fame, that it’s fleeting.

My mother will remind me that my biological clock is ticking.

Which will lead them to remind me that I still could have the life they always wanted for me. That it’s not too late. That I could settle down with said childhood sweetheart, Trent, who isn’t married yet.

And it just so happens that Trent will be the best man at the wedding.

After my last-resort date fails me, I consider canceling at the last minute, pretending that I need an emergency appendectomy or something.

But the second I think it, the phone rings.

I answer and find out she’s upset.

And it breaks my heart, hearing her worry about the wedding. Her future. And I know that I could never miss that.

I know what I have to do.

I scroll through my phone one more time, stopping on the name of a man I should have deleted months ago but didn’t have the strength. Because just seeing his name causes my heart to beat faster.

He’s the only man I’ve ever considered settling down with.

The only man since I left the farm to invite me to spend time with his family.

The only man who has broken my heart.

I must be desperate.

The answer is no.

A glance at the screen tells me who is calling, and I answer the phone with a firm, “No.”

“You didn’t even hear what I have to say,” Vale says, her voice always as silky smooth as I know her lips to be.

“How desperate?” I ask, squinting my eyes as my dick springs to attention.

“My little sister is getting married, and I’m calling to ask you to go home with me desperate.”

“Compared to being in jail, foodless, homeless, or injured, I’d say that isn’t very high on the desperation chain.”

“Fine. I’m literally outside your door, on my knees, begging desperate.”

“On your knees desperate?” Interesting. I set down the smoothie I just made, walk to my front door, and open it—surprised to find her there and actually on her knees. I can’t help but smirk. “Not that long ago, I would have found this exciting. But you do look desperate.”

“Three hours? How long have you known about the wedding?”

“January? It’s April. And you, of all people, haven’t been able to find a date?”

“Carter, I can explain. And I will. I promise. But right now, I need you to go pack.”

“I’m not going anywhere with you.” Because I am not. I can’t. Like, I’d do it for anyone but her.

The last time we spoke was when she called and asked how my new year was going. She had that accusatory tone in her voice. The kind women use when they say one thing but really mean another. She thought I hadn’t shown up for her party and was trying to call me on it. Needless to say, I wasn’t having any of that. And when she asked if we could get together the following week when she was back in town, I was still hurting from what had really happened and let her have it. Told her, no, we couldn’t get together. And then I told her that on New Year’s Eve, as the clock struck midnight, I realized that she was not the girl for me. I gave her the easy way out—plus, I didn’t want to hear her excuses. I couldn’t handle it. I was a broken mess. We haven’t spoken since.

She gets tears in her eyes. “You have no idea what it’s like to be a disappointment to your family.”

“You’re a supermodel who travels the world,” I scoff.

“Which is the opposite of what they wanted.” She gets to her feet. “Please, Carter.”

She looks down and whispers, “Because there is no one else.”

“I liked you, Carter. A lot. What you said on the phone the last time we talked really hurt.”

“I’ll say,” I mutter. Even though it’s been almost four months, I’m still not over her. I honestly don’t think I’ll ever be over her.

“I’m just saying that I understand you aren’t the least bit interested in me, but if you aren’t dating anyone, could you possibly find it in your heart to pretend for just one weekend that you still find me irresistible? We always had so much fun together.”

I wouldn’t have to pretend, I think.

“Fine. You want to negotiate, Carter Crawford? Let’s do it.”

The determined look in her eye when she wants something is one of the sexiest things about her. Sure, she’s a supermodel, and she has a beautiful body, but I was always most attracted to her drive. Her passion for life. She is one of the few people who can go toe-to-toe with me in an argument and not back down.

I have to bite my lip to keep from smiling and thinking about how she could practically wrap me around her little finger. How the second she used to call and say she was in town, it would convince me to drop everything and spend time with her.

“The top-rated offensive lineman in the country, AJ Barnett, will be at the wedding. He’s projected to go high in the upcoming draft. And happens to be the groom.”

“Yeah, that’s not much of an enticement,” I say, still trying to play it cool, but when she’s near me, I feel anything but. “I’ve already spoken to him. His family decided to go in a different direction.”

“I know for a fact that he hasn’t signed a representation contract yet.”

“Are you telling me that with the draft less than two weeks away, he is agentless?” My eyes go wide.

“Yes. You’d be doing me a favor and have the chance to earn some major coin. The kid is a specimen, and I happen to know that offensive guards are some of the highest-paid players in the league because it’s their job to protect the quarterback’s blindside. Please, Carter,” she says, folding her hands in prayer. “I need you.”

The way she says she needs me cuts through me.

Her big, beautiful eyes fill with tears, and she looks up at me and says, “Thank you.”