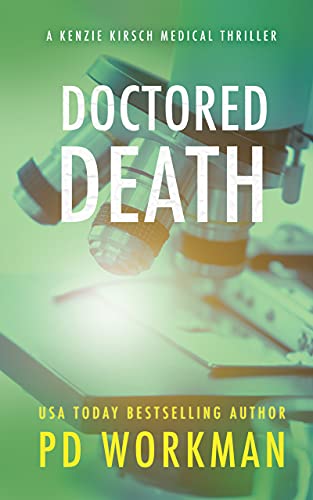 
Assistant Medical Examiner Kenzie Kirsch thinks that the deaths from Champlain House are linked by more than place. If she is right in her theory, the nursing homes, emergency rooms and the morgue are all going to be overwhelmed.


Only she can't get anyone to listen to her. The suggestion of a public health hazard may cause widespread panic, and it is a really bad time politically to be spreading gossip about an unknown contagion.


And Kenzie Kirsch needs to be silenced.


One way or another.


⭐️⭐️⭐️⭐️⭐️Every book by PD Workman that I've read has been a gripping one, however different the genres are, going from lighter mysteries to really dark ones... this is one of my favourite, most dependable authors.


Looking for a strong female lead in an engaging medical mystery? Award-winning and USA Today Bestselling Author P.D. Workman brings you an up-and-coming Medical Examiner's Assistant who is right up your alley.

In the first few books of the Zachary Goldman Mysteries, we had hints of what Kenzie did in the Medical Examiner’s Office and where she wanted to go in her career, and now in Doctored Death, we take a deep dive into her job and the ins and outs of working with Dr. Wiltshire, the Medical Examiner. (If you have read She Was Dying Anyway, you have met Dr. Wiltshire once before.)

Doctored Death was never intended to be a “COVID 19 book” (and does not talk about COVID 19 at all.) But it is about viruses, mutations and genetic engineering, the fear of an outbreak, and trying to get people to see what is going on. Although Doctored Death may start out slowly, it does build up as we begin to figure out, along with Kenzie, just what is going on in Roxboro, Tennessee.

Will awoke in a dark room. He couldn’t remember where he was. He wasn’t sure what had woken him up, but something was wrong. Something was definitely wrong. He sat up and looked around, straining his eyes in the darkness. His breathing was irregular and he had a difficult time swallowing. Was he sick? He must be sick. It looked something like a hospital room.

He needed to talk to someone and find out what was going on. He slid his feet out from under the covers and put them on the floor. It was carpeted rather than tiled like a hospital room normally was.

He realized as he slid out of the warm spot he’d occupied on the bed that he was wet.

Something was definitely wrong. A grown man didn’t wet the bed.

His legs were wobbly and weak. He held on to the bed as he tried to push himself upright. The room lurched around him. He couldn’t find his balance.

He needed to get help. Someone outside the room could help him. If he could just make it to the door and out into the hallway.

He felt for the wall to steady himself. He kept banging his legs against furniture as he made his way around the room. A couple of times, he fell to his knees and it was a struggle to get back up again. Eventually, he decided it was easier to crawl along the floor than it was to walk.

If he just knew where he was going.

He banged his head against something hard. It sent his brain spinning. Blackness gathered closer in to him. A warm trickle ran down his temple. As he lay on the carpet, giving in to the hopelessness of the situation, a line of light appeared across the room. It was too bright, making him squint. The line grew into an elongated rectangle. A partially open doorway?

Will was relieved. Someone was there. Someone had come to check on him and they would tell him what was wrong and help him back to bed where he could rest his head.

But it wasn’t a nurse that came in to see to him. He felt a cold nose and warm snout against his hand and arm. A dog. It moved to his face and sniffed and breathed its warm breath on him, investigating his face, licking him in greeting and cleaning away the blood.

He murmured words to it. He didn’t know the animal’s name, but it brought him comfort to have another living being there with him. He wasn’t alone.

The dog barked a couple of times. That would bring help. Then it lay down alongside him. It was warm and soft.

Will closed his eyes and breathed out.

Kenzie was awakened by the insistent beeping of her clock. She reached over to turn it off, forcing her eyes open. Friday. And she had the weekend off, provided nothing untoward happened that required her at the Medical Examiner’s office. One more day. Saturday she could sleep in. She sat up, hoping that would help to wake her enough to get her day going. She ran her fingers through her wildly curly dark hair to push it away from her face.

She felt the bed beside her to see if Zachary were there, but she knew he wouldn’t be. It would have been more than rare for him to still be in bed when she woke up. It had only happened once or twice in the months Zachary had been sleeping there. After the assault, it had been different. His sleep patterns had become completely erratic and he was frequently unable to get out of bed or to keep from falling asleep where he sat on the couch or in front of the computer. But he was back to his normal routine, and that meant that he was up before she was. Sometimes hours before.

Kenzie pushed herself to her feet and staggered to the ensuite bathroom. She went to the bathroom and then started the shower. She rubbed her hands over her face and looked at herself in the mirror while she waited for the water to warm up. A cold shower might wake her up faster, but she preferred her creature comforts; she wasn’t getting in until it started to steam.

After a quick shower, Kenzie tidied her spiraling hair into some order, put on her makeup, including the red lipstick that would have to be reapplied after breakfast. But she loved the way it looked, so she put it on anyway. She pulled on her usual work uniform. A blouse and slacks topped with a short blazer. Comfortable shoes, since she would be on her feet much of the day. Then she left the bedroom and went down the hall to the living room and kitchen area to see how her partner was.

He didn’t look up from his computer.

Kenzie hadn’t picked Zachary Goldman for his looks. He was a small, slender man with close-cropped black hair. He had been feeling pretty good over the summer, but she thought he might be losing weight again. His cheeks, which had filled in since his last depressive cycle, looked a little thin and his eye sockets hollow. He hadn’t shaved yet and might not. He frequently kept a scruffy three days’ growth of beard. It made him look like a homeless man. Intentionally so. People looked away from him, discounted him, which made his surveillance jobs much easier.

The reason Kenzie was with him was because he was kind and cared about people and he made her laugh. He was also one of the few people she could discuss her job at the Medical Examiner’s Office with. He was interested in the medical mysteries she helped to solve, not disgusted by them.

There weren’t a lot of people she could look at autopsy photos with over dinner.

“Zachary.” Kenzie leaned over his shoulder and gave him a peck on the cheek.

He gave a small start and looked at her. He smiled. “Oh, you’re up.” He stretched and massaged his neck. “I didn’t hear you.”

“Up and dressed and ready for breakfast,” she pointed out, in case the private investigator didn’t notice these clues. “Are you ready for something to eat?”

He stood. “Sorry, I didn’t hear you in the shower or I would have put some coffee on.”

“It won’t take long.” Kenzie picked up a couple of mugs from the side table, one empty and one half-full of lukewarm or cold coffee. Zachary was pretty good about keeping them away from his computer to prevent any accidental spills. Not so great at remembering to pick them up again later.

She carried them into the kitchen and, after dumping the one in the sink, put them into the dishwasher. She started the coffee maker and put a couple of pieces of bread into the toaster.

Zachary went to the fridge and got out the margarine and marmalade for her. They moved around each other, used to the flow of the morning routine. Kenzie put a granola bar in front of Zachary’s chair. His meds made eating in the morning difficult, but he could usually manage one of the chocolate chip granola bars, and the doctor said that anything he could get down was better than nothing.

They both sat down once the coffee was finished brewing and the toast popped.

“How did you sleep?” Kenzie asked. She couldn’t remember him getting up.

Zachary had a sip of the hot coffee and started to unwrap the granola bar. “Not the best night. Restless. But I got a few hours in.”

He nodded. “I tried to be quiet. Don’t like you to be tired at work.”

He gave her a smile. The one he always gave when he was comparing her reaction to how his ex-wife Bridget would have treated him. Criticizing him from disturbing her beauty rest instead of inviting him to wake her up if he needed her. The bemused smile that said he wasn’t sure he deserved to be treated so kindly.

Zachary broke off a corner of the granola bar and put it in his mouth. “Think you’ll be busy today?”

“Things have been quiet lately. I just don’t know if that means they are going to continue to be quiet or we are building up to something big.”

“Hopefully quiet. But not too quiet. Enough that you won’t be bored. But no mass murders.”

“Exactly,” Kenzie agreed, taking a couple of bites of her marmalade toast. “I don’t think there’s any need to worry about me getting bored. People aren’t going to stop dying.”