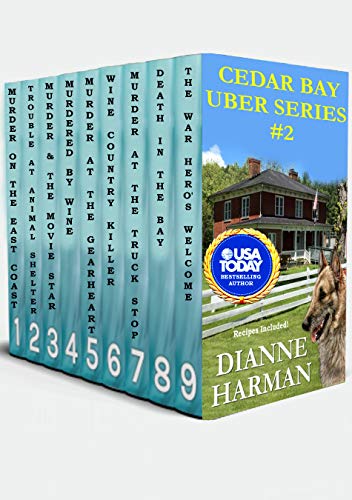 Murder on the East Coast:
Got a price point for committing murder? What about ten million dollars?

Murder & the Movie Star:
Did the famous movie star fall off the cliff or was she pushed?

Murdered by Wine:
She wasn't swimming in the wine vat, she was dead!

Wine Country Killer:
Winery owners murdered in Sonoma, California. A serial killer on the loose. What's the connection? Who's next?

Murder at the Truck Stop:
An invitation to take a truck ride. A dead body at the truck stop. She'd entered a world as alien to her as outer space.

Death in the Bay:
When a man falls overboard and dies in the bay people have to ask if it was an accident or a calculated murder motivated by a changed inheritance? Unfaithful spouses? Revenge?

The War Hero's Welcome:
The war hero returns home with his dog, Wicked. Both have been injured. Their welcome should be pretty straightforward, but not everyone likes a war hero. Maybe Kelly's son, Cash, should have stayed in Afghanistan. At least there he knew who the enemy was!

The author is a USA Today Bestselling Author and Amazon All-Star.