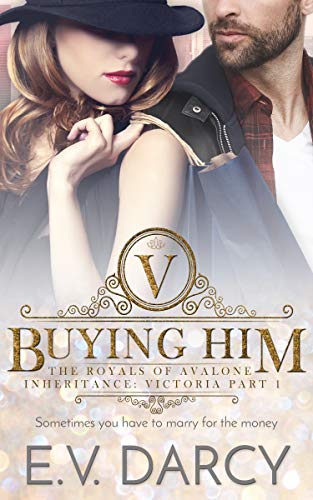 Lady Victoria Snape had always been enthralled by her parents' love story; how her mother, a princess, had defied her father, the King, and married the title-less man she loved. It was a modern-day fairy tale and Victoria had always dreamt of her own great love story... Until her heart was dashed into a thousand pieces.

When her father unexpectedly dies, Victoria has only months to marry before she's cut off and if she loses her inheritance she'll have to turn to her grandfather for support, something she vows she'll never do. She needs a plan, a plan to get a man...

Cormac Blake wasn't trying to be Prince Charming when he rescued the damsel in distress. He certainly wasn't looking for a leg up—or over!—but being penniless and trying to keep guardianship of his six year old brother, makes it hard to refuse offers when people make them. So, when he has two on the table, he has a difficult choice to make; save the damsel or save himself?

Two very different people, one lesson to learn; sometimes you have to marry for the money...

Buying Him, is the first of Victoria and Cormac's story in the Inheritances sub-series in the The Royals of Avalone universe.

‘I’m sorry, can you repeat that, please?’ Lady Victoria Snape asked, trying to process what the old coot in front of her had just said. The solicitor, the supposed best in all Avalone, peered over her late father’s will at her and her equally flabbergasted sisters, as if his words had been perfectly understandable.

But they couldn’t have heard him correctly; their father would never—

The lawyer cleared his throat before he repeated, slowly, ‘The remaining two-thirds of your father’s estate will only be handed down to you and your sisters when—and if—you marry before the age of thirty-five.’

Yes, she had heard him right, and yes, her father had indeed screwed them over. What in God’s name? Why would he put in such a barbaric clause? They weren’t living in Victorian Britain! As had always been the case in Avalone—since they had split from English rule in the sixteenth century—women were treated as equals to men; for as long as men had the right to work and receive an education, women had it too. So why the hell had their father done this?

‘Should you do so,’ the solicitor continued. ‘You will then be granted access to your share of the money—’

‘Access? What does that mean access?’ Lady Henrietta enquired, her eyes narrowed. Victoria, glad her younger sister had picked up on that point, was quickly brought back to there and then, to the finer details of the disgusting clauses their late father had tied to their inheritance.

The lawyer sighed heavily, as if he were dealing with stupid little girls rather than fully grown, well-educated—well perhaps not Victoria—women, and it was starting to get on Victoria’s nerves.

‘Ladies,’ Lady Philippa corrected the man in his address. ‘We are not Royal Highnesses. Never have been, never will be.’

‘Speak for yourself,’ Lady Alexandra sniffed impetuously. Victoria glared out of the corner of her eye towards her youngest sister. Being rich wasn’t the be-all and end-all of their lives, and they were very, very, blessed in that department—or had been until their father died—but their youngest sibling wasn’t on the same page as her three elder sisters. Alexandra wasn’t merely happy with holding the title of Lady, or being a millionaire’s daughter, she wanted a crown, and everything their mother hadn’t been able to give them.

‘Ladies,’ Victoria said with a sigh, calling her sisters back to the matter at hand. She rubbed her temples to try to stave off a headache. ‘Please, go on, Mr. Daven.’ She managed a smile of contempt to the self-important twerp who, she was sure, fully supported her father’s conditions. Perhaps the bastard had even encouraged them. Maybe he’d put the idea in her father’s head.

The lawyer nodded, removed his glasses, and began to fiddle with them as he recollected his thoughts. ‘Once you marry, the balance of your inheritance—allowing for any interest gains—will be held in a trust under your name. You’ll have a yearly stipend from it to ensure that your new family is taken care of—’

‘I can look after myself,’ Philippa muttered, but quickly bit her tongue when Victoria turned the glare her way. They had no idea how much influence the man had over the trust, but Victoria was certain that he had some say in it.

‘Yes,’ Mr. Daven nodded. ‘Of course you can.’ It was clear he didn’t really think she could. ‘But the stipend will be there should you need it. After the birth of your first child, then you’ll—’

‘What!’ Henrietta shrieked, practically jumping from her chair at the final nail in the coffin. ‘We’re being made to breed? Like bloody horse stock? I won’t have it!’ she shouted, smacking her hand on the solicitor’s large wooden desk. ‘I am almost thirty years old. I have attended two of the highest universities the world has to offer, I have a bloody PhD! I have no plans to have children—ever! And I will not be turned into some man’s chattel to get a bit of money and property!’

‘Hear, hear!’ Philippa agreed, standing and joining her sister’s side. ‘And if you must know, I run 2+2—one of the largest accountancy firms in the country… Actually, don’t we do your books?’

‘If they don’t marry, do I get the lot?’ Alexandra asked peering around her older siblings who made noises of disbelief at her question. Victoria merely rolled her eyes, knowing full well of what Alexandra was capable. However, she saw the man shift in his chair, his shoulders straightening, an almost cat’s-got-the-cream gleam in his eye as his dry, shrivelled lips twitched in the corner.

‘Girls.’ Victoria said the single word her sisters knew meant business. Her voice was low, measured, as she eyed the unmoved lawyer; she had a sinking feeling that the baby clause wasn’t going to be the worst thing they’d hear that day.

‘Mr. Daven,’ Victoria said, feigning politeness. ‘Let me get this completely straight, so that none of us have the slightest misunderstanding. Father left a third of his fortune to charities’—the solicitor’s eye twitched at that—‘and left each of us an equal share of the remaining half a billion crowns, but we’re cut off from it and all its assets—the houses, cars, etcetera—until we marry. And we must marry before we turn thirty-five or we’ll never see a bit of it. Am I right so far?’

‘And should we marry before the deadline, we’ll have some access to our inheritance, but we’ll only receive control of our own fortunes once we bear a child?’ Again, the man nodded. Victoria sighed as she rubbed her tired eyes. The unexpected death of their father, the organisation of his funeral, and now… this, was starting to take its toll on her. ‘So, as Alexi said, what happens to the money should we not marry, or produce a child? Is there a time limit on the’—Victoria took a deep breath—‘the baby clause?’

Mr. Daven met the eyes of each one of them before answering, clearly expecting the fall-out that was about to take place. Victoria wanted to wrap her hands around his scrawny little neck for taking such glee from their predicament.

‘Should you marry, you’ll have five years to naturally produce a child—no adoptions, no fostering, no… medical treatments. Should any sister fail to meet any of the stipulations set in the will, their part of the inheritance will be given to the King for—’

‘Over my dead body!’ Victoria declared, launching herself out of her chair. Mr. Daven was unmoved. In fact, it seemed to give him more pleasure, as if he wanted her to react in such a manner. ‘Those cretins will never get my father’s money! They treated Mother and Father like dirt and turned us all into outcasts, unworthy of their time or attention. Hell will freeze over before my grandfather, my aunts and uncles, or my cousins get their grubby hands on a single sliver of our father’s empire.’

‘Then you’ll have to get married.’ Mr. Daven said the statement so matter-of-factly that Victoria knew there was nothing else they could do. ‘And you, Lady Victoria, have barely six months. May I ask, are you currently engaged?’

She narrowed her eyes and lifted her chin at the audacity of the man. ‘No, I am not.’ Even four years after her ex-fiancé had dumped her, it still stung, and she was sure that love was not in her future. It wasn’t that she hadn’t tried to find someone since, it was just that in comparison to her sisters, her cousins, and even her friends, Victoria wasn’t exactly noteworthy for her looks. Or her brains. Not even her career ambitions.

No, there were only two things that endeared Lady Victoria Georgina Snape to men’s hearts: her royal connections and her father’s money. Maybe it was time to use those assets to her advantage.

She stared at the lawyer who seemed to smirk at her as he slid his spectacles back onto his bony nose.

‘I’ll have my secretary send you all copies of the stipulations and conditions,’ Mr Daven said, peering up at them over the thin golden frames. ‘And the rules for each that must be followed.’

‘Girls.’ Victoria addressed her sisters, but she kept her eyes firmly on the man in front of her. She would get married, she vowed as she stood and glared at the solicitor, even if she had to pay someone to take her! ‘We’ve got a wedding to plan!’