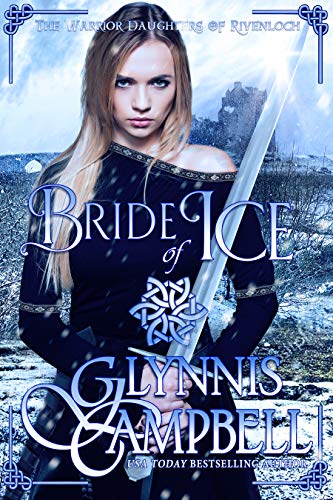 From USA Today bestselling author Glynnis Campbell... A lovely warrior lass with ice in her veins takes a Highlander hostage in order to ransom her kin, unaware she has invited a self-made champion into her keep, one who means to earn her respect, charm her clan, and melt her heart.

Cool and commanding warrior maid Hallidis Cameliard's destiny has always been clear—a husband appointed by the king and eventual reign over Rivenloch. So when her cousins are captured by a Highland laird, she takes charge, seizing the laird's right hand man as leverage. Captive Colban an Curaidh knows his clan cannot afford war, so he counts on his honor to keep the peace, charming Hallie's clan and melting her heart. But when he offers her more, fate snatches away her one chance for love, and only the desperate act of a champion with nothing to lose can give them the happiness they deserve.

BRIDE OF ICE
Book 2 of The Warrior Daughters of Rivenloch
One bride of Fire... One bride of Ice... One bride of Mist... Born into the Rivenloch clan of warriors, Jenefer, Hallidis, and Feiyan, three fearless and fierce Scots lasses, are ready to battle the world, until heart-melting heroes arrive to challenge the spirited brides, storming their defenses and winning their hearts with the power of love.

Hallidis Cameliard and her cousin Feiyan stared at the gaping hole in the storeroom wall, peering into the long, dark tunnel that led from Rivenloch castle to the woods. For a moment, neither of them could speak.

Then a single word fell from Hallie's lips like a cold curse. “Jenefer.”

Feiyan crossed her arms and sighed in disappointed agreement. “Jenefer.”

Hallie knew Jenefer was impulsive and impatient. But the three cousins had made a pact. They'd vowed that whatever action the Warrior Daughters took against the invader, it would be together.

Jenefer had broken that pact. Using Rivenloch's secret passageway, she'd stolen off into the night to face the enemy alone.

Hallie had hoped they wouldn’t need to face the enemy at all. By her reckoning, their parents would return on the morrow with good news. Everything would be decided without resorting to underhanded tactics.

“Maybe ‘tisn’t too late to stop her,” Feiyan offered. “I’ll get my weapons.”

“No weapons,” Hallie said, catching Feiyan’s arm. “No one’s starting a war on my watch.”

Feiyan’s eyes simmered with rebellion. But while their parents were away, Hallie had been left in command. Feiyan had to obey her.

As the firstborn, Hallie would one day take her mother Deirdre’s place as Laird of Rivenloch. And she took those responsibilities seriously. Unlike Jenefer, who acted first and sorted things out later.

“But we’ll go after her, aye?” Feiyan asked. “We won’t let her face a savage Highlander alone.”

“Aye, we’ll go.” Hallie drew her brows together. Jenefer hadn’t given her much choice. The three cousins had been sworn allies since they were young lasses. “But ‘twill be a mission of peace.”

“I’ll fetch my cloak,” Feiyan said, whirling away like mist.

Hallie recognized the need for haste. Kin was kin.

But she refused to rush blindly into peril. If Jenefer was in trouble, it was trouble of her own making. The impetuous lass probably deserved whatever she’d started.

The three lasses had been left powerless, reduced to pacing the halls of Rivenloch while their parents were off petitioning the king for ownership of Creagor, the castle and land adjoining theirs.

Since the previous laird of Creagor had died childless, Jenefer had been led to understand the holding would one day be hers.

Unfortunately, Scotland’s thirteen-year-old king didn’t see things that way. The newly crowned King Malcolm had offered the border keep as a prize to a Highlander.

Which was, of course, insufferable.

For generations—from the time their first Viking ancestor had wedded a Pictish warrior lass—the Rivenloch clan had protected the border lands. A long line of Rivenloch warriors had served the rulers of Scotland with loyalty and honor.

To think that a beardless lad sitting upon the throne would snap his fingers and award precious Creagor to a barbarian from the Highlands was unfathomable.

Still, war was not the answer. Their parents recognized that. It was vital to choose one’s battles.

Her mother had taught Hallie about swordsmanship and conflict strategy. But it was the skills of diplomacy and compromise—maintaining the fine balance between what one deserved and what one was willing to sacrifice—that would make Hallidis Cameliard a great leader.

And now, it was incumbent upon her to decide which weapon in her arsenal would best achieve those ends.

She’d have to be swift. Impetuous Jenefer might already be neck-deep in trouble. But Hallie wouldn’t go unprepared.

Tossing back her long blonde braid, she gathered her skirts and hurried toward the armory to speak with someone she could trust.

“I don’t trust the lass,” Rauve d’Honore admitted, shaking his shaggy head as he sharpened his sword on the spinning whetstone. “Your hotheaded cousin acts ere she thinks.”

Hallie scanned the armory. Three knights chatted in one corner. Two more were occupied, polishing their chain mail. They were safely out of hearing.

Rauve let the wheel slowly grind to a halt.

He scowled in disapproval.

That scowl could make grown warriors quake. Especially since Rauve towered over nearly everyone. Even Hallie, who possessed the height of her Viking forefathers. Like a grizzled black bear, Rauve could send foes scrambling for their lives with a snarl and a roar.

But Hallie remembered being bounced upon Sir Rauve’s knee as a lass. He’d taught her to fight and picked her up when she’d bloodied her knee. There was no warrior more fierce, no defender more loyal than Rauve d’Honore.

“You’re not going alone.” He wasn’t asking her. He was telling her.

She arched a fine brow. “You’re not coming with me.”

“I need you here,” she said. “I need you to take command of Rivenloch in my absence. Besides, I’ll have Feiyan with me.”

He scoffed. “That wee mouse?”

“That wee mouse flipped you onto your back yesterday,” Hallie reminded him.

Feiyan might be a bit of a thing. But her unique fighting skills—learned from her mother’s servant from the Orient—served her well. She’d quickly humbled Rauve on the practice field.

Rauve grumbled and rubbed at his graying black beard with his battle-scarred paw. He sheathed his sword. Then he plucked Hallie’s blade from where it hung on the wall and pressed it into her hands.

She shook her head, refusing it. “’Twill be a battle of words, not weapons.”

His black eyes widened. “You cannot know that. Besides, in the woods? At night? Dangers lurk in the forest. Thieves. Miscreants. Wolves.”

A snort of a laugh escaped her.

Everyone knew the story of Hallie and the wolf. As a lass, Hallie had befriended an orphaned wolf pup, which she still spotted on occasion in the forest. Legend said that as long as the beast roamed the wood surrounding Rivenloch, no wolf dared harm Hallie.

Thieves and miscreants Hallie could handle. Wolves she didn’t fear in the least.

Rauve frowned, biting back a curse.

“You won’t delay,” he threatened.

“We should be back by morn.”

“See that you are,” he groused, “unless you’d like for your father to string me up by my beard and feed me to the crows.”

That made Hallie smile. Her father would do no such thing. Sir Rauve was his most faithful knight. Only once had Rauve dared to disobey Pagan Cameliard, and that disobedience had saved her father’s life.

If all went well, she'd return by sunrise, well before her parents.

“I need you to promise me one thing,” she told Rauve. “No matter what happens, you are not to march on Creagor. I cannot start a war with the neighbors.”

Rauve looked deeply unhappy about that. “So you’re going alone and unarmed. In the dead of night. To try to rein in your hot-tempered cousin. Who may have riled up a savage Highlander. And you’d like me to sit on my hands?”

He muttered under his breath. Giving the sharpening wheel a kick, he laid the edge of Hallie’s sword against the spinning stone. Sparks flew. The harsh whine of the blade sounded like an angry wildcat.

Now that Rauve’s cooperation was secured, Hallie wasted no time.

She and Feiyan departed Rivenloch by the underground passageway, the same passageway Hallie’s mother had used years ago to save her father. They emerged deep in the wood and set out for Creagor.

Hallie’s mind, however, was anything but silent. She raced through various scenarios and courses of action with duty and determination.

As they neared Creagor, she drew her cloak about her. The air was colder and windier than she’d expected. If Jenefer had stuck to their original scheme—frightening the superstitious Highlander away by feigning to be an evil spirit—she must be half-frozen by now in her sheer and ghostly disguise.

It was just as likely that forthright Jenefer had simply marched up to the keep with her bare blade, demanding the castle be surrendered to her.

Whatever she’d done, it was up to Hallie to make things right. Effective leadership required that she consider all possible outcomes. That she be ready for anything.

Still, nothing could have prepared her for what she found when they finally reached Creagor.

Beyond the copse of trees at the edge of the wood, down a long, gradual slope, surrounded by a wooden palisade, the castle gleamed like a pale gem in the moonlight.

The grass of the vast clearing was bedewed by shimmering crystals, frozen by the chill night air and stirred by the wild wind that blew through the glen.

But the magical peace of the landscape was broken by the scuffle taking place on the sward below.

Their cousin Jenefer was grappling with a giant.

He was armed with a claymore.

And she was as naked and defenseless as the day she was born.