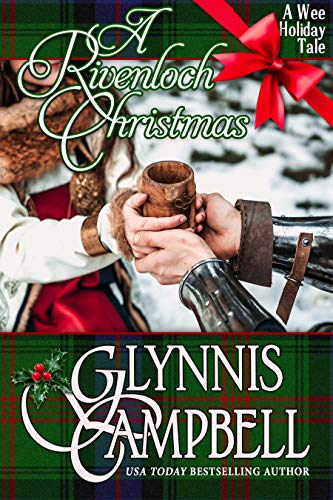 From USA Today bestselling author Glynnis Campbell...A holiday reunion at Rivenloch turns into a desperate search for three missing seven-year-old cousins, lasses who are as impetuous and daring as their warrior mothers.

Deirdre blamed the mistletoe. If her incorrigible husband hadn't scattered the wicked plant all over Rivenloch in the spirit of his Norman Noël, none of what happened would have happened.

It wasn't as if they'd never had Christmas at the castle before. Deirdre's Viking father had built a chapel in the courtyard for her Christian mother so she could celebrate her holy days. When Deirdre's mother passed away, the clan continued to mark Christmas in her memory—with a few sprigs of holly, a sizable feast, and a word or two of thanksgiving. But that was all.

This year, however, Deirdre's husband Pagan had decided that wasn't enough. When Deirdre's two sisters, Helena and Miriel, announced they were bringing their families to Rivenloch to spend the holiday season together for the first time in three years, Pagan had insisted on decking the castle halls in full Christmas splendor.

Deirdre couldn't tell him nay. She'd never been able to resist her husband. Especially when he gazed at her with such childlike enthusiasm. So she indulged him, even though she knew her practical sisters would never appreciate his efforts.

True to form, warlike Helena muttered that the festive boughs of holly were hiding all the glorious shields of defeated enemies hung on the walls.

Thrifty Miriel confided that the beeswax candles lighting every inch of the great hall seemed a great waste of coin.

The sisters' father, Laird Gellir, grumbled into his white beard, irked by anything at odds with his Viking Jul.

Her sisters' husbands, however, were quite impressed. Like Pagan, they had Norman blood in their veins. The décor likely reminded Colin and Rand of home.

But it was their collective children's wide-eyed wonder at the colorful mummers Pagan had hired to reenact the birth of Jesus that convinced Deirdre she'd been right to let him bring Christmas to Rivenloch.

An enormous log, large enough to burn for twelve days, was hauled in from the forest and placed on the fire.

The entire clan crowded into the hall for a giant feast—the first of twelve, featuring roast boar with all the trimmings.

Carolers and a consort filled the hall with song.

That was when the cursed mistletoe began to wreak havoc in the household.

Pagan had hung it in every corner.

And from every beam of Rivenloch's great hall.

The irksome sprigs were everywhere.

And when Deirdre innocently asked what the mistletoe was for, Pagan had been only too glad to show her.

Of course, when they arrived, Colin and Rand had to demonstrate its use to their wives as well.

Currently, Deirdre watched the mummers from the foot of the corner stairs of the great hall. She had to smile at the way her four children were gazing at the spectacle in slack-jawed amazement.

She absently rubbed a hand across her belly. Nothing showed yet. But soon there would be a fifth to add to their brood. She planned to tell Pagan tonight, after the performance.

Of course, the announcement of one's fifth child wasn't terribly surprising or newsworthy. Still, she knew Pagan would be pleased. He was a doting father who took great pride in their growing army of warrior lads and lasses.

Her gaze again slipped sideways to observe her children—Hallie, Gellir, Brand, and Julian. There was her devoted husband now, crouched between the two lasses. He was pointing out the bright star painted on a screen behind the players.

Sometime after the mummers' Mary and Joseph had secured lodging at a stable, and before the three kings arrived with gifts, Pagan left the children. He sidled up to Deirdre, wrapping an arm around her waist.

She sighed in pleasure and snuggled closer. Even after all this time, she never tired of his affection.

Then he cleared his throat.

She glanced at him.

He was giving her that look. The smoky, sparkling, gray-green gaze that always made her heart beat faster.

The knave. He knew very well what that look did to her. And when his eyes lifted to indicate the branch of mistletoe dangling from the archway, it didn't matter that they'd been wed for seven years. Her heart fluttered like a windblown pennon.

Thankfully, he pulled her into the shadows of the stairwell to claim the kiss she owed him. After all, one lavish spectacle in the great hall was enough.

Pagan tasted like sweet mulled wassail. Apple and cinnamon and ginger. She drank his desire with eager thirst.

He cradled her jaw with one battle-callused hand, sweeping the pad of his thumb across her cheek.

The fingers of his other hand traced the upper edge of her gown, toying with the silver Thor's hammer she always wore around her neck. Then they dipped dangerously low beneath the linen of her shift. He stroked the top of her breast with a feather-light touch.

When the rogue delved farther to graze her nipple, she gasped and pressed closer. Beneath his belt, against her abdomen, she could feel firm evidence that he had more in mind than just kissing.

She moaned with anticipation, weaving her fingers through his thick, freshly washed curls.

Curls that wound loosely around her knuckles like a fond caress.

Curls as warm and golden as the blaze burning on the fire.

Curls he'd passed on to two of their children and...

She let out a sigh of regret.

A tiny frown settled between her brows as she pulled away.

"What children?" he murmured, easing forward for another kiss.

But Deirdre, as the eldest daughter, had always been the responsible one. That was why her father had entrusted her with the lairdship of Rivenloch. As much as she longed to continue their play, she placed a restraining palm on Pagan's chest.

"We can't just leave them..." she trailed off. Leave them what?

"Leave them what?" Pagan said, echoing her thoughts with a sly grin. "Completely enthralled by the Christmas play? Happy as a litter of pups? Safe in the company of the entire clan?"

He was right, of course. The children were safe. They'd never miss their parents. In fact, everyone in the hall was so well entertained, Pagan and Deirdre probably wouldn't be missed by a soul.

She answered his smile. Lord, he was irresistible. Especially when his eyes smoldered like that.
He tilted his head to trail kisses down the side of her neck. Delicious shivers coursed through her. Like sword iron in a hot crucible, her knees melted beneath her.

After that, she had no willpower whatsoever.

Somehow she managed to stagger up the stairs to their chamber.

When he closed the door behind them, Deirdre wasted no time. Breathing heavily, she backed toward the bed and slipped the dark blue velvet kirtle from her shoulders.

He advanced, sliding her sleeves ever lower to nibble at her exposed flesh.

Meanwhile, she seized his leather belt, unbuckling it with practiced haste and casting it aside. It slithered across the oak floor like Eden's tempting serpent.

He swept the gold mesh coif from her hair, and her long tresses tumbled over her bare shoulders.

Hungry to taste his warm flesh, Deirdre wrenched his indigo surcoat down. It lodged across his broad shoulders. She went for her dagger, intent on slicing through the laces.

But Pagan seized her wrist and halted her with a sensual chuckle. "Patience, wench. You know, they untie."

With a wicked twinkle in his eyes, Pagan slowly spread the laces and drew the surcoat over his head. He tossed the garment onto the chest at the foot of the bed. Then he hooked his thumbs expectantly in the waist of his trews, perusing her from head to toe.

She unbuckled her own belt and dropped it to the floor. She kicked off her soft leather shoes. Finally, with her eyes fixed on her husband's cocky mouth—the mouth she wanted to feel over every inch of her skin—she lifted the kirtle off over her head.