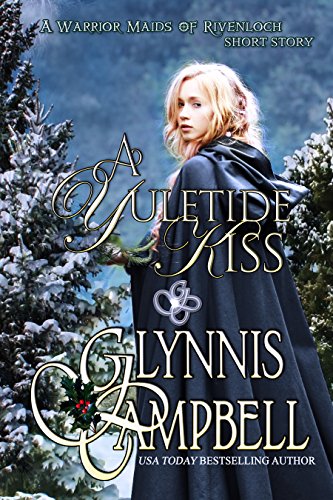 Kimbery from "The Shipwreck" gets her own story!

From USA Today bestselling author Glynnis Campbell...A half-Viking shieldmaiden has until Yuletide to choose a bridegroom...or one will be chosen for her.

Half-Viking shieldmaiden Kimbery of Rivenloch has until Yuletide to choose a bridegroom...or one will be chosen for her. But when the barbarian Brude the Brutal travels to claim his betrothed, he finds himself bewitched instead by a runaway bride.

The way the harlot had burst in, as if chased by demons, made Brude think his brothers had forced the woman to do their bidding. And that he couldn't allow.

Then, when she turned and he saw her delicate features—her fair and beautiful face, framed by the soft gray of her hood, her wide and innocent blue eyes, her tender pink lips—he knew this had been a mistake.

Now that she'd laid eyes on him, she would surely run in horror from the room.

In fact, after she'd given him a cursory glance from head to toe, as if she were sizing him up for a coat of chainmail, she gave him a fearless nod of approval.

For an instant he was stunned.

Then a loud banging against the door made her curse in surprise.

He clapped a hand to the hilt of his sword.

But before he could draw steel, the lass threw herself at him.

She was stronger than she looked. His shoulder blades hit the wall with a thud as she knocked him backward, clinging to his hauberk. He raised his hands defensively, not wishing to do her harm.

When another pounding broke the latch on the door, he expected his brothers to come charging in.

His first instinct was to protect the woman.

But he was prevented when she seized the back of his neck and pulled his head down to hers, pressing her lips against him in a forceful and demanding kiss.

At first, he was too shocked to move. Her mouth felt soft and foreign, inviting and compelling. For an instant, nothing else seemed to matter.

But the commotion of the intruders crowding into the doorway finally won his attention. As he pulled away and peered over her hood, he saw several blond giants mixed in with his brothers. Vikings. Perhaps they wanted the beauty for themselves.

He glanced down at her hooded face, which she was keeping carefully concealed from the others.
She looked up at him with beseeching blue eyes, wordlessly begging him not to give her to them.

At that moment, his brother Taran growled at the Vikings, "How dare you interrupt a man at his bed sport."

"Bed sport? Bed sport!" one of the Vikings exclaimed. "That is no harlot!"

The lovely blue-eyed maid suddenly hissed a whisper at Brude, "Kiss me!"

A second blond warrior crossed his arms over his chest. "If she's a harlot, I'll eat my helm."

"If she isn't a harlot," Galan said, standing nose-to-nose with the Viking, "I'll eat your helm, and I'll take my coin back."

The lass in his arms skewered Brude with a poisonous glare and bit out words in a harsh whisper. "Kiss. Me."

She wasn't the first woman to look at him with such viciousness. He was used to hateful leers. The few women who weren't terrified of him despised him.

What he wasn't prepared for was the sharp point of the woman's dagger pressing against his ballocks.

Needing no more convincing, he lowered his head and gave her what she demanded. She withdrew the dagger.

Somewhere, distantly, as he reveled in the sensual pleasure of her kiss, he heard the Vikings deciding they'd made a mistake, that she couldn't possibly be the woman they sought after all.

But Brude scarcely noticed when they closed the door. Nothing could distract him from the intriguing sensation of the woman's yielding mouth, the fresh fragrance of her skin, the warm caress of her gentle breath on his face.

Kimbery meant to end the kiss as soon as she heard the door close.

She just never heard it close.

Instead, a hot and sultry wind rushed through her ears, swirling around her head, blocking out all other sound, blowing through her soul with devastating force.

The kiss went on and on—gentle, searching, sweet. The warmth of his flesh thawed her winter-chilled face. The masculine rasp of his beard against her skin excited her. The unexpected suppleness of his lips made her ache with tenderness. It felt like she'd waited all her life for this.

Then the dagger dropped from her limp fingers and hit the floor.

The sound split them apart faster than an axe.

She staggered back, blinking as if awakening from a dream.

The man looked just as astounded. There were still stern creases in his forehead, but the dark fire in his eyes had softened to smoldering coals. His jaw, unyielding before, was now relaxed, and his mouth—his delicious, warm, supple mouth—was open in wonder.

Flustered, she averted her gaze.

He bent down slowly, intending to retrieve her dagger.

Panicked that he might confiscate it, she dove for the weapon and rose, brandishing it before her.

Backed against the wall, he had nowhere to go.

She licked her lips. Now what was she going to do?

For a long while they only stared at each other. Finally, he narrowed his gaze at her, drilling into her with his night-black eyes.

She stared back at him, working out the best reply.

If she said nay, he'd call the Vikings back and turn her over to them.

If she said aye, he might be more willing to assist in her escape. Of course, saying aye also came with the risk of certain entitlements he might expect.

On the other hand, how much could he do while she held a dagger on him?

"Aye, of course I am," she said, challenging him with a lift of her chin.

"You're here of your own free will?"

"And you were paid?"

"That's right," she said. At least, she thought that was right. That was how it was usually done, she assumed. A harlot would be paid before she... Kimbery gulped.

"Then why are you holding a dagger on me?" he asked.