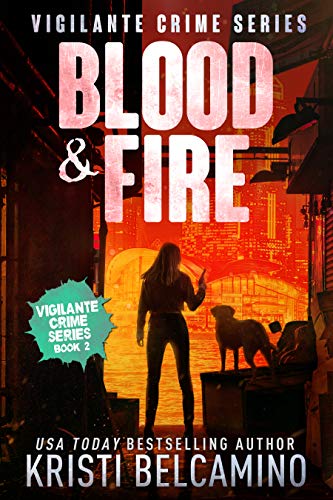 Although Rose escaped from the Sultan years ago, the deadly cult leader continues to torment her.When he killed her boyfriend, Rose vowed to devote her life to hunting him down.Now, her search has led her to a small Australian town where a girl’s body was found surrounded by candles and bowls of blood.As Rose digs deeper, she soon finds herself the target of a dark, ancient evil.Authors Note: Blood & Fire is a fast-paced, edge-of-your-seat, gritty thriller with a flawed but big-hearted vigilante heroine who loves nothing better than kicking butt and taking names for those who can't do so themselves.

Tilly O’Brien shed her light wrap on the beach and stepped into the warm, turquoise waters of the Southern Ocean wearing her bright orange bikini. She splashed through the water until it was deep enough to submerge herself and swim.

She credited her daily swim out to the floating dock for the body she had at fifty-four. Her husband, Tom, said she gave younger women a run for the money with her figure.

Behind her on the shore, her golden retriever, Honey, barked furiously and ran up and down the shore, not quite letting the lapping waves reach her paws.

It was a game they played every morning. Tilly went for her swim, and Honey remained on shore, afraid of the water—poor darling—and barked. She would carry on for a good fifteen minutes and then lay down, her chin on her paws facing the water, waiting for Tilly to return to shore.

Tilly flipped onto her back to do some backstrokes.

She didn’t worry about Honey disturbing the neighbors with the yapping. Their house was at the end of the road, where the Mornington Peninsula came to a point. It was perched high up on the bluff overlooking the Southern Ocean to the southeast. On a clear day, you could see Port Phillip Bay and Melbourne to the Northeast. The historic stone house had been in Tilly’s family for generations. After so many years, the house was worn and possibly a little bohemian and ramshackle, but it would still sell for millions because of the location, the view, and the privacy it afforded.

Tilly and Tom joked that they’d never in a lifetime be able to buy a home like theirs and were eternally grateful that somewhere down the line, one of Tilly’s ancestors had the foresight to buy the land and build the house. It was truly their own little slice of heaven on earth.

Despite offers from billionaires to buy the place, they had vowed to live there until their dying day and then donate it to the parks system.

They’d grown used to the privacy, so if any stranger appeared on the road, it was a bit alarming.

Most vehicles that drove out to the point turned before the road to Tilly’s house. The signs along the main road clearly marked the exit to the popular beach, even though the beach in front of their house was a public beach as well.

Sometimes, however, people didn’t pay attention and ended up on the road. It wasn’t private, but it led only to her house and a few places on the way to pull over on the shoulder and enjoy the view. There was one spot where an old wooden staircase led to the beach, but it was quite a way down from their house. Sometimes people who missed the turn off for the popular beach, stopped there and walked down the stairs to the shore. Even more rare were the locals who occasionally came and swam at that part of the beach. Usually, if they ventured toward the big stone house, it was only to stretch their legs—they’d walk to where the sand ended at the rocky outcrop and then turn back.

That’s why when Honey’s bark sounded different—further away—Tilly lifted her head out of the waves to look. She was surprised to see Honey turned away from the shore. Instead of on the beach near the steps leading up to their house, Honey was now down the beach toward the town, facing a grove of thick trees lining the main road.

Possibly a stranger had stopped on the road above the grove and was looking down at the sea. It was a spectacular view.

Tilly laid her head back down in the water and kept swimming, but then Honey’s barks took on a ferocious, vicious tone.

Curious, Tilly flipped over onto her stomach and swam back to shore.

Her swim to the floating dock would have to wait.

On shore, Tilly stepped onto the warm sand and shook the water out of her short blonde hair. As she walked, she scooped up her wrap and wiped her face.

Honey was still barking and now also whining. Out of the water, Tilly could see that Honey wasn’t looking up at the road, but was instead near a clump of rocks at the base of the hill. The beach was narrow at that point, and during high tide, part of that area was submerged, making for a fun place to look at tide pools and examine sea creatures. The tide was low today, and Tilly wondered if some poor creature had been caught on shore.

One year, when Tilly was an adolescent, a baby seal had become separated from its mother in that spot. The mother had stayed in the water nearby until Tilly’s dad helped steer the baby back to the ocean.

It had been a very exciting day in Tilly’s life, as she loved seals. She still had a photograph of the baby seal somewhere.

But Honey, who normally wriggled with excitement and licked small kittens until they fell over, sounded less excited about a fellow creature. She sounded distressed.

Alarmed, Tilly picked up her pace to a jog.

When she grew closer, Honey began to whine even louder and looked up at her mistress.

At first Tilly wasn’t sure what she was looking at. Expecting some type of sea creature, her brain calculated what she would logically be looking at and for a split second made the leap that the pale, long piece of flesh was a bleached-out eel. But there was something wrong with it. It was shredded at one end—a jumble of torn white and pink and yellow flesh and fat and skin. At the other end was a hand. A small hand.

Tilly clapped her hand to her mouth in horror.