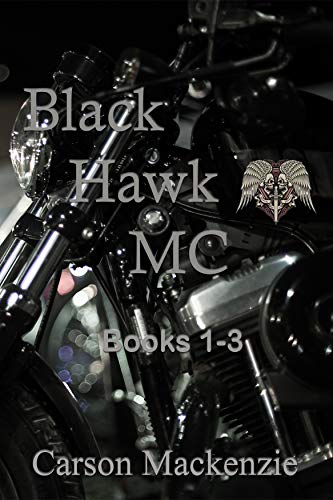 Speed - Book 1: Kane “Speed” Weston, after leaving the military, returns to Black Hawk MC, the club he grew up in, the only family he has left. With his father's spot open, he prepares to fill the position. What he finds upon his return, the military nor the MC could have prepared him for.

Sami Borelli was raised in an MC. With her father being the president of the club, she'd been referred to as a princess, feeling anything but. Sami moved to Black Hawk territory when her father's club faced internal problems, turning her into a liability instead of an asset. She met a man at a club party who changed her life, but when she went back, he was gone, only to return years later with no memory of her while she remembered everything about him.

Crusher - Book 2: Russ "Crusher" Davis will take over as president of Black Hawk MC when his father steps down. He realizes the job isn't going to be easy, but with his friends, the club's support and loyalty of its members behind him, there are no problems he can't solve.

Carly Monroe has been raised in one club and protected by another but has no trust in either. Club life may work for her friend; however, she has no plans to follow in her footsteps, not for Sami or for the man whose touch puts cracks in the wall she's built around her heart.

Devil - Book 3: Lance “Devil” Cummings had put the past behind him for the most part until recently when he watched two of his brothers take the fall, bringing front and center everything he had lost. For his friends, he couldn't be happier, but for himself - he couldn't deny he wanted what they found – the one person meant to be his solace. What haunted Devil the most, was that he'd met her, possessed her, and then let her go.

Bailey Tolson left the bad memories behind when she moved from Shades Valley. When she returned to help her mother recuperate there was no time to spend focused on the past, at least until he walked in the door of her mother's business.

Two people – one past. One with questions – one with the answers.