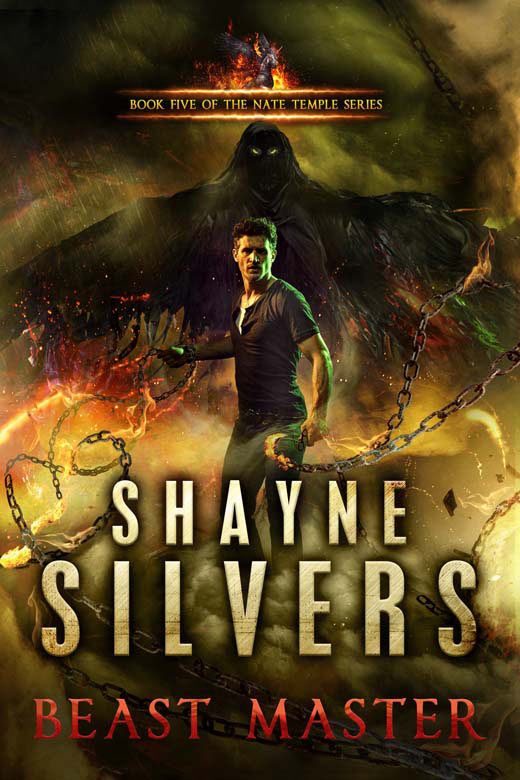 Oh, and host Friendsgiving for his guests—an Angel, Achilles, and Death, just to name a few. Easy-Peasy...

But the Beast Master has come to town, and he's kidnapping shifter kids for his show.

And the Queens of Fae have ordered a little deep-fried wizard for their holiday feasts.

And Nate is losing that last finger-hold on his sanity: hallucinating, and talking to creatures that no one else can see. The demon inside of him is getting stronger, fighting for dominance, and only one of them can survive.

But when Nate's extorted to rescue a lethal Chimera child from the Beast Master's Circus, Nate's only option is to partner with his inner demon, risking his very soul. But his friends begin to doubt and fear this new, darker Nate, taking matters into their own hands—even when that means standing against him.

With allies turned enemies, the Fae breathing down his neck, and a dangerous child's life on the line, Nate must call upon, bully, and coerce new storybook legends and gods to save his traitorous friends from becoming the Beast Master's next victims...

Discover what—if anything—Nate is willing to sacrifice to save the friends who betrayed him... 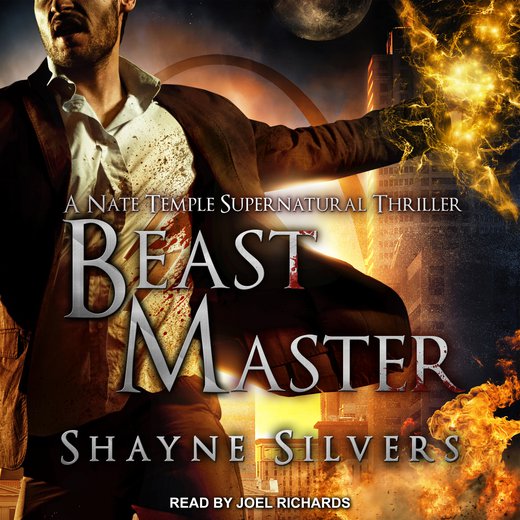 It was madness, bullets, arrows, and even a spear, flying every which way, pelting antique portraits of long deceased family members, priceless vases, and other worldly objets d’art. A nearby glass-paned cabinet of curiosities was struck twice in quick succession.

The cabinet was filled with dozens of random artifacts – an antique pair of spectacles, a watch, several figurines, a bullet casing, and a shot glass – to name a few. Another bullet winged off the corner of the cabinet as I ducked. Luckily, it didn’t break, the glass made of something stronger than your typical window. Magical glass, apparently.

Amazingly, nothing had been broken.

But dozens more cabinets filled my ancient mansion – Chateau Falco – and they were now all in danger of being destroyed. Dean was going to kill me.

But there was no time to wonder what my Butler would say about the damage.

All that mattered now was surviving.

I saw a lock of red hair behind the couch and unleashed a barrage of bullets at Ashley Belmont. In rapid defense, her fiancé – donned in a crisp navy blue suit and tie – rained down bullets on my position, sending me ducking back behind the furniture. An Alpha werewolf like Gunnar was not so easily taken down. Especially when someone was trying to plug their fiancée with bullets. At least neither of them had shifted into wolf form.

We had been friends, once, but no longer.

This was war. But my magic wouldn’t help me now. It was off limits.

I caught the swish of a dress out of the corner of my eye as Sonya and Aria – affectionately known as the Reds when together – silently closed in on the Alpha werewolf to cover me. The twin teenagers gripped overly large pistols in each dainty hand, fingers resting on the triggers as their eyes danced with feral instincts. Which looked comical given their cute dresses. They weren’t lethal only because they were female teens, but because they were also weredragons, and the crimson glint in their horizontal pupiled eyes – like demonic goats – dripped with murderous intent. I quickly rolled to my left, finding new cover behind a Guardian statue. The stone sentinels were also useless in this battle; they no longer knew friend from foe.

The world had been turned on its head, pitting friend against friend. I thought about bringing this one to life just to up the chaos factor, but knew it wasn’t a good idea. As soon as I upped my arsenal, my enemies would do the same. And for now, we were evenly matched.

I nodded at Achilles as he stalked the shadows with two short spears that somehow complemented his pressed jeans and cardigan. He barely acknowledged me as he hunted for the missing assailant. But I didn’t have time to join his search, because out of nowhere, Tory – wearing a racy green dress – shouted out in glee, discovering my hiding spot. I bolted down the hallway as she levelled a ridiculously large shotgun my way, and began unleashing round after round, her bullets hammering into tables, the wall, and even smacking the Guardian’s nose to no effect. One of Achilles’ spears sailed from the hallways, but she dodged it at the last second, swinging her shotgun around. She pointed it down at the legendary Greek warrior’s feet and began to unload. He panicked on instinct, hopping up and down frantically. But one of the bullets scored a direct hit to his heel and he collapsed, spear falling to the ground beside his now lifeless body.

A legend had just died.

But there would be no pyre.

Tory belted out a shout of triumph at slaying the infamous warrior.

Then she began yelling for Gunnar to intercept my flight, but Othello emerged from the shadows directly behind her, wearing a nice black dress. “Die,” the international hacker grinned, unleashing an arrow from point blank range straight into Tory’s kidney. The ex-cop (thanks to me) gasped, collapsed, and rolled onto the ground with sounds of anguish, managing not to flash the whole room in the process, despite wearing the low-cut green dress.

I smirked in relief at Othello, who quickly melted back into hiding.

I dove behind another couch, only to find myself directly behind Alucard – master vampire, and onetime friend – who was fidgeting anxiously with his pistol, cursing lightly. “Fucking jammed!” he hissed to himself, not noticing my arrival. The body of Greta’s literal Guardian Angel, Eae, lay before him, eyes closed in death. Even now, he had a smugly pious and judgmental look about him. The undertaker like suit only added to the effect. I would have laughed at the irony of a soldier of Heaven being slain by an agent of darkness, but my gun slipped from my sweaty palms and clattered to the heated marble floor. The vampire rounded on me, startled, but still managed to use his superhuman speed to aim his gun at me. I leaned to the side, just in the nick of time, and his bullet flew wide.

On reflex, I stabbed him in the damn forehead with my knife. His eyes glittered with disbelief from beneath the dagger, no doubt stunned at my choice of targets, before they fluttered closed and he collapsed like a sack of potatoes. I dismissed his body as just another casualty of war, and risked a quick peek over the edge of the couch, trying to discern who still survived.

A bullet whizzed past my ear, and I ducked back down.

I knew the Reds were closing in on my once-best-friend, Gunnar, but his beau, Ashley, wouldn’t let them get away with it. I still had Othello and the Reds on my side, against Gunnar, Ashley, and the Huntress, whom I hadn’t seen for some time now. I ducked back down, thinking furiously. Where is she? I thought to myself, remembering Achilles had been trying to flush her out before he had been slain.

Just then, I heard a loud scuffle as one of the Reds screamed in fury, “Die, wolf!”

I attempted to load my gun, but spilled the fistful of bullets on the ground. Cursing my clumsiness, I risked another glance as I fumbled a few stray bullets into the chamber. Aria was standing in plain sight near the fireplace. Gunnar and Ashley peered around opposite edges of the same couch, teeth shining in the lamplight. I tried to shout a warning, but I was too late to help the tween.

The wolves unfolded from their crouch to hammer her with way too many bullets. She groaned and grunted, falling to the ground. Sir Muffle Paws – all twenty pounds of my adopted Maine Coon kitty – chose that moment to dart between Gunnar’s legs, and he flinched, reacting instinctively as he unloaded his gun at the feline.

The cat bolted under a table with a hiss, and a flash of movement behind the panicked wolves let me see that Aria’s sacrifice had not been in vain. Sonya stood silently behind the mutts, a pistol pointed at each, like a female James Bond villain. “Bad puppies,” she cooed before squeezing the triggers of both semiautomatics. Bullets sprayed the wolves, sending them flipping over the couch and into a chair. Ashley landed in Gunnar’s lap with a loud expulsion of air as she died. Gunnar stroked her face one last time, a sad smile on his bearded cheeks before his eye closed and he let out a drawn-out death-rattle. Sir Muffle Paws darted out from beneath the table, glanced up at the fallen wolves, and then pounced up to land on Gunnar’s chest, settling in for a nice nap before his body cooled.

I stood, winking at Sonya, only to see her eyes shoot wide as her gaze flinched behind me.

But I could tell by the look on her face that it was too late.

“I’ve waited a long time for this,” a cool voice murmured in my ear as I felt the barrel of a pistol press into the base of my neck.

I sighed, dropping my hands in defeat.

Death entered the room, studying the fallen bodies with a detached look on his face. The Pale Horseman of the Apocalypse was, of course, no stranger to death. Literally. He leaned to the right to get a better look at my murderer. “Dead to rights,” he murmured, a dark grin briefly flashing across his face. I had seen his mask before, the skeletal one, and it was downright terrifying. “Dinner is ready,” he added. Then he turned without lifting a hand of support, and left the room.

He had once been my friend, but even he had turned against me this day.

“Time to die, Maker,” the Huntress whispered before pulling the trigger.