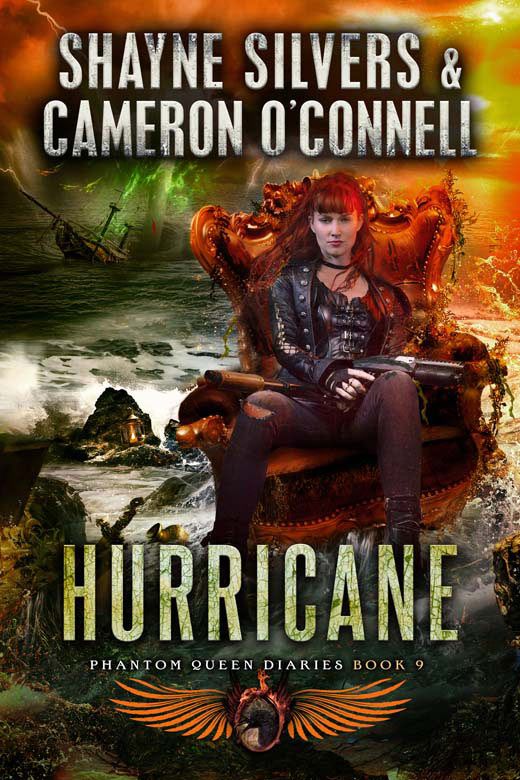 Book 9: The Phantom Queen Diaries
Shayne Silvers Founding author
Follow
Quinn knows she must see order restored to the Eighth Sea if she hopes to save her friends and allies.
Genres: Fantasy action & adventureDark FantasySupernatural suspense
Buy now
Available in:

What's a goddess to do?

After being lost at sea and taken prisoner by yet another denizen of the Titan realm, Quinn finds herself cold, wet, miserable, and very much alone. Until a familiar and unexpected face steps back into her life to remind her who she is—and has always—been: a fighter. Following this revelation, Quinn can only acknowledge that some journeys require circuitous routes, even if that means attaining her freedom and rushing—not to the rescue of her besieged allies—but to the mythical island of Aeaea, home to the infamous witch, Circe, where Quinn will be confronted with cryptic visions of the present and a brutal choice: to sacrifice everything she is on the altar of what she could become, or to continue stumbling around in the dark.

No matter her decision, Quinn knows she must see order restored to the Eighth Sea if she hopes to save her friends and allies. But at what price? The answer to that could cost Quinn her very humanity and will reveal stark truths about her role in the war to come. A war her father predicted and, apparently, prepared for. A war which has already begun to claim the lives of those she cares about and will likely claim many more before all is said and done.

But, before she can worry about any of that, Quinn must go to battle against her old friend and nemesis, rescue her besieged friends, and honor her end of a lopsided bargain—a task which will pit Quinn against her wildest nightmares and her darkest dreams with just one person at her side...a certain mouthy wizard from St. Louis—Nate Temple.

The waters get even murkier as Quinn gets caught in a current that draws her closer and closer to the secrets which surround Atlantis, to the gates of the Underworld and the lost souls which lie beyond, and to the mysterious figure of her father, a wizard so powerful he defied time itself.

Some people like to say that when it rains, it pours. But then they must never have met Quinn MacKenna...because in her case it's always hurricane season.

If you like Jim Butcher, Kevin Hearne, Steve McHugh, Michael Anderle, Ilona Andrews, Patricia Briggs, Shannon Mayer, or K.F. Breene, you won't be able to put down the highly addictive Phantom Queen Diaries or anything else in the Temple Verse.

The nose-wrinkling odor of rusted iron mingled with the briny aroma of the sea, undercut by the musk of wet leather and the reek of rotting fish, filled my nose. Perpetually wet, my hair lay lank across the nape of my neck like a dead animal, and it was all I could do not to retch all over my boots. Of course, if I did, I knew the fetor would only get worse, adding some congealed icing to the already moldy cake. My mute guards—ethereal women with luminescent skin covered in various patterns of iridescent scales, hair like matted seaweed and soulless, pupilless eyes—had fed me nothing but raw fish for days, now; I’d never thrown up seafood before, but I sincerely doubted regurgitated sashimi would improve the bouquet.

Naturally, it didn’t help that the walls of my cell—an aperture so narrow it would barely have fit two of me standing side-by-side—were eternally slick with condensation, the stone sweating even as I huddled on the ground, my knees drawn up, my tailbone aching where it pressed against the unforgiving floor. I’d learned to sleep like that, my head hanging over my folded arms, crunched and freezing. But then, cold had become my new normal; I’d woken up shivering in this hellish place day after day since falling unconscious beneath the waves, uncertain of whether I’d survived, or this was actually some horrific afterlife—the beginning of my eternal punishment.

In order to distract myself from that awful possibility, I dwelled instead on memories of what had happened in those final moments leading up to my captivity, as well as the days which preceded them. Indeed, it seemed I had nothing better to do but play them out again and again in my mind, to experience each recollection anew, re-examining my emotions and sensations like trying to distinguish complex flavors with my tongue.

I felt them reaching for me even now, drawing me away from my oppressive cell with a siren call as tantalizing as what I’d expected to hear when I first sailed through the storm into the Eighth Sea—otherwise known as the Titan realm. I welcomed the diversion; anything to be away from the stink of this putrid place. And so, I dwelt on the weight of Typhon’s monstrous gaze, the sheer vastness of his existence, and how it had felt like looking up at a starlit sky, struck by the infinite nature of an apathetic universe. Other faces, other gazes, soon beckoned. The uncertain, crystal blue eyes of James Pan tracking me as I crossed the deck of his ship, his dark hair twisting in the wind. Tiger Lily’s fierce, predatory smile, her death mask splashed across her face like a promise. Narcissus, fretfully washing his ink-stained palms with the intensity of a cat licking itself clean. Tinkerbell holding a blade with my blood on it, her pink glow so faint I thought an errant gust might blow it out. Helen of Troy, staring up at the sky beneath the shadows of her cowl, her intentions as obscure and indecipherable as her expression.

From there my mind tackled larger scenes, each surfacing haphazardly as though my brain was a novel being shuffled through and read piecemeal, my emotional states bite-sized and easily consumed. Greeting the Laestrygonians and that first blush of optimism. Being ambushed by naked giants, my heart racing. Sailing the Jolly Roger, feeling ironically adrift. Sailing the Crow Boat, feeling deflated. Staring out at a graveyard of ships, but more concerned by the cloaked figure beside me. Staring up at a stunning temple overlooking a cliff face, awed and curious. Falling from so high up it seemed as if I’d never land, certain of death. Thrown from a boat, too exhausted to feel anything. I dissected each of these and more, though I had to be careful not to stray too far; when I did, occasionally I’d encountered memories that belonged—not to me—but to Neverland. These I shied away from. Perhaps it was their alien nature, or perhaps it was simply that any reminders of Eve and Cathal, who I’d left behind to make this journey, made me more melancholy even than the stark reality of my current circumstances. Some hurts, after all, are borne more easily than others.

Footsteps from farther down the chilly corridor startled me from my reverie, likely belonging to the guard I thought of as Lady Clownfish, judging by the wet slap of her feet against the floor; she had delicately webbed feet that resulted in a distinct thwap when she walked. One of only a few guards, she had a uniquely orange cast to her skin, with pale, winding lines that snaked over the contours of her waifish body. Today she wore a white shift I’d never seen before, though the frown she bestowed on me was all too familiar. The stench I’d come to associate with this place worsened as she drew closer and set a tray in the shape of a giant clam shell on the floor within easy reach. Once, I might have grabbed for her, but I knew not to bother, now; she and her companions moved with the uncanny speed and grace I’d come to associate with otherworldly creatures. Besides, they were cautious, apparently as wary of me as I was of them. Of course, I couldn’t blame them; I had tried—and nearly succeeded—to break out of the first cell they’d put me in. Far roomier than my current accommodations, I’d shattered two of its iron bars before I was found and forced at spear-point into this alternate receptacle. In here, unfortunately, I had no leverage—no way to break free, despite my strength. And no privacy, either.

“Here,” I croaked, passing over the bowl I’d been given for my waste. In many ways, that had been the most dehumanizing part of this whole thing; freedom doesn’t mean a whole lot until you have to relieve yourself in plain view on someone else’s schedule. Lady Clownfish wrinkled her nose, but took it away dutifully, leaving me with nothing but the echo of her flopping footsteps and a mound of gutted fish.

I craned my neck, squinting up through the bars of my cage at the faint miasma left behind in her absence. Something lingered out there, perhaps a few feet from where the guard had stood only a moment before. No, not something. Someone. A man—or at the very least it was man-shaped. I rose gingerly, hissing with the discomfort of moving sleeping limbs. I leaned heavily against the bars, pressing my face through the gap as that silhouette became clearer, features and colors materializing out of thin air like a picture coming into focus. When the image finally asserted itself in all its clarity, however, it was all I could do not to jerk back in surprise.

“What the hell are ye doin’ here?” I exclaimed.

“Oh, hey,” Nate Temple said, rubbing his jawline self-consciously as he studied his surroundings, his expression mildly vexed. “Well, damn. This isn’t where I parked my car.”