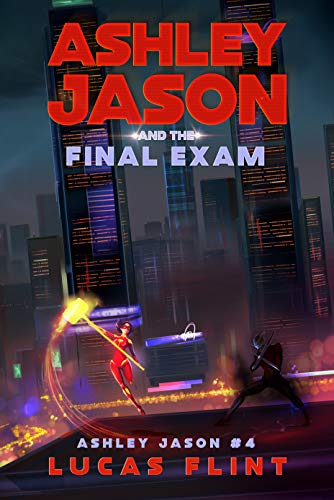 Ashley Jason and the Final Exam

With her tumultuous third year of schooling behind her, Ashley 'Crafter' Jason looks forward to a quiet fourth and final year at the Academy, where she prepares for the Final Exam that will mark her graduation. Yet things are never quiet at the Academy and Ashley soon finds herself facing threats on three fronts.

The villainous Overkill emerges from the shadows to demonstrate a deadly biological weapon that threatens the lives of all supers. At the same time, the Dragon King of Superbia plots to not merely invade the United States, but kill Ashley for daring to oppose his will. And the supervillain terrorist, Parasite, has returned and is ready to end his feud with Ashley permanently.

None of those threats, however, are as dangerous to Ashley as her own genetic disease, which she discovers is on track to kill her before she graduates, thus leaving Ashley with two choices:

Undergo a surgery that will permanently remove her powers and live, but leave her unable to defend herself from her enemies ... or keep her powers and be killed by her own body.