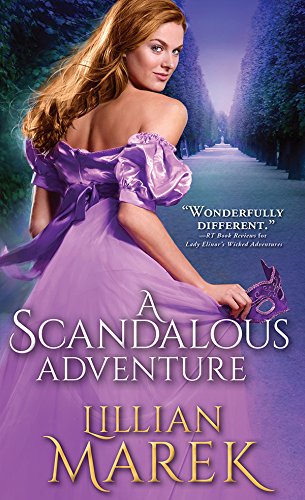 Book 3: The Victorian Adventures
Lillian Marek
Follow
The princess has vanished — can she be found in time?
Genres:
Buy now
Available in:
Keywords: The German Adventure
Share

They're hiding a scandalous secret
When his monarch's flighty fiancée disappears, Count Maximillian von Staufer is dispatched to find her. His search leads Max to discover not the princess, but a look-alike who could be her double. Desperate to avoid an international crisis, he conceives a plan that will buy some time-and allow him to get to know a beautiful Englishwoman.

And time is running out
Lady Susannah Tremaine and her young friend Olivia are staying at the Grand Hotel in Baden, where so far the most exciting part of the visit has been the pastries. But when a devastatingly handsome royal Germanic officer asks Olivia to impersonate a missing princess, Susannah finds herself drawn into a dangerous world of international intrigue as she tries to protect her friend-and her heart.

One of my favorite books of all time is Anthony Hope's The Prisoner of Zenda. And I love the film version as well, with Ronald Coleman and Douglas Fairbanks Jr.

This is my homage to that masterpiece of derring-do.

Lady Susannah Tremaine sank into the chair in the coffee room of the Grand Hotel with a sigh of pleasure mixed with relief. The pleasure was because the chairs were actual upholstered armchairs, not the spindly little things so often encountered in tea shops, and the pastries on display looked absolutely gorgeous. Every one of them was festooned with whipped cream—schlag.

The relief was because she had finally managed to get her traveling companions here without any disasters. That was cause for no little satisfaction. Her mother had sent her along on this trip with instructions to look out for the other two, and Susannah took her responsibilities seriously.

At first she had assumed that Lady Augusta Whyte would be the one who needed the most care. She was, after all, seventy years old, more or less. Aunt Augusta never actually mentioned her age, but Susannah had figured it out, at least approximately, from bits of information the elderly woman had let drop about things she had seen. At such a great age, Aunt Augusta might be expected to need assistance making her way onto and off of a train, or even just walking down the street.

However, it wasn’t the frailty of old age that was a problem. Instead, it was Aunt Augusta’s willingness to try anything once. Or twice. That café in Montmartre she had insisted on having them all visit was definitely not the sort of place a proper young lady—or a respectable old lady—should be seen. At least they had avoided any real trouble that time. Susannah had been able to get them out the side door as soon as the brawl began.

What had surprised her was that Olivia could be a problem. Olivia had been living with the Tremaines for years, ever since her brother had married Susannah’s sister, so it wasn’t as if Olivia and Susannah were mere acquaintances. They were almost the same age and had shared a governess and attended the same parties and gossiped over cups of cocoa. But she had never realized just how naive Olivia could be. When that artist asked her to come up to his studio and pose for him, Olivia had actually considered it. “But he needs a model and he can’t afford to pay one,” she had said.

But now they were all safe at Baden, the spa that had become wildly fashionable in recent years. Of course, it was a bit late in the year for fashion, but Susannah had been looking forward to it. Now she finally had a chance to look around the coffee room at their fellow visitors.

It might be just this hotel, but on the whole, the group seemed rather elderly. Or ailing. Or both. She probably should have expected that. Baden was, after all, a spa, and people came here to be cured by the waters. She just hadn’t expected everyone to be an invalid. Susannah felt almost embarrassed by her own blooming health.

It looked as if the most exciting part of the visit here was going to be the pastries.

Count Maximillian von Staufer, captain in the Royal Guard of Sigmaringen, grunted. Someone was pounding on the door, and that was making the pounding in his head even worse. He tried to say “Go away,” but it came out as just another grunt.

Making an effort, he opened an eye. A misty gray light was sneaking around the curtains. He managed to sit up and get his feet on the floor, but then he had to pause. He rested his head in his hands with his elbows on his knees. What was wrong with him? His head was throbbing as if he had been on a three-day debauch, but he hadn’t been drinking last night. The last thing he remembered was drinking coffee after dinner.

“Captain Staufer! You must come!” The pounding on the door continued.

He lifted his head enough to croak, “What is it?”

The door opened and in tumbled a young soldier—a boy, really, disheveled and with his uniform askew. “Captain, she is gone. Princess Mila has run away.”

Staufer winced at the shrill note of the boy’s voice. “What do you mean, run away? Where could she go?”

“I don’t know, sir. But she is not in her room, and you and the general are asleep...” The boy’s voice trailed off miserably.

Staufer rubbed a hand across his face. He realized that he was still wearing his uniform, though the tunic was unbuttoned. He even had his boots on. Never in his life had he fallen into bed with his clothes on. What had happened to him? Nothing good, obviously, and it could not be overindulgence that was afflicting him. Not on coffee. He straightened up but had to close his eyes until the pain caused by the movement subsided. Stifling a groan, he asked, “What’s your name, soldier?”

The boy straightened up and stood at attention. “Mueller, sir.”

“Very well, Mueller. Suppose you take me to see what you are talking about,” Staufer said as he buttoned up his tunic and ran a hand through his hair.

Moments later he was standing in the doorway of Princess Mila’s room. Her empty room. Some garments were scattered around, but Staufer had no idea if this indicated a hasty flight or if the princess was always this messy. “Her maid?” he asked.

“She is missing too,” said Mueller. “And her guards?” “Gone.” Staufer started to nod but remembered nodding did

not help the pain in his head. The young soldier was doing his best to stand tall, but he looked terrified. “Don’t worry, Mueller. This is not your fault.” Staufer tried to think. “You must answer me truthfully. Who else knows about this?”

“No one, sir. I came to relieve her guard, and when I couldn’t find anyone here and couldn’t wake anyone in the general’s quarters, I went to you.”

Staufer rubbed his temples and forced himself to remain calm. From the moment they’d left Hechingen, Princess Mila had been nothing but trouble with her whining and her tantrums and her pouts. Her behavior would have disgraced a two-year-old. In an adult it was inexcusable. And now this disaster. Was the insufferable brat trying to cause a scandal?

“You did very well, Mueller. Now you must stay here on guard. If anyone wants to enter, tell them that the princess is indisposed and cannot be disturbed. I will go inform the general.”

Staufer returned the salute, trying to look confident, and headed for the general’s quarters. Everything was much too silent. Was everyone sound asleep? Given the way his head felt—and his stomach was also making protests—he did not think it had been an enchantment. More likely, they had all been drugged.

Blast Princess Mila. He had been sent to escort her to Nymburg, where she was to marry Prince Conrad, and he would do so if he had to put her in chains.

As soon as he got his hands on her.