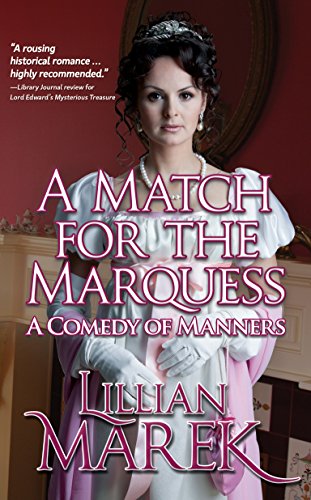 Decisions, decisions...
Should Lady Anne Milhaven marry the wealthy and handsome young marquess, or should she resign herself to living out her life in poverty and disgrace, exiled from the world she was born to?
Should Philip Tremaine, the new Marquess of Penworth, redeem his honor and marry the proud and beautiful earl's daughter whom he has unintentionally compromised, or should he prove himself as dissolute as his contemptible family?
They are not fools, but marriage is only the beginning. They have an estate to restore and reputations to repair. In addition, they must learn to work together if they are to thwart the vile plots of their scheming relatives.
A Match for the Marquess is the prequel to the Victorian Adventures series.

Chapter OneIn which our heroine receives a letter

Lady Anne Milhaven looked at the letter lying upon the salver as if she had never seen such a thing before. She looked up at the butler who was proffering it to her and raised her eyebrows in query.

“A letter for you, my lady,” said Jeffries.

She could swear there was the ghost of a smile on his face.

“Thank you,” she said, offering a ghostly smile of her own.

She reached out hesitantly and picked it up. It had been so long since she had last received a letter that she had almost forgotten what to do. Uncle Craddock required that all mail be given only to him, and in this house, his word was law. If there had been letters for her—and there must at least have been letters of condolence after her parents’ deaths—she had never received them.

But at the moment, Uncle Craddock was away from home.

This letter was clearly addressed to her, in what looked to be a man’s writing, and franked with an illegible scrawl. Her fingers caressed the letter, enjoying the smooth texture of the expensive paper. She did not recognize the seal on the back, but it had been too long since she had needed to pay attention to such things.

She stiffened her spine and told herself to stop shillyshallying. She was not some faint-hearted ninny. Her father would have laughed and reminded her never to hesitate before taking a fence. With a quick smile for the memory, she opened the letter so she could read it before Aunt Craddock and Cousin Corinne arrived at the breakfast table.

The signature first. It was from the Earl of Greystone, her godfather. That was a surprise. Was he no longer in India? Since she had never heard from him, she was not even certain that he knew of her father’s death.

She read the letter through quickly, and then again slowly. There were more surprises. It was clear from the letter that not only was he in England but he had been back for some time—and he had written before. Her fingers clenched around the paper. Here was proof positive that her uncle stole her mail.

The sounds of her aunt’s approach recalled her to the moment. She pulled herself together and by the time her aunt arrived, she was once again a subdued creature in a mousey grey gown, eyes down in seeming modesty to keep her thoughts safely hidden. Fearing that if she looked up for a moment the blaze of hope in her eyes would be obvious, she stared down at the grey bombazine of her dress. Once I am free, I will never wear grey again.

“Still sitting?” Aunt Craddock said crossly. “Don’t you have tasks to attend to?” Her round face had been designed to smile but too often wore an angry, disappointed look.

“I was waiting to speak with you, Aunt. I have received an invitation to spend some time with the Earl of Greystone, and I wondered…”

“The Earl of Greystone? Don’t be foolish. What would an earl want with you?” Aunt Craddock seated herself and waved a hand at the footman who had followed her in, indicating that she wished to be served.

James, the footman, made his face impassive and piled eggs and a roll on a plate without any inquiry as to what Aunt Craddock would like. The eggs, he had to know, were cold by now, and he selected one of the rolls left from the day before. The fresh ones, which had been brought up earlier for Anne, had been returned to the kitchen for the servants’ meal.

The footman looked at her innocently.

“I believe my aunt will need a fresh pot of tea,” she said.

“Yes, my lady.” He bowed and disappeared through the servants’ door.

It was unlikely, Anne thought, that fresh tea would appear in time for this meal. Perhaps this afternoon. But then, did she really care if her aunt had only cold tea to drink?

Anne shook her head. She had more pressing concerns at the moment than the temperature of the tea. It was time to return to the question of the earl.

“He is an old friend of my parents, if you recall, and my godfather,” Anne said smoothly. “He invites me to spend some time at his country house.”

Anne carefully did not mention how much time, or her hope—faint but undeniable—that the remove might be permanent. Greystone was her other guardian, after all. It was only the fact that he had been in India when her parents died that had landed her in the Craddock household.

“I could not, of course, go alone, but I didn’t know if you would find it convenient to join me. You would need to bring Corinne as well. Do you think my cousin is ready to take part in a house party of this sort? There will probably be titled ladies and gentlemen present. Do you think she might feel uncomfortable?” Anne lifted her eyes to look at her aunt innocently.

Aunt Craddock grew positively apoplectic at the suggestion that her cherished chick might find any company, no matter how high, intimidating. “Corinne could not be considered inferior to any friend of your parents! Her beauty and poise are unequaled—she will grace any society she enters and be able to marry anyone she chooses, even a duke!”

“The earl doesn’t say anything about dukes.” Anne took a sip of tea—it was indeed cold—and looked down again to avoid her aunt’s eye.

“Don’t be pert,” snapped Aunt Craddock. “It is not at all becoming. A gathering like this will be excellent exposure for her, and will doubtless lead to invitations to all the important affairs next season.”

Anne managed to keep her expression bland. Aunt Craddock was still smarting over the fact that Corinne’s first season had been met with total indifference. They had attended public balls and entertainments, but no invitations to the fashionable events of the ton had been forthcoming. Aunt Craddock wanted desperately for Corinne to marry a title, and Uncle Craddock’s contempt for the aristocracy was his wife’s despair.

Here it was September, the season well over, and they were still in town. Everyone of importance had long since departed for the country but even though the Craddocks were living in Mount Street, in the elegant town house that had once belonged to Anne’s father, the Earl of Elsworth, they had been invited nowhere.

Corinne had been drifting into the breakfast room and stopped in the middle of a yawn. “Invitations? We have received invitations? To what?” she demanded, reaching out a hand for whatever was available.

Aunt Craddock stopped looking irate and smiled indulgently at her daughter. Anne had to admit that Corinne was an angelic-looking creature, with golden curls and blue eyes that usually managed to seem innocent, at least in company. This morning she was a vision in lace and ruffles, which made Anne even more aware of her own drab bombazine.

“Actually, I am the one who has received the invitation,” Anne said. She was unable to keep a touch of frost from her voice. That worried her. The thought that she might, even if only for a while, escape the control of her aunt and uncle was making her careless. Speaking more carefully, she continued, “A friend of my parents, the Earl of Greystone, has invited me to visit at Greystone Manor in Hampshire. I am sure you and your mother will be welcome as well.” Just as well, she thought, to make clear that they could not go without her.

“Greystone Manor?” Corinne frowned slightly, her blue eyes looking vaguely puzzled. The she burst out, “Greystone Manor! But I have heard of it! It was in all the gossip sheets. The earl came back from India a positive Nabob, and it is all restored and refurbished. It is supposed to be quite fabulously elegant. Oh, this is too, too marvelous.” She spun around in delight. “Just the sort of place I have always wanted to be.”

“It will be a perfect setting for you,” agreed her mother, and then turned to Anne. “When does he expect us? Oh dear. Since Mr. Craddock has the traveling coach, we will have to hire a coach.” Aunt Craddock looked distressed at the prospect of arriving in a hired equipage.

“The earl writes that he will send his coach for me”—how Anne savored that me—“when I let him know how soon I will be ready. What day would you choose, Aunt?”

“Oh…how very gracious of him. I think we should be ready by Wednesday next. That will give us a chance to visit the modiste. I will let him know.”

Aunt Craddock reached out a hand for the invitation, but Anne held it back. “I think, Aunt, that I must be the one to accept his invitation. It was, after all, sent to me.”

Aunt Craddock flushed and then sniffed. “I only hope you can manage to compose a response without giving offense. You are too inclined to forget your position. Come, Corinne, we need to go over your wardrobe and see if it needs replenishing.”

It was not an easy letter, she soon realized. The earl’s invitation sounded as if it was not the first he had issued, but she might be mistaken. Just how many letters had her uncle kept from her? She had to consider it possible that he was telling the truth when he told her that her parents’ friends had forgotten her, that she was of no interest to them now that she was poor. But what of the letters she had written? Had they ever reached their destinations?

Whatever she wrote now, she did not wish to sound as if she was reproaching the earl and his sister for neglect, but neither did she wish to have them think she had neglected them. Nor did she want to complain that her uncle had been interfering with her correspondence. She would sound like a whining child, and that would be too humiliating.

Her parents had expected her to face life with courage and honor. They would not have wanted to see her complain or indulge in self-pity. They would want her to hold up her head proudly.

She needed to remember that she was the daughter of the Earl and Countess of Elsworth. She was Lady Anne Milhaven.