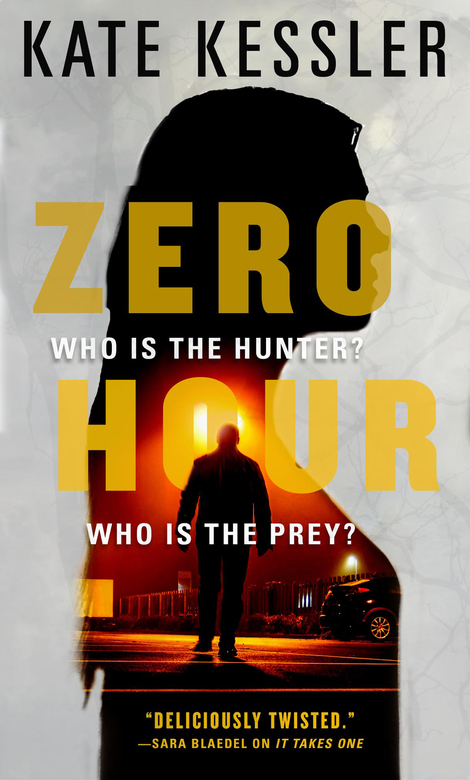 A novella featuring criminal psychologist Audrey Harte. As a teenager, she went to jail for murder. Now, the son of a serial killer has been arrested, but he'll only speak with Audrey . . . and he's asking about her past. Johnny Lee Aday is the most ruthless serial killer criminal psychologist Audrey Harte has ever encountered. When Johnny's son -- and suspected accomplice -- is arrested, police hope they have leverage over Johnny to get him to release his latest victim. Instead, they find themselves up against a mind almost as warped as his father's. Neal Aday will give up his father's location on one condition: Audrey tell him every gruesome detail of her own dark past. If he doesn't contact his father within the next few hours, a young woman will die, and her murderer will escape. All Audrey has to do is finally reveal what happened that night -- and how it felt to make her first kill.

Gerri Rousseau was a cautious young woman. She went out as part of a group and never left her drink unattended. She had several locks on her apartment door, and she carried bear spray in her purse. She didn’t meet guys online, and she didn’t invite them over until they’d known each other awhile. She tried not to form habits that involved the time she left the house or came home. Many of her friends made fun of her for these behaviors, but Gerri had looked into the eyes of a predator before, and she did not want to do it again. Let her friends make fun—she’d take it.

She was on her way home from work Tuesday night when she stopped by a Chinese place near her apartment to pick up the take-out order she’d called in earlier. She bought enough food to last a few days so she didn’t have to cook. It was cold, even for winter in Maine, and she looked forward to the hot and sour soup.

“You’re too pretty to eat alone so much,” Mrs. Chang told her as she paid.

Gerri smiled. “You say that every time I come here.”

The older woman was undaunted. “I mean it.”

The smile lingered. “Thanks. See you next time.” She walked outside, pressing the unlock button on her key fob. The headlights of her SUV flashed, illuminating the gently falling snow. Maybe she’d go skiing on the weekend. Meet a guy on the slopes so Mrs. Chang would give it up.

She opened the back door and put the bag of food on the floor. Then opened her own door.

She turned with a smile. It melted the second she recognized the man standing in front of her.

“You.” She jumped into the car and tried to close the door, but he put his body in the way. Heart pounding, she scrambled across the console, trying to get to the passenger door. He grabbed her by the legs and pulled her toward him. She screamed. He punched her in the back of the head. Her face bounced off the gearshift, making her mind spin even harder.

Please, Mrs. Chang, call the police. She could only hope the woman could see the dark parking lot from where she sat at the cash register.

A pinch in her neck and a few seconds later, Gerri’s knees turned to jelly. He’d injected her with something—just like he’d done all those other girls. Bastard. She’d escaped him once—never thought he’d have the balls to come for her again.

His blurry face appeared before hers. “Oh, Gerri. You knew this day was inevitable.” He smiled and stroked her hair. She whimpered.

And then everything went black.

Detective Neve Graham was having a shitty day. First, someone had pulled out in front of her that morning, causing her to slam on the brakes and spill coffee on her cream-colored sweater. She’d been so mad she put on the siren and lights and pulled them over.

The stain lingered, even though she had taken one of those wipes to it as soon as she got back into her car. Fortunately, she had a spare blouse in the car, so she changed into that as soon as she got to work. Twenty minutes later she dropped a particularly cherry chunk of cherry-cheese Danish on it. She looked like she’d been stabbed. She went shopping at lunch and picked up a couple of new shirts. On her way back, she was rear-ended by a teenager at a stoplight. The kid looked terrified as soon as he realized who he’d hit. He’d been texting with his girlfriend when the front of his truck rammed into the back bumper of Neve’s state-issued sedan.

“You have got to be kidding me,” she muttered as she got out of the car. Now, this was a mess, because minors were prohibited from using handheld devices while operating a vehicle. The kid started wailing about having to start his probationary period over again—didn’t even blink at the fine. Neve was tempted to slap him upside the head. But a black cop—the area’s only black cop—hitting a white boy would cause too much of a commotion.

She’d just gotten back into her car when she got the call—Neal Aday had been spotted at the Hungry Bear, a local restaurant. Neve’s heart stomped hard against her ribs. Neal Aday? The son and supposed partner of his father, serial killer Johnny Lee Aday?

She told dispatch she was on it and requested backup. Then she got her ass over to the Hungry Bear ASAP. She left the siren off so Aday didn’t spook.

When she walked into the establishment, Aday was sitting at a table against the far wall, his back to the door. There was something in the stillness of his posture that gave Neve pause. He was expecting her—someone.

Neal Aday was a good-looking man if you liked pretty white boys, which Neve sometimes did. With his dark hair, clear blue eyes, and chiseled jaw, he could be a movie star. Instead, he’d spent most of his life being dragged up and down the East Coast by his murderous father, who had a thing for brunette, college-aged girls who worked in clothing stores. Very specific.

She slid into the booth and faced him. He met her gaze easily. “I ordered you a coffee,” he said. “I hope it’s still hot.”

“Do we know each other?” she asked.

“No, but I assume you’re law enforcement.” He gave her a disinterested once-over. “Not quite FBI, but you’d like to be, wouldn’t you? State police, then. Was it difficult for you, as a black woman, to rise through the ranks? I can’t imagine these lumberjacks would welcome you with open arms.”

“It was hard at times,” she allowed. She refused to admit that his FBI remark had struck a nerve. “Where’s your father, Mr. Aday?”

He laughed, humorlessly. “Ah, yes. Everyone wants to know about Father. I’m not sure where he is, Detective. He left me here two hours ago, and I haven’t heard from him since.”

“Did the two of you have a fight?” she asked, toying with the mug in front of her. The coffee in it was about as warm as tap water now.

“You could say that.” What appeared to be genuine anguish contorted his perfect features. “We had a disagreement concerning his expectations of me.”

“Do you mind if I ask what those expectations were?”

“The expectation that I follow in his footsteps.” The look he gave her left no question as to what he mea. . .