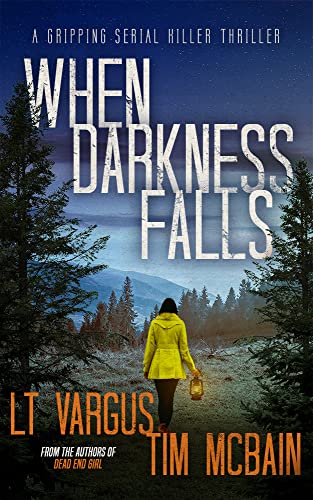 Her body seems to hover above the forest floor. Arms and legs torn away from the trunk. A bloody stump mounted upright on a skewer.

Not just a corpse. A warning.

The most recent body was discovered in the woods just beyond a logging cabin. Dismembered. Put on display. Ghostly pale skin stark against the forest's green.

Before that, two campers were found a few miles off. Cut apart. Impaled. Left in public places where they'd surely be found.

Here, in the primordial wilderness, she'll face off with a shadowy killer unlike anything she's seen. Raging. Brutal. Elusive.

He waits. Seethes. In the woods. In the dark. Always watching. He waits.

Darger digs into the history of torso killers to try to understand the psychology behind the crimes. Finds a legacy of savagery dating back over a hundred years.

Aggression beyond comprehension. A recurring phenomenon of human behavior that chills her.

Human anatomy used to mark out territory. Corpses made totems to warn off others. It happens over and over again.

Who could carry out such brutality? And why?

Understanding the interior world, the motivations, of this type of killer will be the key to solving the case.

The dark woods hold his secrets tightly. The terrain itself shielding him, giving him an edge over those in law enforcement seeking him.

When a storm moves in, Darger finds herself in peril deep in his territory. Vulnerable. Exposed. Walking right into his trap.

The novels in the Violet Darger series can be read as stand-alones. Scroll up and grab When Darkness Falls now.

Praise for the Violet Darger series:

"Excellent suspense right to the last word. Had the most heart pounding ending of any book I've ever read." -- Anne Bembeck, Goodreads Review

"The description had my stomach dropping and clenching as if I was in the car with them! Visceral experience! Just terrific." -- B.J. Hyman, Goodreads Review

"McBain and Vargus have proven yet again that this is their genre, and Loshak and Darger are their stars." -- Jennifer Tooker, Goodreads Review

"Wow, just wow! If you like scare-you-half-to-death mystery books this is the one for you. It starts with a bang and just doesn't stop." -- Ada Lavin

"If you liked Silence of the Lambs, you'll love Dead End Girl... At the same time, there's so much attention to detail and organic storytelling that this could easily compete with any of Stephen King's longer works. I found myself completely invested in every character, from the authorities to the killer to the victims themselves." -- eden Hudson

"This book reminds me of some of my favorite books in the crime thriller genre - Dark Places by Gillian Flynn, The Collector by John Fowles, the Mr. Mercedes trilogy by Stephen King, and of course Silence of the Lambs. It's not a glimpse...it's a good long look inside the mind of a killer. It's fast paced, it's scary, and it's satisfying." -- Rain
Read more

His eyes bloom in the darkness. Wet stones peering out of his skull.
He waits.
And he watches the cabin through a patchwork of greenery. Leaves bobbing in the breeze in the foreground.
He stands just inside the cover of the woods. Creeper wrapped around his feet. Boughs nestled about his shoulders.
Still and quiet, he waits. Grits his teeth. His hand flexes on the grip of his weapon. Ready.
The cold surrounds him. Envelops him. An ever deeper chill coiling everywhere as the night grows more and more frigid.
But heat radiates from his chest, from his arms. Rolls off the top of his head like steam.
The cold can’t touch him. Never could. Never will.
Muffled music booms inside the logging cabin. Song after song leaking past. Sounding muddy through the walls, through the wooden siding. Each track cutting or fading out, the stereo taking a breath before it switches to the next. Counting down the minutes.
Through it all, he waits.
Waits.
Eyes and ears sharp. Focus never drifting.
At last the door swings open. A slice of the cabin’s interior is laid bare.
He hears the tinny sound of the music funneling through the open doorway. And then it cuts back to that deadened hum as the door closes.
Two figures drift through the pool of yellow light on the porch. Morph into silhouettes as they pass under the bulb.
His field of vision seems to zoom in on them. Pushing through the strands of plumage dangling from the branches around him.
They stumble down the steps. Start across the lot. Feet stabbing the gravel with sharp crunches.
One of them walks funny. Wobbling. Drunk.
And they’re loud. Practically yelling about tequila and pissing and wide berths.
When they near the edge of the woods, just a few feet shy of his position, he crouches. Allows the foliage to cover him up to the shoulders.
So close now. So close.
He waits.

Haywood had just zipped up when he heard it.
A high-pitched whimper emitted from Ellinger’s area. Sounded like a kitten or puppy or something, but he knew it wasn’t. Knew it by the way the goosebumps rippled over his skin, all the follicles drawing taut in a wave that traveled over his body.
He wheeled his head around. Stared into that dark section of the woods. Didn’t see much more than the outlines of the tree trunks jutting up out of the dirt, even the branches and leaves somehow impossible to discern in the charcoal smears there.
“Ellinger?”
His voice came out smaller than he liked. Made him feel dumb. Preemptively embarrassed.
He thought about all the times in life he’d been a little spooked, frozen like a rabbit in the quiet, in the dark, and it had always turned out to be nothing.
This time would be the same. Exactly the same. It had to.
Probably tripped. Fell down or got tangled up in some deadfall and snapped his ankle.
He could picture Ellinger. The dark blue baseball cap on his head. The slumped posture. The glazed-over look in his eyes.
Jesus. First, this asshole thinks I want to watch him take a piss. Now he goes and pulls this shit.
This time his voice came out confident, solid.
“Ellinger. Whatsamatter, buddy? You end up needing to drop a deuce or what? ’Cause I can go get toilet paper. Not a problem.”
He took a few choppy steps that way. And the fear returned quickly. Crept up his spine again like a cold spider.
He slowed. Took more care with his stride. Quieter.
He reached the area where he was pretty sure Ellinger had been, but he couldn’t see anything. He scanned the darkness. Tense. Quiet. If the drunken idiot was there, either standing or sprawled in the weeds, Haywood could detect no trace of him.
His fingers fished into his jacket pocket. Pried out his lighter. Flicked it.
The tiny flame beat back a small sphere of darkness. He lifted it. Swept his arm around. Wielded his minuscule torch to and fro.
The orange light glinted on the undergrowth. Leaves and fronds and stems and stalks. Their shadows twitching around them as the glow moved.
The flame guttered out, and the darkness swelled again. Stronger than before.
He swore under his breath and relit the Zippo. An orange peak jumping from the lighter’s mouth.
There.
A glistening spot on a birch trunk. Dark and wet. Ellinger had been here alright.
But he wasn’t now.
Haywood instinctively took a step back. Licked his lips and felt the frigid air assail the wet flesh right away. Violently cold the way only an Alaskan night could be.
He wanted to call out again. Wanted to yell for Ellinger, for anyone.
But his throat wouldn’t budge. The valve at the back of his mouth clamped tight.
He turned around. Ready to scoot back to the cabin.
A dark spot on the ground caught the corner of his eye. He wrenched his head down. Stared.
Ellinger’s hat lay at his feet. The dome of the ball cap crushed flat into the dirt where someone had stepped on it.

At the first gray of predawn light, Haywood bustled out the cabin door. Most of the other lumberjacks fell in behind him, some thirty-two total pounding down the wooden steps.
The search began. Many men and a handful of women splaying into the woods. A disorganized manhunt.
Haywood beat his way through the thicket. Swinging arms. Kicking legs. The brush swishing out of his way in little green explosions.
After looking around the best he could in the black of night, he’d huddled with the others in the cabin for the last two hours of darkness. No one had slept. On edge. Unsure how to proceed.
Ellinger was still out there in the woods. Somewhere.
Maybe he’d passed out in the weeds. Sleeping off his drunk, facedown in a sprawling bed of creeper or some such. That seemed the most likely explanation, the only thing that had kept them from calling the cops.
But Haywood’s gut told him otherwise, especially now that he was out here, stomping through the roughage.
Something had gone wrong. It was no dark flicker of his imagination this time, no mistaking mere shadows for monsters. This was real darkness, real life.
And even before the final revelation came, a bereft feeling settled over his being. A heaviness in the belly. A floating feeling inside his head. His mind, his being, disconnected from his body. Disconnected from the others.
All alone in a dark, dark wood.
The gloom under the canopy still clung to the last of the night, the shadows deeper here. Weak light trickled through the translucent leaves. Made the green wedges look like they were glowing above — organic Christmas lights.
He stepped through a tightly knitted stand of firs into an open place, the land clear and flat here. And then his feet stopped beneath him.
It was there.
The bloody stump hovered in the distance. Skewered on a pole. Dead center in the open area as though put on display.
Impaled.
All naked flesh. A milk-white sheet of skin. Bled pale.
The arms, legs, and head had been removed. Leaving the bare torso there on the stick.
Yawing wounds where the limbs and skull used to be. Something ragged in the way the pieces had come off. Tattered meat.
Haywood’s middle flexed and then went still. Whole body gone rigid. Upright. Frozen.
He could only stand and stare. Breathless. In awe.
He didn’t blink. Didn’t move.
Footsteps crunched toward him. Sets of shoulders soon occupying both sides of him.
Then more footfalls. And more again. A bunch of the others clustering there to behold the image.
Ellinger’s limbless and headless body. A man reduced to a wounded block suspended upright. A trunk on a stick.
What was left of his anatomy had been crafted into a spectacle here, some kind of brutal showmanship at play. Astonishing. Audacious. Striking and profane.
None of them could look away.
No words were spoken. A few gasps, and then quiet.
They held still and gaped. Shocked and hollow. Some awful kind of wonder shuddering through the ranks.
Haywood could feel it like a cold ripple in the air.
That wave of silent revulsion touching all of them.