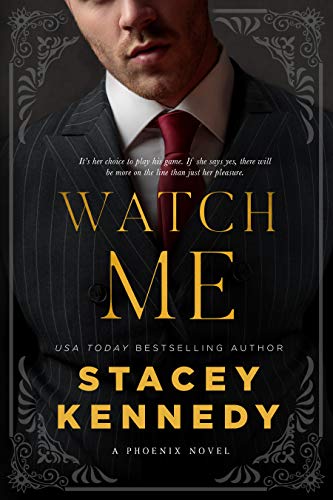 Book 1: Phoenix
Stacey Kennedy
Follow
It's her choice to play his game. If she says yes, there will be more on the line than just her pleasure.
Genres: Billionaires RomanceNew Adult Romance
Buy now
Available in:
Share

In the Phoenix club, there is only one rule; watch, don't touch, until the powerful owner falls for his new star in this deliciously intriguing romance from USA Today bestselling author Stacey Kennedy.

It's her choice to play his game. If she says yes, there will be more on the line than just her pleasure.

Zoey Parker has a three-step plan for revenge. First, gain entrance to the ultra-exclusive, upscale sex club, Phoenix. Second, act out her wildest fantasy in front of powerful old rivals, proving that they didn't break her. Third, disappear and never return. The only kink in her plan? Rhys Harrington, the owner of Phoenix and the one man she needs to stay away from...

Rhys' high-end clients pay extravagant amounts to watch his stars indulge their desires. Rhys' only rule? Watch, don't touch. But one look at Zoey and Rhys decides to participate in the show himself. And when an undeniable passion ignites between them, Rhys knows he wants more. Except Zoey is determined to run... and he is determined to find out why.

When Rhys discovers Zoey's secret, he shocks her by offering his protection... and a no-strings-attached relationship. But Zoey knows there will be more on the line than just her pleasure. Because Rhys' sizzling touch doesn't only capture her body, it also commands her heart.