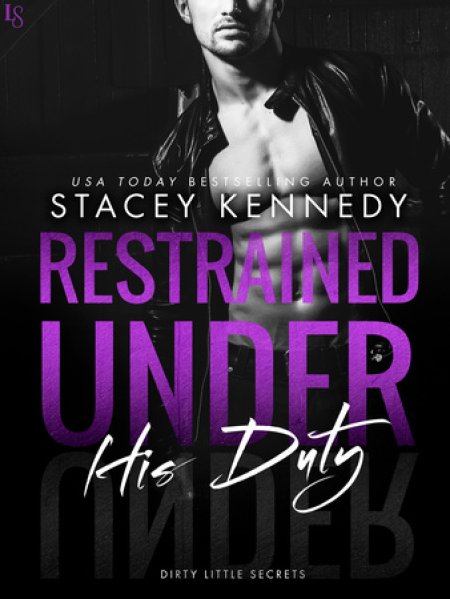 An uninhibited politician’s daughter falls for her loyal bodyguard behind closed doors in this scandalous novel from the USA Today bestselling author of Bound Beneath His Pain and Tied to His Betrayal.

As the chief of security for a prominent senator, Ryder Blackwood is stunned when an anonymous source sends him a compromising photo of his boss’s twenty-five-year-old daughter getting down and dirty in an underground sex club. If it gets out, the media firestorm could ruin her father. More troubling for Ryder is how arousing he finds the whole situation. He’s known Hadley Winters since she was a kid. And now she’s the woman in all his most private fantasies.

Wild behavior helps Hadley get through those painful, lonely nights, but she’s been waiting a long time for a man like Ryder to protect her from herself. Ryder is raw. He’s real. And he makes her feel safe. Now that they’ve both become pawns in a blackmailer’s dangerous game, there’s more at stake than her father’s political career. As the intimate threats tear apart a tender new love, Hadley is forced to trust Ryder with her life—and her heart.

The duet of naughty novellas: BOUGHT BY THE BOSS

The Dirty Little Secrets series: BOUND BENEATH HIS PAIN | TIED TO HIS BETRAYAL | RESTRAINED UNDER HIS DUTY | CUFFED BY HIS CHARM

Praise for Restrained Under His Duty

“With explosive chemistry and a hero to swoon for, Restrained Under His Duty is a perfectly kinky romance to get lost in!”—New York Times bestselling author Skye Warren

“Their first encounter will leave you breathless. . . . I re-read it a couple of times! Looking forward to reading the fourth book, Cuffed by His Charm.”—Books & Boys Book Blog

“I thoroughly enjoyed this book. . . . The pacing of this story is fast and exciting, making it hard to put this book down till the very end.”—Alpha Book Club

“Stacey Kennedy stories are always well written and she as a knack for getting you to feel what her characters are feeling. . . . I am dying to read Gabe’s story! Bring it on!”—The Jeep Diva

Restrained Under His Duty is intended for mature audiences. This ebook includes an excerpt from another Loveswept title.

I’m rooted to the shiny marble floor watching Hadley Winters pour herself a glass of wine in the chef’s kitchen of the historic Queen Anne mansion belonging to her father. Her back’s to me, teasing me with how her heart-shaped ass perfectly fills out her blue jeans. Her body with its perfect curves tempts me. Her long legs were made to be around my waist. But the way she teases me is my punishment for a crime I never committed.
What I feel for Hadley is worse than hunger. It’s worse than thirst. It’s even worse than pain. She’s my forbidden fruit that I crave to taste, and yet my duty as chief of security to her father, Senator Gary Winters, makes her inconsumable.

Over her shoulder, the trees of Lafayette Park wave in the wind outside the window. San Francisco is sunny and bright this afternoon, but my mood is anything but chipper. I try to avoid Hadley at all costs.

I clear my throat, garnering her attention, and as she turns, her mesmerizing light green eyes catch mine and widen. Warmth and emotion cross her face that’s not unknown to me. The attraction is shared between us, and we both know that. She becomes all I see, as a soft flush creeps over her freckled cheeks and her perfectly sculpted lips curve slightly.

“Blackwood,” she finally addresses me, tucking her pale blond, shoulder-length hair behind her ear.

“Ms. Winters.” I mirror her formal address, fighting against the heat rising in my groin. Totally aware of her now, I step farther into the kitchen and toss the magazine I’m holding onto the counter in front of her. “We need to talk about this.”

She sips her red wine, taking a good look at the cover of the tabloid magazine Gotcha! Silently, she flips a couple pages and begins to read the article: Is Senator Winters’s daughter, Hadley, becoming a handful for head security detail and multimillionaire Ryder Blackwood? Our sources say yes! And they also tell us that the kick-ass bodyguard is madly in love with her. She smirks when she finally lifts her twinkling eyes to mine. “Unless you’re ready to admit that there’s some truth behind this story, then there’s nothing to talk about.”

I ignore where she’s trying to direct the conversation. Something I’ve become an expert at doing.

To keep the conversation on point, I, wishing this wasn’t the case, tell her, “The tabloids have taken a sudden interest in my life. Sadly, that means both you and your father are likely to come up on the radar because I work for the senator.”

Hadley laughs softly and leans against the countertop behind her. “Really, Blackwood, let’s be honest here. You don’t exactly work for my father. You’re loyal to him. There’s a huge difference there.”

Two things come to mind. First, she’s not wrong—the senator stopped paying me for my intel and protection a long time ago. After my service with the Army Rangers, her father had hired me as his chief of security due to his close relationship with my dad, and he gave me the money to get my security company up and running. Now Blackwood Security is one of the top private security detail companies in North America. I have operatives working all over the world for top government officials, diplomats, and celebrities. While I have paid back the loan financially, the personal debt for where he’d gotten me in my career so quickly has yet to be repaid.

Second, she’s trying to downplay my importance to him to knock down the first boundary between us. “Listen, there are things I know about you,” I explain gently, staring into her pretty eyes that hold the power to bring me to my knees if I let them. “Things that, because of the tabloids’ sudden focus on me, could be a problem for you.”
Her brows slowly begin to furrow. “What things?”

I snatch the eight-by-ten photograph I’d placed in the back of the magazine earlier and offer it to her. “This, for one.”

She visibly gulps at the photograph of herself, bound, gagged, and getting screwed in Afterglow, a local sex club. “This happened months ago. How did you . . . ” It’s blatantly clear that she’s never seen the picture before now, and I admit that I’m a bit surprised when her head snaps up, eyes narrowing. “To be perfectly honest, Blackwood, this is none of your business.”

“Believe me, I’m well aware.” Not willing to argue that point with her, I take the photograph from her and return it to the back of the magazine. “But let’s discuss this, shall we? If this picture found its way to me, how long do you think it would take the tabloids to get ahold of it? Your father doesn’t need a scandal like this.”

“I’m well aware,” she cleverly throws my own words back at me.

I fight my grin. I’ve seen middle-aged men cower in my presence. This twenty-five-year-old woman stands before me as an equal, and I totally enjoy it.