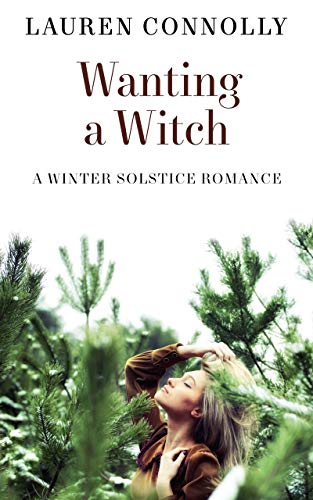 When a vampire moves in with a witch, the holiday gets interesting.
Keta Latimer returned to her hometown with a mission, only to get sidetracked by a gorgeous witch. Unfortunately, Keta's past has taught her that witches and vampires don't mix, so she puts her romantic hopes aside. Still, when the magical woman offers her spare bedroom as a temporary place to crash, Keta finds herself getting cozy with her new roommate and maybe overstaying her welcome.

Roe Fowler never thought the woman she saved six years ago would reappear on her doorstep looking like a golden goddess and offering heartfelt thanks. Roe should have accepted the kind words and waved goodbye. Instead, she invites the vampire into her home. The newcomer's daily presence brings Roe joy, but she senses there are wounds beneath Keta's skin that even her witchy healing powers can't fix.

As the Winter Solstice approaches, the tension between the two paranormal housemates increases. On the longest night of the year, a vampire and a witch will have to confront a painful past and choose whether to let the magic of Yule forge a lasting connection or part when the sun rises.

Wanting a Witch is a holiday book for those who enjoy a little magic and celebrate the Winter Solstice.

Ring the doorbell, you coward.

My words of motivation could do with a positive spin.

Ring the doorbell, you powerful goddess of the night.

I smile to myself and reevaluate the entrance to the townhouse. The front porch light is on, creating a warm pool in the chill of the early morning darkness.

Not that I’m particularly cold. Before getting out of my van, I shrugged on the puffy yellow coat I’d bought from a thrift shop last winter. But more importantly, I fed just a few days ago.

The donor’s blood pulses through my veins with a subtle heat and a tingle of energy, which I pull on now to fuel my courage.

Wooden porch steps creak as I mount them, the sound overly loud in the quiet night. But their chorus is nothing compared to the echoing ring of the doorbell. The chime reverberates through the house, and I pray to the gods that the owner doesn’t go straight to bed after her night shift.

Luckily, my supernatural hearing doesn’t pick up any muttered cursing or threats. There’s just the muffled shuffle of footsteps a moment before the lock turns and the door swings open.

Finally, after years of imagining, I get my first look—a good look, not clouded by pain or drugs—at Roe Fowler.

The woman who saved my life.

“Wow.” The word sneaks out before I consider how strange of a greeting it is.

But my brain struggles to provide anything else.

Because Roe Fowler is wow.

Even wearing wrinkled scrubs that smell like anesthetic and sporting blocky rubber shoes that appear more durable than steel-toed boots, the woman is striking.

Her mostly angular face has lush lips, the bottom one dipping slightly in the middle. An indent perfect for running a tongue along. I lick my own lips at the fantasy and try to formulate a coherent thought.

The task is difficult to accomplish with her staring. Dark eyes beneath sharp brows examine me, slicing through my skin as if any barrier I try to erect between us would give as easily as tissue paper.

The intensity of that thought shocks me out of my lusty disconnect from reality.

I didn’t come to Roanoke to ogle a sexy woman. I have two errands to complete in this city, and neither involves eye-fucking Roe Fowler.

Confusion crinkles the space between her brows, and I lose my breath at how the expression reveals she’s not only beautiful, but also adorable.

This is not a good time to find myself in front of my fantasy woman. I have things to do.

“Do I know you?” Her eyes, the same intriguing blackness as the space between stars in a night sky, skim over me, searching for something familiar.

I try not to let the lack of recognition dishearten me. I’m nothing like I was the day our lives first intertwined.

“Not exactly. But we have met before. Kind of.” For some reason, I never considered exactly what I would say when I came face-to-face with the woman who had rescued me. “Remember the patient you had a few years ago who had been drained by vampires? The one you called your friend Uma about? Well …” I step back and spread my arms, letting her connect the rest of the dots.

As a nurse, Roe has probably had lots of strange cases show up in her emergency room. Maybe I’m not the only victim of a supernatural attack she’s treated, but I know for sure that I’m the only one who was so far gone that she felt the need to call in Uma Latimer’s assistance.

Vampires assaulted me. Then, one saved me.

If there had been any other rescue missions, Uma would have told me.

Until now, Roe has kept one hand on her door, as if ready to slam it shut if I were some kind of threat to her. An understandable worry when a stranger rings your doorbell at five in the morning. But now, her grip loosens, and she moves forward, gaze more intense than before.

I have every ounce of her attention, and the sensation is intoxicating.

The sound of my name from her mouth is more delicious than the blood of a woman drunk on pinot noir.

Maybe she’ll let me record her saying it on my phone. That wouldn’t be a weird request, right?

Stay on topic, I scold myself.

“Keta Latimer, at your service.”

I hold out my hand for her to shake, and after a moment of hesitation, she does.

I wonder if the reluctance arises from surprise or because she wants to avoid touching me.

Her palm is warm and rough where it clasps mine, and I command my grip to loosen after an acceptable amount of handshaking time has passed.

“You took Uma’s last name?” Roe asks with a note of something in her voice I can’t interpret.

“She said I could. And after Uma brought me back to life, I figured she was basically my new mom.” Plus, I wanted to get rid of all the things connecting me to my life before the attack.

Life as a vampire.

“I…” Words fade from my mouth as I absorb what she just said.

After living with Uma for six years, I thought I knew most everything there was to know about the vampire. But I guess everyone has their secrets. “Is that why you called her that night?”

Roe crosses her arms and leans on her doorframe. “No. I called her because you were dying, and human medicine wasn’t going to save you. Neither was my magic. Only a vampire could, and she’s the only vampire I know.”

When I was nineteen and didn’t care about my life, something like luck or fate landed me in the emergency room where Roe Fowler was working. A normal nurse would have had to watch me succumb to my wounds. But this nurse also happens to be a witch. Because of her knowledge of the supernatural world, I’m alive today.

Well, more like undead. But I don’t feel the need to make the distinction.

“Everything you did for me, that’s why I’m here.” Stepping closer, I hold her eyes with mine, hoping she can see the depth of sincerity in my soul when I speak. “Thank you.”

Roe blinks and then tears her stare from mine, glaring at the porch beneath my feet while running an agitated hand through her hair. “I did my job.”

“No.” I want to take her hand again, rub my thumb over the well-earned calluses. “You could have gone the easy route. Kept up your human ruse and let me die. But you risked everything by letting Uma turn me and then sneak me out. And now, I have so much more than I ever thought I would because of you. And I know this is years late—I’m behind on a lot of things—but I needed to tell you in person that you are amazing, and every day, I’m thankful for you.”

Roe swallows, and I watch the muscles move in her throat. Goddess, that is not a good place for me to be staring. The fantasy of my fangs slowly sliding into her flushed skin has my gums aching. My fangs want to descend.

Maybe I should’ve written this all in a note, like Uma suggested. My vampire mother said that Roe didn’t do well with gratitude, but I was insistent that I deliver my thanks in person. Besides, I had to come to Virginia anyway. This trip has two missions. One of thanks and one of forgiveness. The first is easier, which is why I started here.

But now, I don’t want to leave.

Which means I probably should.

Roe still hasn’t said anything, seeming content to just stare at a spot on the ground while I stumble through my awkward thanks.

“You’re leaving?” she asks, as if we had made plans to hang out and I was suddenly canceling at the last minute.

“Yes? I mean, that’s why I came. I was just waiting for you to get home from work, so I could talk to you, and then I thought I’d head out.”

Roe stops avoiding my gaze, the confused wrinkle back between her brows. “Waiting for me?” That’s when she tilts her head, peering over my shoulder. “In that?”

She points across the street, and I know what she’s gesturing toward.

“Yep. I got here around midnight and just hung out. Then, you came home, and I tried to catch you before you went to bed.”

Roe studies me. “You spied on my house all night in a creepy van?”

“Whoa. Pump the brakes.” I plant my fists on my hips and scowl at the witch. “I was not spying. I was waiting. And my van is not creepy.”

Her gaze flicks behind me and then back to my face, unconvinced. “Sure.”

Indignation drowns out some of my infatuation. “It’s not! Okay, maybe the outside isn’t sunshine and rainbows.” In fact, the paint job is a matte black with darkly tinted windows. “But inside, it’s comfy and cozy and the opposite of creepy. There are throw pillows in the back, for goddess’s sake.” I spent months refurbishing my van into a home on wheels in preparation for a cross-country road trip, and not even a woman as devastatingly gorgeous as Roe Fowler is allowed to insult it.

The witch only blinks at me, and I let out a huff.

“Whatever. I didn’t come here to get your approval on my vehicle. I came to say thank you, and that’s done. Have a nice life.”

Just when I’m about to turn and stomp back to my perfectly lovely van, her low voice stops me with a question.