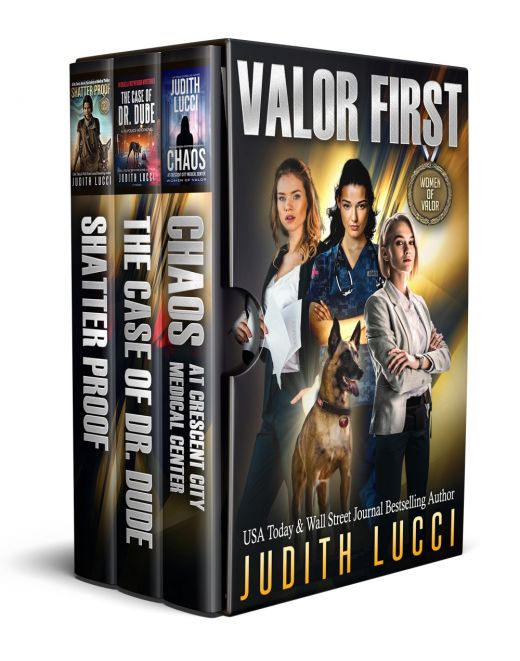 Meet the Women of Valor
Valor is defined as great courage in the face of danger. These three women exhibit just that.ChaosMeet Alexandra Destephano, a nurse attorney in New Orleans who finds more than malpractice and negligence at Crescent City Medical Center.The Case of Dr. DudeRetired homicide detective Michaela McPherson and canine companion Angel find retirement impossible when evil, murder and crime knock at their door.Shatter ProofBattlefield surgeon and CIA undercover operative, Sonia Amon and beloved war dog, Tessa, display great courage in the face of catastrophic danger as she fights terrorists, one of them her own father, every single day.In the world of evil, indecision, and death these Women of Valor use their strength of mind and spirit to embrace the true mark of bravery.

Read their stories...You won’t be disappointed.

“The world will not be destroyed by those who do evil, but by those who watch them without doing anything. - Albert Einstein

The Voodoo Queen faced the river as she stood at the edge of Congo Square. The weather was typical of the Big Easy in February. It was chilly, soggy, and biting cold. The High Priestess pulled her warm dark cloak around her as a heavy mist engulfed her and shrouded her from peering eyes.
But sometimes you just can’t hide. The evil spirits still saw her. She couldn’t hide from them. She heard them whispering in the wind. Their sound was like the rustling of leaves and the eerie sound of moans and lightly-tapped staccato drums. Every now and then she heard the good spirits respond. Their sound was like a fine violin and the tingling outrage of a triangle. The queen turned back to her worship service. She had called her people together to worship and summon the good spirits. The Voodoo worshipers were committed, focused, and intent. This gathering had purpose. It was not a Voodoo activity to entertain thousands of curious tourists who thronged the French Quarter the week before Mardi Gras. It was a gathering to call upon every Hougan and Mambo she could. She needed every good spirit available. Queen Miriam needed help. She needed every decent priest and priestess in good standing to appeal to the Iwa on her behalf. The Iwa were spirits that made things happen — good things and bad things. She needed the help of the good spirits.
The Queen watched the dancers as they gyrated, swayed, and whirled in the firelight. The women were barefoot, the men shirtless, their bare chests glistened in the firelight. The singing was loud, accompanied by chanting, clapping, and foot-stomping. Tonight she’d allowed drummers to attend the gathering. She needed the drummers to gain the Iwa’s attention. The drummers beat their long instruments so quickly the drumsticks blurred before her eyes as did the women dressed in flowing white dresses with brightly colored headpieces.
Queen Miriam Charbonnet, the High Priestess needed help. She needed every bit of power, control, and influence she could amass — every attribute, every resource, and every spirit she could summon. The work ahead was too much for her alone.  She needed the Mambos, the Laos, and every Witch Doctor and good spirit she could gather. Bad times were ahead. Evil times. Days of destruction faced them in their New Orleans’ homes.
The sounds of the worshippers reverberated in her ears and deafened her. She lost focus as the drumming and dancing became frenetic. For a moment she was transported to another place where she saw only evil. The Iwa are letting me know my job will be long and hard and my enemies great. Miriam lifted her eyes in gratitude. She knew she had a rough time ahead.
The piercing cold penetrated as she returned to Congo Square. A great fire burned behind the dancers and illuminated them. The q body felt scorched, her skin hot. She remained still until the dancers faded from her vision, and the drumming ended. She was left alone by the fire. High Priestess and Voodoo Queen Miriam Charbonnet prepared for battle. She was the queen, a decedent of generations of Haitian and New World Voodoo Queens. I can do this.
Seconds later a stray cloud covered the moon. It was pitch black. The fire was gone and so were the worshipers. A bitter stillness settled in the icy air. Miriam heard whispers all around her. The spirits were battling each other.
She dropped and sat cross-legged on the cold ground and looked at her weapons of war, the numerous gris-gris she'd amassed. The queen had hand-fashioned them from herbs, powders, feathers, fabric, and bits of nature. Slivers of glass and bits of earth completed her collection. Her amulets were magic. They were gris-gris, and potions were guaranteed to provide healing, protection, and strength — or cause pain, death, and disease. Her magic was strong and powerful. Power that could inflict hurt and destroy enemies at a simple command. Power that could dissolve deception, hurl curses, cast spells, and ruin lives. She would need this power soon. She would need tremendous power.
There was trouble coming. Bad trouble. Evil and malevolent predictions so strong she wasn't sure she or her people could fight them. Danger and deception that could destroy lives of many fine people in New Orleans. People who were her friends. People who had helped her people in years past. People she loved and cared for.
Queen Miriam Charbonnet never forgot those who cared for her. She looked in the distance for the Mambos and Hougans. She prayed they would come. She needed the spirits. She paused and felt for them, listened for their whispers. The queen was wise and commanded the respect of the Voodoo — the good Voodoo that is. Miriam was the only one who could stop the curses and hexes cast by the dark spirits and evil ones.
She couldn’t do it alone. Once again, she turned her ear to the wind to listen for the whispers of the Iwa. There was no sound.
Fear pounded her body and then passed through her heart.
She didn’t know if she would make it.