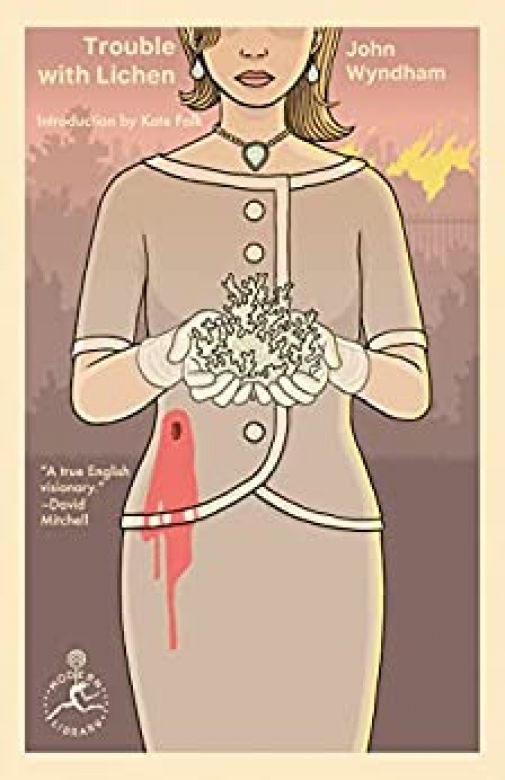 A “sharp, amusing story” (The Guardian) about the fountain of youth and its implications for women’s rights, by one of the twentieth century’s most brilliant—and neglected—science fiction and horror writers, whom Stephen King called “the best writer of science fiction that England has ever produced.”

“It was a genius move for John Wyndham to center an age-slowing narrative on women, who are still today pressured to remain youthful-looking forever, or succumb to social invisibility. . . . Wyndham was uniquely gifted at skewering humankind’s foibles while maintaining a shred of hope that our better angels would prevail.”—Kate Folk, from the introduction

What if humans discovered the secret to prolonged life?

Francis Saxover and Diana Brackley, two biochemists investigating a rare lichen, separately discover that it has a remarkable property: It slows the aging process almost to a halt. Francis, realizing the horrifying implications of an ever-youthful wealthy elite, decides to keep his findings a secret. But the younger and more daring Diana sees an opportunity to overturn the male status quo and free women from the career-versus-children binary—in short, a chance to remake the world. 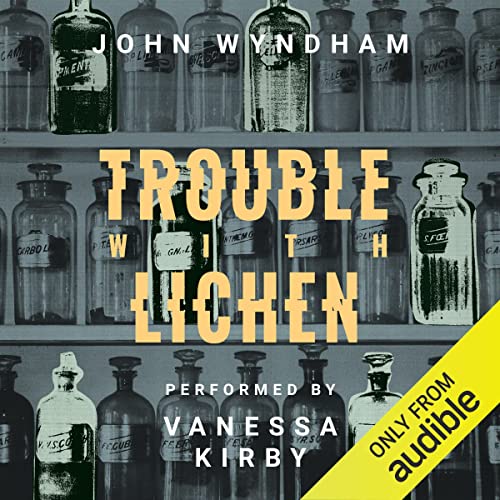 The floor of the hall had been cleared. Someone had put rather somber bunches of evergreens here and there on the walls. Somebody else had thought a little tinsel might cheer them up. The tables, set end to end down one side, made a white-clothed counter supporting plates of sandwiches, plates of bright cakes, some dishes of sausage-rolls, jugs of lemon, jugs of orange, vases of flowers, and, intermittently, urns. To the eye, the rest of the room suggested a palette in motion. For the ear, even from a little way off, there was a reminder of starlings at dusk.

Miss Benbow, maths, while listening to a tedious account of the intelligence shown by Aurora Tregg’s puppy, let her gaze wander round the room, noting those she must have a word with in the course of the evening. Up at the far end she saw Diana Brackley, alone for the moment. Diana was certainly one who deserved congratulations, so, seizing a pause in Aurora’s breathless delivery, she commended the puppy’s sagacity, wished it well in the future, and broke away.

Crossing the room she had a sudden glimpse of Diana through a stranger’s eyes: no longer a schoolgirl, but an attractive young woman. Perhaps it was the dress that did it. A simple navy-blue face-cloth, unnoticeable among the rest until you really looked at it. It had been inexpensive—Miss Benbow knew that it must have been—yet there was a quality of style about it, or was there really? She wasn’t quite sure. Diana had taste in clothes, and that something else that can make three guineas look like twenty. A gift, Miss Benbow thought ruefully, not to be despised. And, she went on, still seeing through the new refraction, the looks were a part of the gift. Not pretty. Pretty girls are lovely as the flowers in May, but there are so many flowers in May. No one who knew words could call Diana pretty . . .

Eighteen—just eighteen—Diana was then. Fairly tall—five foot ten, or thereabouts—and slender, and straight. Her hair was a dark chestnut, with a glint of russet lights. The line of her forehead and nose was not truly Grecian, yet it had a classic quality. Her mouth was a little reddened, for one must not go to a party undressed, but, in contrast with the many rosebuds and gashes to be seen all around, she had just the quantity and the color that suited the occasion. The mouth itself had a kind of formally decorative appearance which told one practically nothing—yet it could smile with charm on occasion, and did not do it too often. But at closer range it was her grey eyes one noticed, and was aware of all the time; not only because they were fine eyes, beautifully spaced and set, but even more on account of their steadiness, the unembarrassed calmness with which they took in, and considered. With a kind of surprise, because she was in the habit of thinking of her as a mind rather than as a shape, Miss Benbow realized that Diana had become what in the youth of her parents’ generation would have been termed “a beauty.”

This thought was immediately followed by a pleasant sense of self-congratulation, for in a school like St. Merryn’s High you not only teach and attempt to educate a child; you conduct a kind of jungle warfare on her behalf—and the better-looking the child, the more slender, generally speaking, are her chances of survival, for the partisans of ignorance enfilade your route in greater numbers.

The touts for dead-end jobs slink along beside you, butterflies with wings of iridescent bank-notes flutter just within reach tempting your charge to chase them, the miasma of the picture-papers taints the air, the sticky webs of early marriage are spun close by the track, hen-witted mothers dart suddenly out of the bushes, myopic fathers blunder uncertainly on to the path; rectangular, flickering eyes gleam hypnotically from the shadows, tomtoms beat a restless, moonstruck rhythm, and up above there are the mocking-birds, always crying: “What does it matter as long as she’s happy . . . ? What does it matter . . . ? What does it matter . . . ?”

So you are entitled, surely, to feel some pride of achievement when you regard those whom you have helped to guide past these perils.

But then, in honesty, Miss Benbow had to call herself to order for taking unearned credit. Diana, one must admit, had required little protection. The hazards did not trouble her. The temptations she regarded aloofly, as if it had never crossed her mind that they were intended to tempt her. Hers was something the manner of an intelligent traveler passing through interesting country. Her destination might be unknown as yet, but it was certainly ahead, and that anyone should be satisfied to drop off this early at wayside halts and primitive villages simply puzzled her. No, one was glad Diana had done so well, but one must not take too much credit for it. She had worked hard and deserved her succes—the only thing was that one could have wished—although it did seem a rather dreadful thing to wish when one had to strive so hard with inertly conformist children—but one did wish that she were perhaps a little less, well—individual . . . ?

By this time Miss Benbow was near the end of her room, and Diana had seen her approaching.

“Good evening, Diana. I did so want to congratulate you. It’s splendid, perfectly splendid. Mind you, we all knew you’d do well—we should have been dreadfully disappointed if it had been anything less than well. But this—well, it’s better than I dared to hope for you.”

“Thank you so much, Miss Benbow. But it wasn’t all me. I mean, I wouldn’t have got very far without all of you helping me and telling me what to do, would I?”

“That’s what we’re here for, but we are in debt to you, too, Diana. Even in these days a scholarship brings credit to a school—and yours is one of the best St. Merryn’s has ever gained. I expect you know that.”

“Miss Fortindale did seem really pleased about it.”

“She’s more than pleased, Diana. She’s delighted. We all are.”

“And, of course, your parents must be delighted, too.”

“Yes,” agreed Diana, with a touch of reservation. “Daddy’s very pleased. He likes the idea of Cambridge for me because he’s always wished that he’d been able to go there himself. If I’d failed the scholarship Cambridge would have been out of the question: it would have had to be just—” in the nick of time she remembered that Miss Benbow was a graduate of London, and amended to “—one of the redbricks.”

“Some of the redbricks are doing very good work,” Miss Benbow said, with a faint touch of reproof.

“Oh, yes, of course. It’s only that when you’ve made up your mind to do something—well, having to do something else is a kind of failure, however you look at it, isn’t it?”

Miss Benbow resisted being drawn along that line.

“And your mother? She must be very proud of your success, too.”

Diana looked at her with those gray eyes that seemed to see further back into one’s head than most people’s.

“Yes,” she said, judicially, “that’s how Mummy feels about it.”

“I mean, that she must be very proud of my success,” Diana explained.

“But, surely, she is,” protested Miss Benbow.

“She tries. She’s really been awfully sweet about it,” said Diana. She fixed Miss Benbow with those eyes again. “Why is it that mothers still think it so much more respectable to be bedworthy than brainy?” she inquired. “I mean, you’d expect it to be the other way round.”

Miss Benbow blinked. Something awkward was bound to crop up in conversation with Diana, but she took it straight.

“I think,” she said judicially, “that I would substitute ‘comprehensible’ for ‘respectable.’ After all, the ‘brainy’ world is a mysterious closed book to the majority of mothers so they feel uncertain about it; but they are all, rather naturally, under the impression that they are authorities on the other, so that they can understand, and help.”

“But ‘respectable’ does come into it somehow—though I don’t quite see why,” she said, with a slight frown.

Miss Benbow gave a slight shake of her head.

“Aren’t you mixing up respectability and conformity?” she asked. “It’s natural for parents to want children to conform to a pattern they understand.” She hesitated, and then went on: “Has it ever occurred to you that when the daughter of a domestic-minded woman chooses to have a career she is criticizing her mother by implication? She is saying, in effect: ‘The kind of life that was good enough for you, Mother, isn’t good enough for me.’ Well, mothers—like other people—don’t care for that very much.”