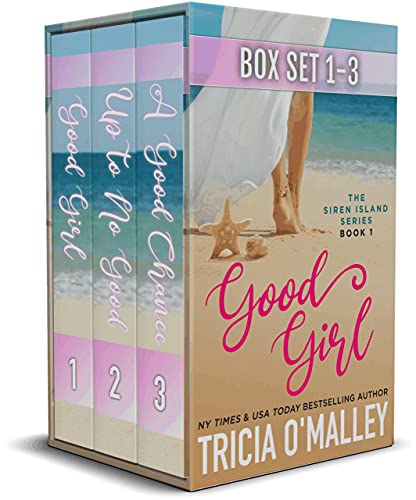 Good Girl - Book 1
When Samantha books a trip to Siren Island, it's because she has finally hit a wall. Worn-out, defeated, and dead tired – Samantha is ready to run away from it all. Her whole life has been spent playing by the rules, and for what? An empty apartment, a career with no upward movement, and one failed relationship after another. When it all blows up in her face, what's a girl to do but take a last-minute trip to the ridiculously named Laughing Mermaid Bed & Breakfast on an unknown speck of an island in the Caribbean?

Lucas is no stranger to burn-out. He landed on Siren Island seeking solace from his own troubled past. What he didn't expect was to find that his mysterious neighbors at the quirky Laughing Mermaid bed & breakfast would show him there's more to this world than he ever could have believed. When Samantha arrives as their guest - depleted and needing respite, Lucas can't help but feel like he could be the man she needs. Irresistibly drawn to her uptight demeanor, Lucas is determined to unwind Samantha and show her that life on Siren Island could be the answer to all her problems.

Up to No Good - Book 2
Lola Ramon has cultivated a life most would dream of – or judge – depending on who is doing the looking. A world traveler and artist, she never stays in one place for too long, or with one man. A fateful meeting with a psychic in Italy reveals the cracks in her happy exterior and sends her to Siren Island determined to take a break from her wandering lifestyle. There, she hopes to finally find answers to a question that's always enchanted her.

Gage Rivelle waved goodbye to the corporate world from the deck of his beautiful new sailboat years ago and has happily settled into a leisurely life leading sailing tours on Siren Island. Used to women of all ages throwing themselves at him, Gage has developed a discerning eye for what he's looking for in a life partner. When Lola steps off the plane, Gage knows instantly he's found the one.

Fiercely independent and determined to explore the mermaid mythology of Siren Island, Lola has promised herself a break from whirlwind relationships. Admittedly attracted to Gage, she pushes him away, wanting to take this time to focus on herself.

In a battle of wills, Gage must prove to Lola that he isn't the island playboy she thinks he is, but instead could be the one man who will stick by her side forever.

A Good Chance - Book 3
Will she be swept away?

If someone had told Avery that she'd be flying to a tiny island in the Caribbean to film a reality show masquerading as her identical twin sister, she would have thought they were crazy. And yet, she finds herself in a tin can of an airplane, about to land on Siren Island where a film crew waits to document her every move for a new reality love show – Swept Away.

What she doesn't expect is for Siren Island to live up to its name, nor to actually find love. When she meets the women of the Laughing Mermaid, Avery's world tilts as everything she's ever thought to be true of herself, and of the world, gets thrown out the window. As her beliefs get tried, the producer, Roman, can't seem to stop baiting her as she does her very best to meet the challenges head-on and tries to form a connection with the bachelor, Beckett.

As her reality gets rocked, Avery scrambles to not let fear dictate her future, and to emerge from the depths a new woman – ready for love and a life of adventure.

If only he will give her a chance.