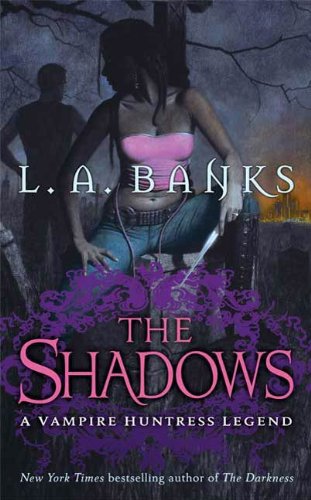 In the newest Vampire Huntress novel from national bestselling author, L. A. Banks, more than vampires are coming out to play. . .

The Dark Realms are taking cover after an angel onslaught from On High. The Anti-Christ has been injured and the fourth Biblical seal has been broken. Yonnie and Val, a strange combination of a daywalker and an angel hybrid, have joined Damali and Carlos's team. And the two new Council Level vamps, Elizabeth Bathory and Lucrezia Borgia, are still in recovery from their last mission.

Seething in the underworld is the Unnamed One, so furious that he's bringing the battle topside, unleashing a full-frontal assault on mankind for the offenses committed by the Vampire Huntress team. This time, Damali and Carlos must address serious human casualties and collateral damage...all while the vampire councilman, Nuit rebuilds Blood Music to become more than a record label, but a media brainwashing empire for the dark lord.

Dead Harpies, messenger demons, and human helpers lay strewn across the granite floor, victims of the Beast's wrath and involuntary black blood donations. The smell of burning, sulfur ridden flesh filled the air and the sound of agonized wails was clotted by the sizzling meat frying against the dank cavern bottom.

Lilith worked feverishly to staunch the dangerous flow of blood that gushed from the heir's side while her husband continued to work triage, summarily calling forth more blood and more bodies for his progeny to consume in order to keep their prized patient hydrated.

Another blast rocked the cavern and a winded Lilith looked up from the task as her patient howled in pain.

"Keep working!" her husband commanded and then looked up. His nostrils flared with blue-black fire and the clatter of his hooves echoed in the chamber as he paced, setting her teeth on edge. "If you lose him due to your ineptitude, you die!"

Lilith cautiously continued to excavate the eerie, glowing white light out of the heir's side. The brilliance of the white light emanating from the Neteru blade bolt was blinding. There was no way to stare at it directly, and even touching inches near it could permanently injure her limbs. What she could never make her husband understand was that if she placed her mouth over it to tear it out with her fangs, both she and their progeny would die and it would have been all for naught.

This was delicate surgery, but in his state of mind, she knew the Dark Lord was beyond logic. He couldn't touch the injury; she couldn't touch the injury. Only a black magic blade could be used to make an incision outside the glowing white ember that was spreading on the heir's skin like a rapid cancer. The light lesion was also imploding, damaging vital organs beneath it, which meant she had to cut wide and deep and quickly. The patient couldn't be anesthetized, for she needed his fury-will to help keep his dark life force going. However, the pain from his injuries compounded with her ministrations was sending him into shock.

Tears of frustration stung her eyes. Part of the chrysalis had been damaged. The heir had been born too soon. He was fully formed on the outside, but his internal demon organs had yet to harden. His exoskeleton had only recently been absorbed and covered with his human masking capacity. Even his fangs were new, hadn't hardened, nor had his wing bones turned to steel-hardness yet. His spaded tail wasn't even retractable at this point, and it flailed about piteously, trying to push her away as the source of his agony.

Their poor baby was still night-blind, his eyes had yet to adapt to complete darkness… and his lungs were not strong enough for the underground sulfur and heat. His heartbeat had yet to die. There was so much that had to be corrected before it had been time. Damn the Neterus!

Vital blood supply veins in the placenta that had been connected to the roof of the birthing cave, which were needed to wash the heir's system clean of the dreaded silver and light toxin that contaminated him, had been severed. Their patient's breathing labored in the subterranean air. He needed fresh, earth-plane oxygen in his fragile, living-species lungs. The chrysalis would have given him that, too.

Ruefully, Lilith looked at their gasping, struggling patient and the partial chrysalis skin that still covered his face. That was the only thing they could quickly improvise while under siege to give him what little air could be siphoned from topside during the onslaught. Beads of black sweat rolled down her face as she leaned over his body. Another blast rocked the cavern, causing stalactites to come crashing down and stalagmites to uproot from the cavern to begin a dangerous subterranean avalanche.

Lilith's and her husband's eyes met as he shielded her and the heir from falling rocks. She was certain that for the first time in history, probably since the initial battle he had fought in Heaven before being cast down, a lack of surety burned in his bottomless black eyes. He turned away from her, the vulnerability shaking them both. She could feel his power being torn between guarding his future and protecting his current empire from the onslaught of warrior angels ransacking his realms.

"Go, fight," she said as calmly as possible. She stared at him and then down at the patient. "If there is nothing for him to inherit, then he is as good as dead to us, anyway."

"Your life for his," her husband said between his teeth in Dananu, beginning to pull away from the table as he smashed another body into the feeding rocks to be sucked dry by the few remaining placenta-attached veins.

"It was going to be that in any regard, so why fear leaving me here to do my very best?" Her gaze narrowed, for once all fear had fled her.

"At this point I trust no one," he said, seething. "As if I ever did. And were it not for your lax security measures they would have never—"

"Hold it," she said, her voice strong and not wavering. Rare truth burned in her mouth like acid and she spit on the smoldering floor, unafraid. "They followed your black energy trail, not mine." When her husband turned away, she pressed on, making the most of the extraordinary moment of having bested the Devil in his own game. "They were able to do that because you underestimated the old priest's power of love." She clucked her tongue, making a tsking sound that caused her husband to whirl on her. "You need me, even if you punish me later for my insolence—so be it. But as the only entity in all of Hell that will tell you the truth, and not just what you want to hear in the midst of a crisis, I implore you to consider me a valuable resource and not waste me in a sudden rage."

When he walked away from her, she knew she had him. Satisfaction spread through her body, filling her with renewed power, even if it was potentially short-lived.

"Can you save him?" he finally asked, his shoulders slumping from fatigue and worry.

"Saving him has always been in my best interest, too, husband, regardless of your opinion of me. However, if you do not prevail then we're all dead, even you. So go, fight, and leave me to my work. Preserve what little is left and seal the breaches. There will be time enough to settle the score if I fail… where on earth shall I run from you, anyway?"

"There will be no shadow dark enough to hide from me if you fail."

"Failure was never my plan. You should know me well enough by now. I always play to win." She lifted her chin and stared at him directly. "I told you, Lu, I was in this with you till the very end."

The patient stopped breathing. The two powerful entities stared at each other. Her husband's fangs lengthened.

"He's gone," the Beast growled, beginning to circle her.

Lilith pointed up at the network of veins clinging to stalactites that were still pulsing. "Listen," she hissed again. "The shelling by the Light has ceased."

"Just as my heir's breaths have ceased!" A section of cavern wall flew at her and she ducked. Undaunted, she leapt up in a rare show of insubordination. "Stop it. You'll kill him!"

Silence settled between them. Poised for a final black-energy extinction strike, her husband watched as she went to the marble slab and checked vital signs.

"They were linked to his dark-energy life pulse." She smiled slowly and closed her eyes, beginning to chuckle. "He's self-aware and finally helping to heal." She glanced up at her husband, who was now towering over her, trying to get a closer look at their patient. "Don't you see… he's flatlined to deceive them."

With a wave of the Beast's hand, four more bodies were impaled on the stalactites.

"Be proud, Lu… he has your cunning and endurance for pain. I must finish my work of cleaning the wound. You must finish your work of sealing the realms and reinforcing all the gray-zone shadows. Let us not be at odds, but be in collusion toward the same goal." She touched his stone like chest, glad that he simply closed his eyes for a moment and steadied his breathing, rather than ripping the limbs from her body. "I will not fail you."

Slowly he reached out and a length of barbed-wire chain filled his hand. He closed his fist around it as the chain yanked away in a scorching whir through his palm. Attached to the end of the twisted metal was a huge manacle that cuffed three baying hound heads that were connected to the same dog's body.

The vicious creature's jowls were filled with acid-dripping fangs, and it scrabbled against the smoldering floor, trying to pull toward the breach in the realms. Thick cords of muscles striated the animal's back legs and barrel chest, its barking now near deafening. It was on the scent of angels. Frustrated at being held back by its master, the creature finally gave into a mournful howl, red eyes glowing with pure outrage at the assault against the nether region.

Lilith studied her husband's renewed composure as his gaze scanned the vaulted ceiling, deciding where to strike. She watched him slowly wind the chain in his fist, holding the guardian of his primary gate to Hell back, a strategy developing in his mind. That he'd called his favorite pet, Cerberus, to his side, meant that he'd refocused himself for war.

"I will not fail you," Lilith repeated.

Her husband simply nodded and looked up again, and then was gone.

Excerpted from The Shadows by L. A. Banks

All rights reserved. This work is protected under copyright laws and reproduction is strictly prohibited. Permission to reproduce the material in any manner or medium must be secured from the Publisher