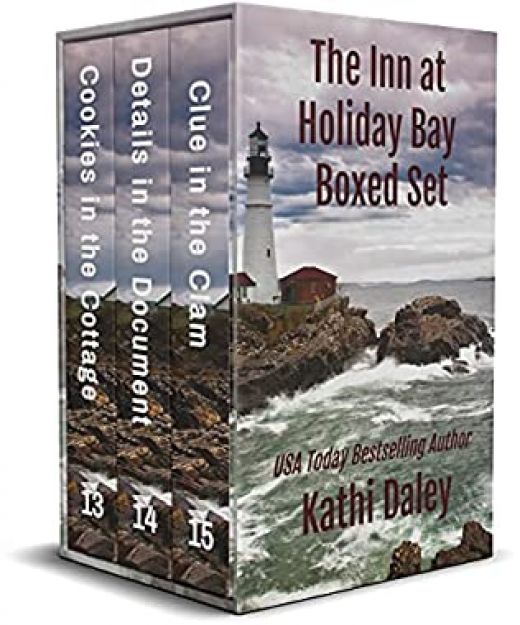 Kathi Daley Founding author
Follow
Abby thought she needed was alone time to heal. What she ended up with was, an inn she never knew she wanted.
Genres: Cozy Mystery
Buy now
Available in:

A heartwarming cozy mystery series about losing everything, taking a chance, and starting again.After suffering a personal tragedy Abby Sullivan buys a huge old seaside mansion she has never even seen, packs up her life in San Francisco, and moves to Holiday Bay Maine, where she is adopted, quite against her will, by a huge Maine Coon Cat named Rufus, a drifter with her own tragic past named Georgia, and a giant dog with an inferiority complex named Ramos. What Abby thought she needed was alone time to heal. What she ended up with was, an inn she never knew she wanted, a cat she couldn't seem to convince to leave, and a new family she'd never be able to live without.In book 13 in the series, a man is found dead at the Rosewood Estate where Shelby, Sage, and Sierra, are staying for the holiday. The three half sisters want answers, and since Colt is out of town visiting family, Abby finds herself pulled into the complex and dangerous investigation. Meanwhile a whole new group of guests check into the inn, each with a story to tell, and Jeremy and Mylie plan a series of special events which has everyone participating in what is to become a very special Holiday Bay Christmas.A heartwarming cozy mystery series about losing everything, taking a chance, and starting again.In book 14 in the series, spring in Holiday Bay is interrupted by a category 2 hurricane, an inn filled with stranded motorists, an unexpected delivery, and a murder, which on the surface, doesn't make a lick of sense. Add to that the fact that the small plot of land that was linked by deed to the land where the inn now sits turns out to be a burial ground for a serial killer, and you have a recipe for disaster.In book 15 in the series, it's time for the annual clam bake weekend which promises to bring not only new guests to know and love but a mystery to solve and an important decision to make. When Abby finds the body of a town council member on the island she's rented for the annual event she joins forces with Colt and Georgia to uncover the layers of clues leading up to this surprising murder.