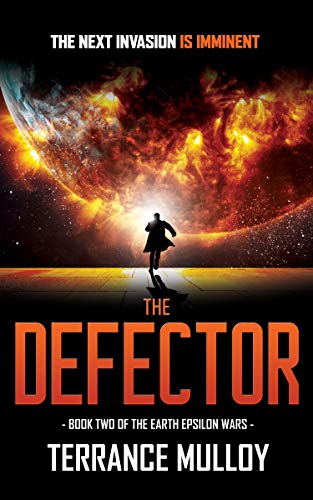 The Emissary was explosive. The Defector is heart-stopping!

In the second thrilling installment of The Earth Epsilon Wars, Matt Reeves and his team, having successfully traveled back in time and taken Dr. Rossiter hostage, set out to assist him in creating the last trump card humanity has left against the Wraith; a deadly, alien-killing pathogen known as the Scourge. But Matt begins to suspect that mankind's future enemy may already be here in the present, lurking patiently in silence, waiting for the right moment to strike.

Is the next Wraith invasion already here?

Matt will not only be forced to question the mission, but also his own humanity while he races against the clock to uncover the truth about this war and the very fate of mankind itself. 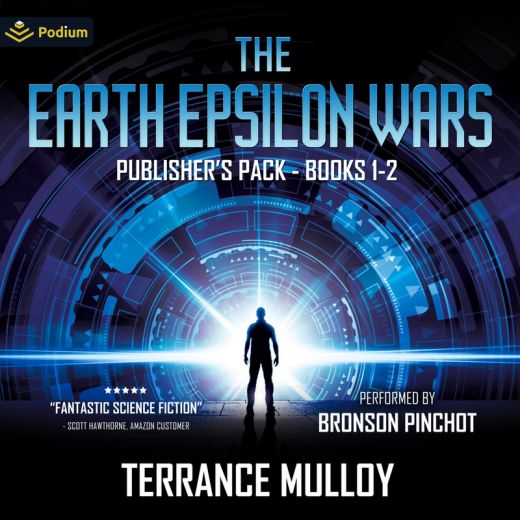 The small convoy of black suburbans climbed up the remote private road that was shrouded by thick woods, the asphalt slick with fresh rain. Occasionally, the tree-line would present tantalizing glimpses of the beautiful Rappahannock River below, but for the most part, this section of the Virginian countryside was way too dark to appreciate at this hour of the morning.

The convoy pushed through a long circuitous drive, and eventually, a good mile deeper into the woods, the trees gave way to a clearing. The convoy reached the end of the road and blasted through the towering iron gates of a sprawling palatial estate, pulling up inside the gravel courtyard. The Rosecliff-style mansion was Stanford White designed, with the surrounding grounds exquisitely manicured, filled with Gilded Age statuary. There was wealth here that defied comprehension.

The doors of the lead suburban sprung open and Marlowe hopped out, followed by three of his men. They hustled to the second suburban and opened the rear passenger-side door, holding it open like Secret Servicemen on Presidential protection detail.

While they waited for their VIP passenger to disembark, Marlowe kept a close eye on the serious looking security guards loitering at the main entrance, all armed to the teeth with Reaper-rifles and Kevlar vests. Despite the guards also being Wraith, Marlowe considered them members of a different faction. One that they reluctantly maintained a fragile alliance with.

Cromwell’s thin legs extended out of the vehicle like the appendages of some hideous black spider. Without breaking stride, he made his way towards the house, gravel crunching under each step. The guards eyed him suspiciously as he blew past them and entered.

He was met by another guard and escorted along a vast oak-paneled hallway, cluttered with priceless art and the ancient busts of Roman emperors. Once they reached the end of the hallway, they crossed through a living room that was larger than most houses, then down another long hallway where there was an abrupt shift in style. The rich Moroccan carpets and portrait-lined walls gave way to polished floors and jet-black marble.

When they reached the closed entrance of a new wing, the guard opened the imposing oak double-doors and stepped aside, ushering Cromwell into a very dark, yet well-appointed study, flanked with mahogany bookcases and opulent French draperies. The only source of light was the small tongues of flame that flickered inside a stone fireplace, illuminating the nineteenth-century écorché-styled illustration of the Human Body Without Skin that dominated the opposite wall.

And with his back to Cromwell, nestled in a Chesterfield leather chair that looked more like a throne, sat Darius Prescott. The Chairman. Of course, like all Wraith, Prescott wasn’t his real surname.

Cromwell took a seat opposite Prescott, an ornate fruitwood table separating the two of them. “You wanted to see me?”

As Cromwell’s eyes adjusted to the darkness, Prescott’s face materialized, looking like some god-awful thing that had risen up from the depths of the ocean. There was no real face to speak of, only a wafer-thin patch of pale skin stretched tightly over jagged lumps of bone. His neck was a bulbous goiter, weighed down and disfigured by horrific tumors. Some sagged and wobbled over the chest of his robe like water-filled balloons. Even for Cromwell, he was hard to look at. “Not me. Them,” Prescott said, his voice steady and resonant.

Cromwell shifted in his chair, an uneven frown creasing his foundation-caked forehead like some geological fault-line.

Prescott grinned at the sight of Cromwell’s unease. “How could you mess up so bad?” he asked, studying him with a reptilian glare.

Finally, Cromwell looked up and mirrored Prescott’s gaze. “The defector was taken care of.”

Prescott gave a dry scoff. “You think that’s their concern? How many more have turned against you? Do you even know?”

“I have operatives across this entire world. They are embedded into every facet of human civilization. I hardly think—”

“You’re in no position to hardly think, Cromwell. Once the Combine ascertained what the USC was doing, they entrusted both of us to make certain their long-term plans could be carried out with the least amount of resistance.”

Prescott exhaled his frustration. “I have done everything in my power to serve them loyally. That loyalty is now being called into question because of you.”

“You’ve always been an obedient pet. Why would your loyalty ever be questioned?”

Prescott ignored the insult and continued. “Because now you have defectors in the United States government attempting to expose us. And as a result, you also have assassinations taking place on public streets using weaponry the Combine has forbidden until the appropriate time.”

“You worry needlessly, Prescott. I’m always one step ahead of our enemies. The Combine knows that.”

Prescott leaned across his table, grimly serious. “Do they? Don’t be so sure of yourself. Two Federal agents found Fawkes’ shard earlier tonight. Exactly how is that one step ahead? And that Infiltrator of yours is also being very loud.”

“Effective is the word I’d use.”

“She was shot and injured.”

“Yes, but she also acquired Fawkes’ shard as intended.”

“Cromwell, she was sent here to disrupt the Emissary Program and acquire that virus. Why isn’t she doing that?”

“She doesn’t need to. The target I have chosen for enhancement will come to us.”

Prescott’s disfigured hand slammed down onto the table like a Judge’s gavel. “What do you think will happen when more humans start taking notice of your little side charade?”

Cromwell did not react to the sudden outburst. He merely examined it with slight amusement. “If that happens, I will simply continue to do the job you are unable to do.”

Prescott leveled a shit-eating grin at Cromwell and leaned back into his chair. “Perhaps I should remind you that your recent actions could be seen as insubordinate behavior. Do you know what they do to those who disobey them?”

Cromwell had heard enough from this insect. He unfolded his legs and stood, gently adjusting his Fedora. “I’d be careful, Prescott.”

“Or what?” he retorted defiantly.

Cromwell calmly leaned over the table, his pale-blue eyes coiled with more venom than a Cobra. “Or, I may need to remind you that all assets are considered… expendable.”

Prescott kept his icy glare on Cromwell as he turned and abruptly exited the room.