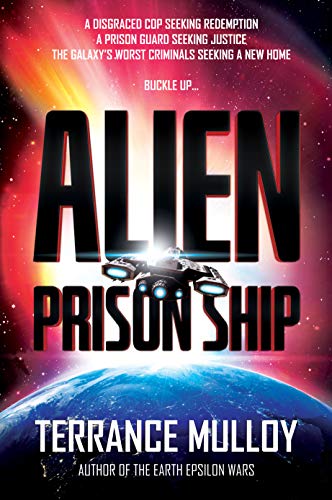 What happens when the galaxy's most dangerous criminals crash-land on Earth?

Sergeant Rhys Scott was already smack-bang in the middle of a bad day when things decided to get worse on a cosmic scale. After a prison ship, transporting the galaxy's worst criminals crash-lands in Downtown Atlanta, Rhys is forced to team-up with the only surviving prison guard to hunt down and destroy the escaped prisoners before they wreak havoc on the entire city.

Inspired by the popcorn blockbuster movies of the 80s and 90s, Alien Prison Ship is sure to please fans who love pulse-racing sci-fi and non-stop action. A must-read for genre lovers!

Uncharted fringes of the Perileos Nebula.

The dark object seared through the vacuum, drifting towards the outer columns of a massive nebula. The ship itself was roughly twice the size of a U.S. aircraft carrier, and if it were not for the brilliant hues of orange and violet silhouetted against it, its hull would be black as the void itself. There was also no identifiable insignia or crest visible anywhere.

That was the idea.

This ship was designed to be unidentified.

As the ship penetrated a frayed curl of orange gas, ionized particles rippled from its rear bank of thrusters, casting a jaundiced glow until it was completely enveloped.

The architecture that formed its interior was brooding and wet, with metallic surfaces that appeared to bristle as if they were somehow alive - somehow monitoring any activity within this floating fortress. Aside from mounted gun turrets, and high-voltage tethers that were studded with security hardware, the interior also contained a series of multi-latticed tiers, with each level housing dozens of pill-shaped sarcophagi that were in constant motion, rotating and shifting position like some insidious jigsaw puzzle that could never be assembled.

Again, that was the idea.

Along these tiers, humanoid forms moved slowly up and down, observing every facet of their surroundings. Every now and then, they would peer into the thin viewport of each sarcophagus as it came to a temporary halt before shifting direction. It would not take long for the casual observer to see that these humanoids were, in fact, guards, and this vessel was a high-security transport of some kind.

The guards were slender and muscular in build, and each one wore tightly fitted black suits that were not too dissimilar from neoprene wet-suits to look at. They appeared to be woven tightly onto their bodies, acting as an additional protective layer of skin. Their facial features were hidden by what looked like futuristic motorcycle helmets with reflective jet-black visors.

One of these guards, Neuto, was a male member of a sentient race of beings called the Vuulgarb. But unlike most Vuulgarbians who served on this particular facility, Neuto’s mandate was to patrol the lowest rungs of the ship. A shitty job by any universal standard. These levels were solely reserved for the worst depths of galactic depravity, consisting of a motley hodge-podge of genocidal tyrants, murderers, despots, and terrorists.

Despite nearing the end of his third watch, Neuto was nervous about the announcement that rippled across his visor a few cycles earlier. Due to the sudden flare-up of a rare supermassive gravitational anomaly in this system, the ship’s Commander had decided to divert from their original vectored course and punch a hole through an uncharted nebula.

Navigating through giant gas clouds was hazardous for a variety of reasons - especially ones like this. It was ancient, yet it was still an active furnace of creation. Deep within, new stars were being forged in a tower of dust and gas, fifty-seven-trillion miles high. It was too immense and awesome for even space-faring beings like Neuto to comprehend. Not only that, there was no shortage of resource-thirsty marauders and cut-throats out here who were fond of hiding in the deep recesses of nebula clouds and asteroid belts.

They were in a bad spot.

Nevertheless, Neuto had a job to do. He continued along the tier, peering into each sarcophagus to catch fleeting glimpses of the incarcerated. When he reached the end of the tier, the sarcophagus nearest to him shifted away, and another larger one slotted into place.

He knew this one well.

Neuto took a moment as if summoning enough resolve before slowly turning to check on the imprisoned occupant.

Inside, the faint neon-blue glow from the surrounding electronics revealed a bruising shape. Neuto caught shimmers of reptilian flesh as the prisoner’s deep cackle rumbled from behind the viewport. It was not a dismissive cackle, but a knowing one. It was meant to taunt Neuto. And it did. These two had history.

Suddenly, a harsh klaxon began to wail throughout the ship. Every guard snapped to the sound, now alert with nervous tension.

The prisoners inside their sarcophagi immediately began to chant over the droning alarm. Louder and louder. The name they were chanting was Venass. It was a name that struck fear into every guard and prisoner unlucky enough to be holed up inside this bucket of black steel

As the chant grew into a deafening roar, Neuto wheeled to the sarcophagi in front of him. The reptilian prisoner had pressed his ugly mug against the viewport and was casting a menacing grin directly at him. No matter how many times Neuto saw this prisoner, his features were still utterly terrifying to behold. He was nothing more than a hulking mass of scaly flesh and knotted muscle. His neck and forehead were riddled with tattooed inscriptions of his personal military faction, and a thick, sinewy scar trailed unevenly down his right cheek, the result of some deadly close encounter from some long-forgotten war.

He was known only as Venass, and he was the most feared warmonger this side of the galaxy.