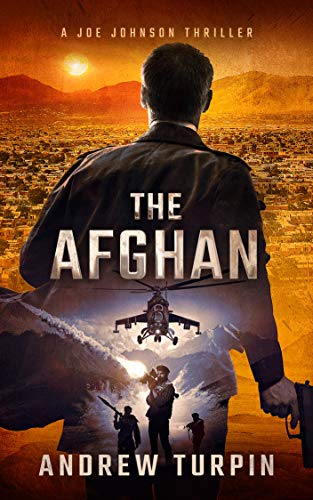 A Cold War attack by Soviet helicopters on an Afghan village. A knife-edge CIA operation that goes wrong. And a vengeful mujahideen tribesman, armed with Stinger missiles. When CIA officer Joe Johnson is handed the tough task by his boss of capturing a Soviet helicopter and forging better contacts among the mujahideen, he unknowingly finds himself up against a sinister KGB rival who wants him dead. But after coming under fire, Johnson comes to suspect that his difficulties stem not just from the Soviets—but from a traitor on his own side. To extricate himself from the web of deceit in which he finds himself, Johnson comes to rely on a female colleague from Britain’s MI6, Jayne Robinson, to whom he grows unexpectedly close. As pressure mounts on Johnson from CIA headquarters at Langley and politicians in Washington, DC, the story reaches a climax during a life-or-death shootout in Jalalabad. The Afghan , set in 1988, is an espionage thriller that forms a compelling prequel to the Joe Johnson series as a whole. It also creates the backdrop for book four in the series, Stalin’s Final Sting , set in Afghanistan, New York City, and Moscow in the present day. Meet Joe Johnson today and read how he uncovers dark secrets. **If you buy The Last Nazi, book 1 in the Joe Johnson series, you will find a link inside the book allowing a COMPLIMENTARY download of The Afghan ** AMAZON REVIEWERS ON THE JOE JOHNSON SERIES: ★★★★★ “Every bit a match for Lee Child and Tom Clancy.” ★★★★★ “A great read, has more twists than a country road.” ★★★★★ “Right up there with Silva/Allon.” ★★★★★ “More than a touch of Forsyth.” ★★★★★ “Far better than Ludlum.” ★★★★★ “If you enjoy the work of Vince Flynn and Nelson DeMille, you’ll be happy to discover Andrew Turpin.”