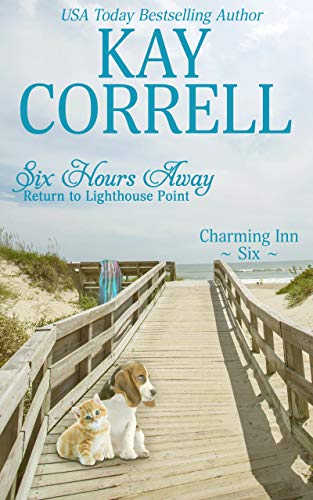 Sometimes unexpected events change everything… for better or worse. Zoe decides to stay on Belle Island to help her uncle and the town prepare for an approaching tropical storm. She has no idea that one single decision could change her life forever. A tropical storm, secrets revealed, and the unraveling of many of the island's mysteries. A delightful continuation of the stories of the lives and loves of the people of Belle Island. Try this heartwarming story in the Charming Inn series. This is book 6 in the Charming Inn Series (a spin-off from the Lighthouse Point series): One Simple Wish - Book One Two of a Kind - Book Two Three Simple Things - Book Three Four Short Weeks - Book Four Five Years or So - Book Five Six Hours Away - Book Six Or try the Lighthouse Point series. Either series can be read first, so jump right in. The Lighthouse Point Series: Wish Upon a Shell - Book One Wedding on the Beach - Book Two Love at the Lighthouse - Book Three Cottage Near the Point - Book Four Return to the Island - Book Five Bungalow by the Bay - Book Six