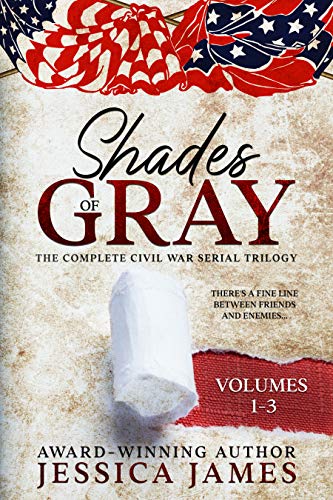 READER ALERT: The expanded version of SHADES OF GRAY is here! If you're a fan of GONE WITH THE WIND, fall in love again with this epic Civil War Serial Trilogy: SHADES OF GRAY (Duty Bound, Honor Bound, Glory Bound)

Called the “greatest love story ever told” when it was first released in 2008, Shades of Gray has been expanded at the request of readers to include dozens of new chapters in this complete trilogy set.

The original title has more than 1,000 5-STAR REVIEWS like this:

“Rivals Gone With the Wind as my favorite novel of all time. I can think of no better way to describe it.” – Amazon reviewer

“Five stars does not do this book justice as it is well beyond that rating for me. It is so well written and the characters have such depth that it brought me to tears many times.” – Terri D

“It is a book that I think could have the impact of a Gone With the Wind.” –   Jonathan A. Noyalas, Former Assistant Professor of History and Director for Civil War Studies, Lord Fairfax Community College

Honor and conviction clash with loyalty and love in this poignant Civil War tale that pits brother against brother. Readers will discover the fine line between friends and enemies when the lives of two tenacious foes cross by the fates of war and their destinies become entwined forever. A classic tale of courage, honor, and enduring love that has been praised by both men and women—from professors of history to avid romance readers.

Author Jessica James uniquely blends elements of romantic and historical fiction in this deeply personal and poignant tale that, according to one reviewer, “transcends the pages to settle in the very marrow of the reader's bones.” Winner of numerous national awards, James has received critical acclaim for this page-turning story of courage, honor, and enduring love.

What they said about the original Shades of Gray:

“If you want to read a book you will never forget and will think about for months after reading it, read Shades of Gray. The book took my breath away. Honestly, you will not sleep.” – A Bookworm's Dinner Blog

“A classic love story as much as it is a war story.” – Civil War Book Review

“Andrea and Alex will surely take the place in my heart of Rhett and Scarlett as the perfect Civil War fictional love story!” – A. Deyarmin, Reviewer

"Not since reading Gone With the Wind have I enjoyed a book so much as Jessica James's Shades of Gray! I could not put it down, from start to finish!" - S. Winch

"This is what epic stores are made of. I will not get rid of this one. It is a keeper that I will read time and time again." - T Weath

A piercing bugle blast preceded the sound of galloping horses by mere seconds. Confederate cavalry Captain Alexander Hunter tore his eyes away from the horse and rider he pursued and focused on the Federal cavalry unit that had appeared out of nowhere to pursue him.

This was not the first time the large black steed with its agile rider had been spotted in advance of a Union assault—but Hunter swore today would be the last. Signaling his men to scatter, he spurred his mount toward the forest where his foe had disappeared. His band of warriors took off in every direction, their escape aided by a roiling mass of dark-bellied clouds that launched their own assault.

With the storm as an ally, Hunter knew the Federal cavalry would not sustain the chase. He didn’t worry about his men who were familiar enough with the land to evade the enemy no matter the weather. He only cared to find the Yank who’d led him into the trap so the rascal could be punished.

Hunter lowered his hand to one of the revolvers on his hip as he entered the dimly lit forest. Damn that scoundrel. The timely arrival of Union reinforcements over the past few months could no longer be considered a mere coincidence. It was time for this cunning adversary to pay for the disruptions he’d caused.

Guiding his mare through the underbrush and around fallen trees, Hunter soon lost hope of finding his antagonist in the dense foliage. The rider had a habit of appearing, only to disappear into thin air. Even today when he’d thought the elusive character was within his grasp, Hunter had instead found himself in another trap.

The distinctive sound of a rambling creek replaced the hushed patter of rain, pulling Hunter from his thoughts. “How about a drink, ol’ girl?” He urged his mare forward, leaning low over the saddle to avoid tree limbs, and then jerked on the reins at the sight of a youth crouched on the opposite bank gulping water by the handful. Hunter’s gaze shifted to the horse hungrily grazing on green shoots at the brook’s grassy edge. Enormous and coal black, its chest glistened and frothed from being ridden hard.

Hunter reached for his revolver and blinked to make sure the fading daylight was not playing tricks on his vision. At this distance, the enemy scout was smaller and younger than he expected. He cocked his weapon and shouted across the fast-moving stream, “Don’t move!”

Startled, the youth stood and challenged him. “What do you want?” he asked, holding nothing but dripping water.

Hunter’s confusion intensified as he stared at his opponent. Dressed in an oversized coat, slouch hat pulled low, and baggy trousers, the boy looked harmless enough. Can this really be the Union scout I’ve been chasing?

One more glance at the horse answered his question. Few such horses existed in this part of the country, certainly none of such quality that had not already been confiscated by one or the other of the armies. This was no guiltless civilian. This was a Yankee. And a cunning one at that.

“I think you know what I want. It appears we’ve spent the last week watching each other, and we still have not been properly introduced.”

Hunter urged his mare down the steep bank to a sandbar, but hesitated. The creek was not wide, but the swift-running current and slippery rocks made fording here treacherous.

“If I may offer you some advice, sir?” The youth stood calmly by the water’s edge. “This is not a safe place to cross. If you go right down there—”

He pointed helpfully downstream, but Hunter interrupted. “Thank you for the suggestion…” He urged his horse forward into the ice-cold water as he talked. “But I’ll not leave here without the scoundrel who’s been reporting my movements to the enemy.”

Hunter attempted to keep his eye on the youth while guiding his mount through the maze of rocks in the streambed. About halfway across, he saw the boy bolt to his grazing horse and gather the reins. Reacting instinctively Hunter fired a shot, causing his mare to lose her footing and plunge to her knees.

The panicked animal struggled a moment before bounding up with a great surge of strength, knocking him off balance. As Hunter tried to regain control, the mare lunged again, this time unseating him and sending him sailing backward.

Hunter felt himself falling, seemingly in slow motion, until there came a skull-cracking thud and a blinding flash of light.