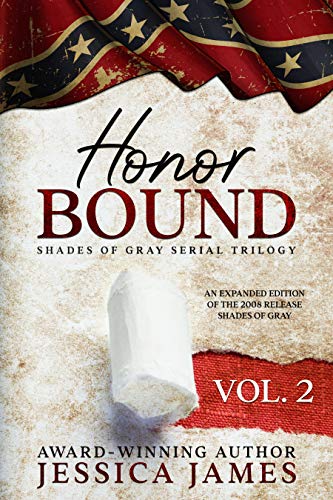 Called the “greatest love story ever told” when it was first released in 2008, Shades of Gray has been expanded and improved in this new three-book series that has dozens of new chapters and introduces new characters. Fall in love again and discover the fine line between friends and enemies in this emotional Civil War love story.

Shades of Gray Civil War Serial Trilogy consists of three books: Duty Bound, Honor Bound, and Glory Bound, as well as an Epilogue that you can request from the author.

Honor and conviction clash with loyalty and love in this epic Civil War novel that pits brother against brother. This is a classic tale of courage, honor, and enduring love that has been praised by both men and women—from professors of history to avid romance readers.

Author Jessica James uniquely blends elements of romantic and historical fiction in this deeply personal and poignant tale that, according to one reviewer, “transcends the pages to settle in the very marrow of the reader's bones.”

What they said about Shades of Gray:

“It is a book that I think could have the impact of a ‘Gone With the Wind.” – J. Noyalas, Assistant Professor of History

“A classic love story as much as it is a war story.” – Civil War Book Review“Andrea and Alex will surely take the place in my heart of Rhett and Scarlett as the perfect Civil War fictional love story!” – A. Deyarmin, Reviewer

"Not since reading Gone With the Wind have I enjoyed a book so much as Jessica James's Shades of Gray! I could not put Shades of Gray down, from start to finish!" - S. Winch

"This is what epic stores are made of. Do yourself a favor and pick up this book ... especially if you love The Civil War. I will not get rid of this one. It is a keeper that I will read time and time again." – T. Weatherby

"I'm a civil war historian with roots deep in the southern states and I couldn't put this book down. I'm not usually into books with a romantic element, but Shades of Gray really is that good!" – B. Webb

Shades of Gray, first published in 2008, was later published as Noble Cause, with a new happily-ever-after ending.

This novel is written for the General Market: Contains little or no; sexual dialogue or situations or strong language. May also contain some content of an inspirational/religious nature. Similar romance novels in this genre may be categorized as: Christian romance, inspirational romance, Christian fiction, and clean, wholesome romance.