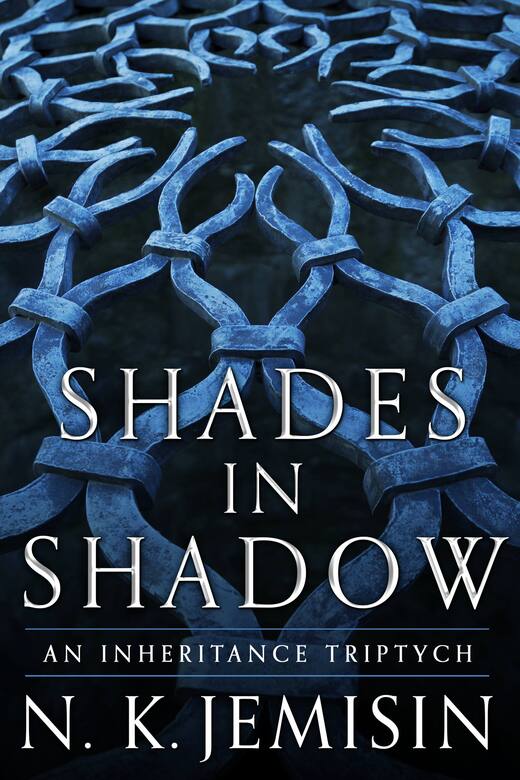 Three brand new short stories by Hugo, Nebula & World Fantasy Award nominated author N.K. Jemisin, set in the world of the Inheritance trilogy. From the shadows of the greater stories, away from the bright light of Sky and wending 'round the sagas of the Arameri, come three quieter tales. A newborn god with an old, old soul struggles to find a reason to live. A powerful demon searches for her father, and answers. And in a prequel to the Inheritance Trilogy, a newly-enslaved Nahadoth forges a dark alliance with a mortal, for survival. . . and revenge. Return to the world of The Hundred Thousand Kingdoms in these three interconnected short tales.

“At the dawn of reality I was myself. There was nothing and no one else to influence me—only the Maelstrom that had given birth to me, and it did not care. I tore open my flesh and spilled out the substance of what became your realm: matter and energy and cold black blood. I devoured my own mind and reveled in the novelty of pain.”

Tears sprang to my eyes. I swallowed hard and tried to will them away, but abruptly the hands returned, lifting my chin. Fingers stroked my eyes shut, brushing the tears away.

“When I am free, I will choose,” he said again, whispering, very close.

Want is a thing. Nahadoth has never lost the habit of attempting to classify things, because things were once so difficult to understand. At the beginning. Time is a thing, too; Nahadoth knows this now, has accepted the conceptualization of beginningness and endingness and whereness and whoness because these are all things that make life more interesting, though it is also interesting to discard them. Whatness, however, is always hard. Nahadoth is everything, after all.

No. Nahadoth—he? He, per Itempas’s decree, how predictable—he is not everything. There was a beforetime in which Nahadoth encompassed all that could be perceived, except that which was Maelstrom. But that time is long past, and he does not miss it, because now there is another he and for a time there was a her and after that, many. Among and apart from them all, he has become the whatness that is called Nahadoth.

He savors his name again for the several quintillionth time, marveling again at its whole round syllables, its perfect appropriateness. He has loved this name, this thing, since Itempas first bestowed it upon him. His name is a good thing, and he likes it.

Itempas was a good thing, too, once.

Nahadoth wants and does not know what or why.

The boy is not lost the first time he comes. Many mortals stumble upon Nahadoth’s chamber and just as quickly flee. This one sought him out. That is a new thing, though not interesting in and of itself. Simply different.

Nahadoth’s chamber is a room in a place. The body into which Itempas has chained Nahadoth resides here, anchoring him in the mortal realm, so it is fitting that the room is at the bottom of a building. And within the room is a chamber—a pit, really, into which the mortals have thrown him. How poetic. Perhaps it is better called a well. It has a wall. And he wells at the bottom of it, a living spring gushing forth everything that they hate—even though if he did not do so, they would cease to exist. By keeping him here, they hope to contain the curling, liquid eddies of substance that appear on those occasions when the world spins into shadow, and the body leaks some fraction of his darkness. (The body sleeps at the bottom of the dark well by day. He has no power over it, other than that, but he is too jealous of what he has to give even that up.) He stays where they have put him because he does not care. One place in the mortal realm is as bad as another. But he is also out, about, roaming, because that is what he is, and all wheres are everywhere to him. He is Nahadoth, and that is everywhere and everything, except wherever and whatever the Maelstrom is and wherever and whatever his siblings are.

Sibling. Just one now. That is a thing, a familiar one, but not a good one.

He is contemplating this loss when the boy comes, and perhaps because of this Nahadoth does not notice at first. Another mortal, another day. This one says something, or maybe whispers, or maybe laughs. Nahadoth pays no attention until suddenly the boy thrusts his face into him.

A trivial distinction. The room is dim. The boy was already within him. But the boy breaches the surface of the well’s blackness, and that is different. Different is interesting, so Nahadoth does not remove the boy’s face. Yet.

“So it isn’t true.” The boy, who has bent to plunge his head into what resembles a pool of relentless black, laughs a little. (This tickles.) “They said…Well, they say a lot of things about you.” He straightens, wiping his face without thinking, then looks surprised to find his hand dry. Then he chuckles again.

There is something in the boy’s laugh that Nahadoth understands. That unsteadiness, with a core of emptiness. That little waver, as if the laugh teeters between humor and hysteri. . .