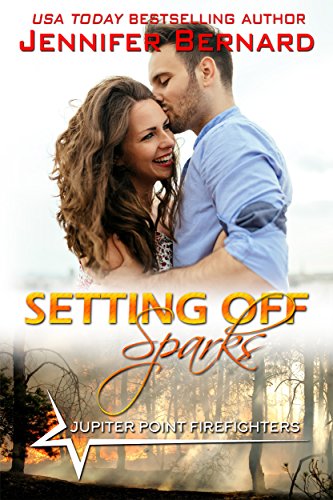 USA Today bestselling author Jennifer Bernard returns to the town readers are falling in love with...

In one fiery moment, Finn Abrams went from cocksure firefighter to scarred survivor. Now all he wants is to put his life together again, get back on a hotshot crew, and figure out exactly what happened to him during the Big Canyon burnover. He never expected to be knocked off his feet by a gorgeous, no-nonsense stranger to Jupiter Point—the one woman who seems completely immune to his famous charm.

Coolly practical, Lisa Peretti knows she won't be in Jupiter Point for long. As an ER nurse in Houston, she helped a friend escape a dangerous situation. Now she's hiding out in the little town, determined to keep a low profile. The last thing she needs is attention, especially in the form of the tabloid-starring, actress-dating, too-sexy-for-his-own-good Finn Abrams.

Still, Lisa can't resist someone who needs her help. As long as she can keep her distance, working with the local hero as he recovers from his burns should be no problem, right?

Wrong. When danger follows Lisa to Jupiter Point, she's startled to find Finn ready, willing, and more than able to come to her rescue. Add to that a meddling movie crew, some kindhearted locals, and her own unruly heart, and Lisa quickly loses any shot at keeping her feelings under cover.

Fire season in Jupiter Point is always smokin' hot...but this time it's going to be Setting Off Sparks.

Finn Abrams had aced every training drill, certification test and physical challenge on the way to becoming a wildfire hotshot. He could do forty-two sit-ups in under a minute, followed by thirty push-ups and a five-mile run up a mountain wearing a forty-five-pound pack. He’d made top marks in every fire science course, and his crew captain called him the best rookie he’d ever hired.

But right now, staring down the massive flaming beast known as the Big Canyon Wildfire, he realized nothing could prepare you for this. Not even a whole summer of fighting fires, of proving himself in the hundred-degree heat, cutting line with guys who’d been doing this for years. This fire was so ferocious, so unpredictable. It had just changed course again and was now headed right toward the twenty members of the Fighting Scorpions Hotshots. Acrid whirlwinds of smoke blasted the crew and the roar of the fire-generated wind deafened them. Finn nearly choked on the hot stench of burning leaves and tree trunks. To one side of their location, the bare rock wall of a canyon loomed like an oasis in a world gone mad.

He barely heard Sean Marcus when he shouted the command to the crew.  “We’ll deploy here.”

Oh fuck. Deploy. That meant the crew members would shake out their emergency shelters and hunker down as the flames ran over the top of them. A burnover, the hotshots called it. The worst possible scenario. They’d have to trust their lives to a thin layer of aluminum fabric. It was their only chance for survival.

It was a good call, and Finn knew it. He’d trained for this. He knew the drill. He wanted to follow the order to deploy his shelter. His life depended on it.

But he couldn’t move. Couldn’t make himself move.

Josh Marshall whipped out his shelter and dropped to the ground. Rollo Wareham did the same, barely managing to squeeze his big body under the edges of his tent.

But he couldn’t. Because all of a sudden, he was somewhere else.  He was a boy trapped inside a world on fire. His parents were downstairs. They’d come back earlier, drunk and laughing from the bar where his father worked. He was hiding from the fire inside his toy chest—an old steamer trunk. He kept screaming for his parents but no one came.

With shaking hands, he opened the trunk lid just a crack. Orange flames filled the entire doorway like monsters. That was his death out there. He knew it. The fire was coming for him and he was trapped in this tiny space, alone and about to burn to death.

Sean shouted something and ran toward him. The world came back in a hot rush. Big Canyon. Wildfire. Deploy. NO.

He yelled something to Sean, words of pure panic—he didn’t even know what they were. He spun away and ran from the wildfire. He heard more shouting behind him, but then the roar of the flames overtook the sound.

Finn ran the way he’d wanted to back then, when his toy chest was his shelter. He ran until he came to his senses, until his lungs ached for oxygen. He bent over, heaving, shaking. Behind him, a wall of flames separated him from his crew. Smoke unfurled toward him. What had he done?

He had no idea how long he’d been running, or which direction. He also had no idea what to do next. So he veered toward the next downslope. Maybe he could find a cave or a deep ravine the flames wouldn’t reach.

Heat fanned his back. He fought with his panic.

The wildfire was coming. He was going to die.

And then he saw a flash of cool gray off to the side. He blinked—was it smoke? Rock? Something that could help him? Tears streamed from his stinging eyes and he stumbled onto his hands and knees.

He pitched forward, half-tumbling, half-scrambling to his feet. The gray expanded to include some deep brown and even black. It was a stream bed. A dry one with an exposed gravel bottom.

He ran for it with everything he had. He dove into its exact center, where several feet separated him from the fire devouring the forest on either side of him. He plastered himself face down against the gravel to stay as low as possible.

Again that same vision came back to him. The steamer trunk. The terror.

He was five years old. His name was Elias, not Finn. And he was going to die.

Something whacked him in the face. A flaming log had flown through the air and struck him on the head. He batted it away as pain erupted across the left side of his face. He rolled to the side but not quickly enough, and the wind blew the burning wood against him and all of a sudden his entire side was on fire, despite his fire-resistant Nomex pants and shirt.

He rolled over to suffocate the flames, even though the agony made him scream.

Everything went dark.  When he came to, the entire landscape around him was a blackened, smoldering wasteland. But he was alive.

Over the next few hours, he hiked across the black toward the nearest checkpoint. Each step sent pain shooting through him. His clothes were rags, his face and body burned and throbbed.

And the entire time, he kept asking himself one thing. Where the fuck had that memory come from?

As far as he knew, he’d never been trapped in a fire. His name wasn’t Elias. His father didn’t work at a bar, he ran a movie studio and dated one actress after another. He hadn’t hidden in a toy chest. He’d never owned a toy chest.