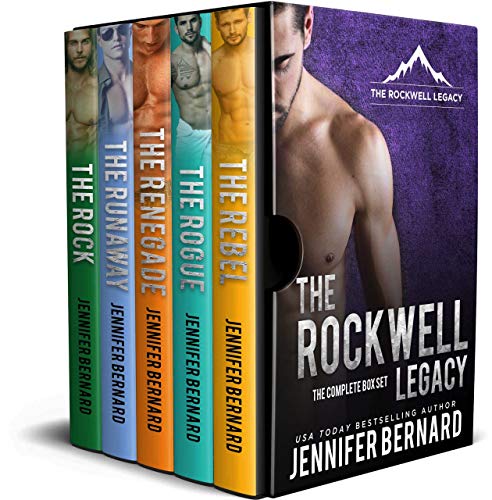 For the first time, the complete Rockwell Legacy series is available in one box set!

“I was certain my Kindle was going to melt! A really great series that I would highly recommend.” 5 Stars

Every family has its secrets.

Deep in the Cascade mountains, the Rockwell family has been running charming Rocky Peak Lodge for generations. But now, that legacy is at risk...unless Kai, Griffin, Isabelle, Jake and Gracie can find a way through the secrets and lies of the past.

Only one thing could bring rescue paramedic Kai Rockwell home to Rocky Peak Lodge—a threat to his family. He knows his father's new nurse aide Nicole Davidson is hiding something, but their crazy chemistry makes it hard to see straight. Equally determined, equally passionate about protecting their families, the two don't know if they should be enemies or lovers. Yet they can't resist each other...no matter the price.

Griffin Rockwell has returned to Rocky Peak Lodge with a secret. Locals still consider him a hero, but these days the best he can do is play bodyguard to the fascinating new waitress at his brother's pub. But Serena Riggs has a secret of her own; she's investigating the disappearance of her father. When another threat surfaces, the only place she feels safe is in Griffin's arms...and in his bed.

Battling a takeover, billionaire Lyle Guero has been asked by his board of directors to lay low. What better place than Rocky Peak Lodge, his latest silent investment and home to Isabelle Rockwell? The beautiful trauma surgeon has haunted his thoughts ever since an unforgettable airport encounter; now he has a second chance at the one thing his billions can't buy.

A bombshell long-lost memory finally explains why Gracie Rockwell never quite fit in with her boisterous family. Desperate for answers, she leaves her beloved Rocky Peak Lodge in search of the little boy who saved her so long ago. Did he grow up to be the gorgeous-but-guarded marina owner Mark Castellani? If only she could pry some answers from her enigmatic new boss—and get rid of her massive crush.

Jake Rockwell, still haunted by the death of his mother, is determined to track down her killer. He hires private investigator Olivia James because of her stellar reputation; their sizzling connection is just an inconvenience. But the more secrets they expose, the harder it is to resist their attraction. The final astounding revelation he and Olivia uncover could blow the Rockwells' world apart—permanently.