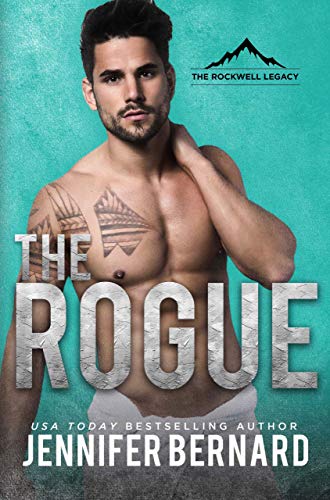 Griffin Rockwell has returned to Rocky Peak Lodge with a secret. Not even his family knows why he left his beloved sport of motocross at the top of his game. When his brother needs a favor, he can't say no, even if it involves the pub's sexy new employee—the one he's clashed with ever since they met.

Serena Riggs has a secret of her own. She's searching for her father, last seen in the small Cascades town years ago. Someone wants her to stop—but she's not one to back down, especially with a sinfully hot temporary “bodyguard” by her side. When another threat surfaces, the only place she feels safe is in Griffin's arms...and in his bed.

As the couple falls deeper by the day, danger looms from a direction they never imagined. Can their love survive the most stunning secret of all?

There ought to be a word for watching one of the hardest moments of your life play over and over on repeat. Oh yeah…there was one, Griffin thought as he slid into a seat next to his father. It had four letters and began with H.

Griffin’s very own personal hell right up there on the big flat screen in the media room at Rocky Peak Lodge.

The good news was that this viewing had an audience of one. The bad news? That audience was “Mad Max” Rockwell.

“Know how many times I’ve watched this?” Max demanded with his trademark scowl.

“I guess the classics never get old.”

Which could describe most days of the week.

“How could that be a classic?” Max complained. “It doesn’t make any sense, no matter how many times I watch.”

Griffin stretched his legs out and tilted his head back. Too bad he didn’t have popcorn for this travesty. “Look, we’re almost at the good part.”

On the big flat screen, the anchor of Motor Sports Tonight appeared. “We all know him as Rogue, because ever since he first blasted onto the pro motocross scene, he’s done things his own way. Griffin Rockwell—always unpredictable, always one of the most entertaining riders to watch, always a magnet for attention—dropped a major bombshell tonight. At the peak of his career, in perfect health, at the age of thirty, he’s…retiring. Yes, that is correct, and we’re having trouble believing it ourselves.”

Griffin’s face, live from another studio, popped up on the screen.

“Griffin Rockwell, I almost feel like I’ve been punked. Is this some kind of elaborate psych-out you’re pulling? You don’t look like you’re ready for the old folks home.”

TV-screen-Griffin smiled. Real life Griffin recognized that smile—it was the fake one he pulled out when he wasn’t amused but had to pretend to be. “You know me, Pete, I like to keep you press people off-balance. But it’s all true. I’ve raced my last race. I’m done. I’m out. And if you think you’re surprised, you should hear what my manager has to say.”

Real-life Griffin grimaced. Make that “ex-manager.” You couldn’t really manage a career that didn’t exist anymore, after all. But after Sally’s initial meltdown, he’d promised to consider it a “break” rather than a final decision. He could always “un-retire.” That kind of thing didn’t happen very often, but he was “Rogue” so no one would be shocked if he did the unexpected.

“You haven’t publicly revealed your reason for retiring,” Pete the Sports Anchor continued. “So if you want to get anything off your chest, go ahead, man. We’re all ears.”

“Well, geez, I would, but I see that little red light flashing and I’m pretty sure that means there’s a commercial break coming.”

“Ignore the red light. This is my show. Go on, let’s have it. What would make you walk away from such a badass career?”

TV-screen Griffin arranged his face into serious lines. Griffin remembered exactly how it felt to be on the spot like that. He’d wanted to tell the real story, but he just couldn’t do it. Despite being a public figure, he craved privacy and hated having anyone know his business. Especially this part of it.

“The truth is, I’m leaving motocross for a very simple reason. To spend more time with my family,” he intoned, like some kind of asshole politician.

“Kind of a side-effect of always being on a dirt bike.”

“You’re saying you’re retiring so you can get married?”

“No. No. No.” His rapid-fire panicked series of “no’s” sparked laughter amongst the camera crew. “Nothing like that. I got some, uh, family issues that need tending, and family comes first. That’s just the way it is. The motocross tour will just have to carry on without me.”

At that point he looked to the audio guy to help him get the damn mic off. He was one step from ripping it off himself, but all kinds of rumors would follow from that. Griffin “Rogue” Rockwell storms out of interview … Rockwell stonewalls, refuses to answer retirement question.

“Family issues?” Max was saying, his mane of white hair vibrating with his incredulity. “What issues? The Rockwells don’t have issues. This still isn’t making any goddamn sense.”

Seriously, why had he decided to come back to Rocky Peak? With his world crumbling around him, he’d wanted to be home. But so far he hadn’t told his family any more than he’d told Pete the Sports Anchor.

“Dad, look around. This lodge needs help. You’ve got a heart condition. Kai’s getting married. Jake’s—”

Griffin swung around as his younger brother strolled into the room. Jake rarely came up to the lodge because he was so busy running his pub in town. Something big must be going on to bring him up here.

“I don’t know. You must have something going on in your life that I can help with.”

Jake’s unexpected seriousness brought Griffin to immediate attention. For a few years, after Mom had died, Dad had retreated into grief, and Kai had taken off, Griffin had been the main “parent” to his three younger siblings. That habit of instant concern never died. “What’s up?”

Griffin didn’t miss a beat. “Yes, I’ll sign a poster for your bar.”

Jake snorted. “I have one of those already. Everyone wants to throw darts at it now.”

Griffin grimaced as he caught Jake’s eye. Jake hadn’t pressed him on his decision to quit. No one had, but he knew they were all curious. “How quickly they turn,” he said lightly, as if it didn’t matter at all.

Which was only partly true. He didn’t mind leaving the spotlight. He’d never particularly liked it. But he hated disappointing people.

“It’s just like when you quit the football team,” Max went on. “Star one minute, goat the next.”

Griffin’s jaw went tight and he didn’t answer that jab. Mention of his high school football team always made him tense, even so many years later. Luckily, Jake stepped in.

“Greatest of all time,” he told Max. “That’s what Goat stands for, and that’s Griffin. Anyone disagrees, I’ll confiscate their darts.”

Gratefully, Griffin unwound himself from his seat and stepped next to Jake. “Now that just earned you a favor. What do you need, bro?”

Jake gestured toward the hallway—apparently he didn’t want Max to hear the favor.

Griffin squeezed his father’s shoulder. “Be right back, Dad.” He picked up the remote and clicked away from the DVD player, to a cable movie channel. “Look, they’re playing Caddyshack. One of your favorites. That’s got to be better than the Griffin Rockwell Retirement Show.”

His father sent him a peevish look. “You came in here to change the channel?”

“No, I came in here—” He broke off, because his moment of determination had passed. He’d come in here to explain to his father why he’d retired, but he wasn’t ready to tell the full story yet. He just wasn’t.

Out in the hallway, Jake threw another curveball at him. “So, I know you just agreed to this favor sight unseen, and I’m digging it. But—”

“Whatever it is, don’t worry about it, I got your back,” Griffin said impatiently. “Don’t I always?”

“Yes, but,” Jake hesitated, “remember my new bartender, Serena? This is about her.”

Of course he remembered Serena. She’d waited on him the night he’d come back to Rocky Peak and they’d gotten off on a very wrong foot. “The hot redhead? The one who can’t stand me? What about her?”

Griffin stared at his brother narrowly. “Is this a setup? Because yeah, you’re right, that’ll never work. She doesn’t like me.”

“No, nothing like that. I need you to be her bodyguard.”

After a long, astonished moment, Griffin tilted his head and let out a laugh so hearty it shook the rafters of the old lodge. “Does she know that?”