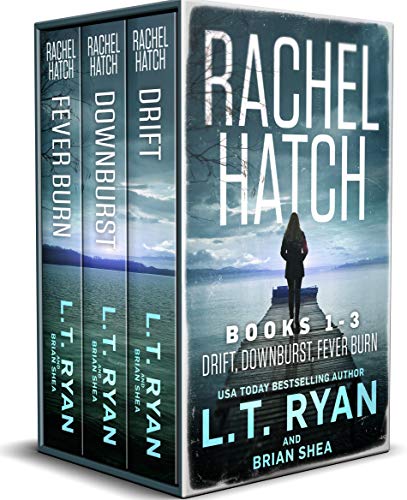 THEY KILLED THE WRONG GIRL. RACHEL HATCH WILL MAKE THEM PAY.

Ex-Army criminal investigator Rachel Hatch is a drifter. No home. No commitments. Until her sister's drowning drags her back to the town she left fifteen years ago.

Convinced her sister's death was no accident, Hatch partners with the local sheriff, Dalton Savage to uncover the truth. Every answer unlocks another question, and as the investigation begins to unravel, Hatch and Savage find their lives on the line.

Hatch is forced to use her special set of skills - forged on the field of combat - to learn the truth about her sister and bring those responsible to justice.

The first novel in one of the most highly-anticipated collaborative series this decade, DRIFT is a tightly woven story, with deeply-developed and endearing characters that will have you rooting for them at every turn, set at an exhilarating pace that will keep you turning pages late into the night.

Seeking answers to her father's death,
Hatch finds herself in a small town outside of Las Cruses, New Mexico
Controlled by a vicious street gang.
A family caught in the crossfire.
Hatch sets out to make things right.

The quaint town of Luna Vista, turns out to be anything but. A ruthless gang runs a section of the town. In searching for the truth about her father's past, she's pitted against a criminal network that exposes the town's dark secret. Hatch puts her life on the line to help a boy escape the clutches of the gang. Her act puts her in peril.

She finds herself in a battle as treacherous as any she's faced before, against an enemy hellbent on stopping her. Danger lurks around every corner. Hatch 's code, a simple one, Help good people and punish those who hurt others, may prove more difficult a task as the forces against her mount. A whirlwind of threats converge like the unpredictable desert weather and threaten to crash down upon her.

Not afraid of a good fight, Hatch prepares herself for her most difficult battle of her life.

Downburst is designed with the dynamic pacing and story telling fans of L.T. Ryan and Brian Shea have become accustomed to. This sequel is filled with twists and turns, and the relentless pacing that will keep readers turning pages until the very last word.

Seeking justice for her father's murder,
Leads Hatch halfway across the world.
A ruthless warlord stands in the way.
Hatch is forced to take a stand.
And it very well could be her last.

On the trail of her father's killer, Hatch finds the path leads to a remote village in Africa. A vicious warlord controls the area in a stranglehold of violence. Hatch finds a fight she never sought, but one her personal code won't let her walk away from.

Outnumbered and outgunned, Hatch is forced to hold nothing back if she ever hopes to get out alive.