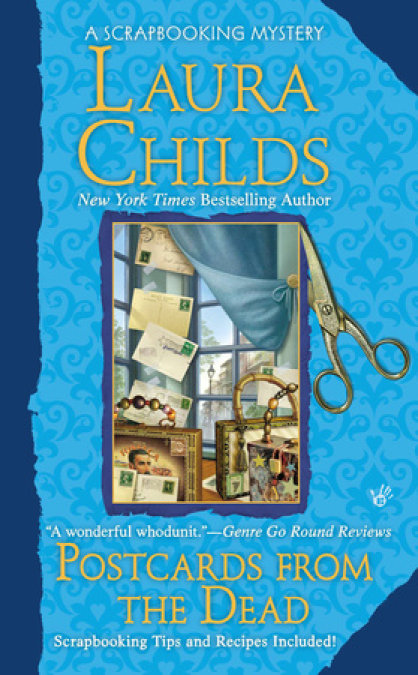 Laura Childs' New York Times best-selling Tea Shop and Scrapbooking mysteries have earned her a devoted readership. Set amidst the hustle and bustle of Mardi Gras, this much-anticipated 10th novel in the series follows scrapbooking maven Carmela Bertrand as she investigates the grisly death of TV reporter Kimber Breeze. It's not long before Carmela starts receiving spooky postcards -- signed by Kimber herself -- and realizes the case entails much more than she bargained for. 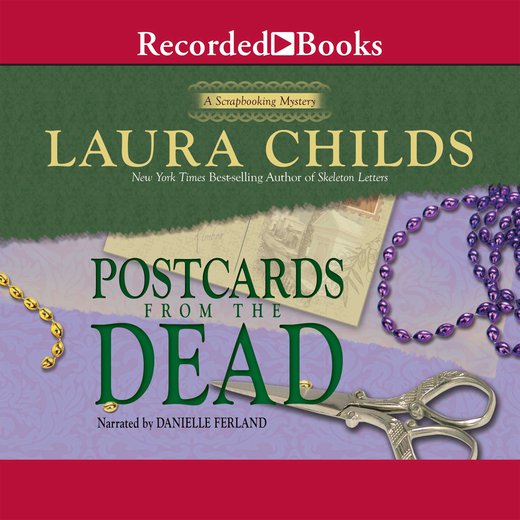 A dazzling night filled with gigantic floats, silver beads, dizzying lights, fire-twirling flambeaus, and a crowd that was fueled by too much Dixie Beer and Southern Comfort. This Wednesday evening, the Loomis krewe’s parade rolled through New Orleans’s historic French Quarter, pumping out all the brazenness and utter abandon they could muster. And the city of New Orleans fairly sizzled, caught in the throes of another fantastical Mardi Gras celebration, beginning with the Epiphany and ending with that crazy-costumed, over-the-top super finale known as Fat Tuesday.

Smack-dab in the middle of it all, Kimber Breeze, the perky, Botoxed blond reporter from KBEZ-TV, stood on a delicate wrought-iron balcony outside the Hotel Tremain. Four floors above Royal Street, she chirped happily into her microphone and smiled broadly at the cameras as she interviewed various French Quarter denizens and broadcast parts of the parade spectacle live.

Inside, in the elegant but slightly frayed Bonaparte Suite, fifty costumed revelers sang and danced and whooped it up. Most were there for the free booze; only a few had been invited for actual interviews.

Carmela Bertrand, owner of the Memory Mine scrapbooking shop, was one of those waiting her turn on the balcony. Carmela wasn’t a big fan of Kimber Breeze, but she knew a photo op when she saw one. And her business, still not fully recovered from that enormous hiccup known as Hurricane Katrina, could always use a punch of publicity.

“This is taking forever,” Carmela drawled to her best friend, Ava, who had come along to keep her company. Having taught a morning class on stencils, then spent the afternoon unpacking boxes filled with new mulberry and banana leaf papers, Carmela wasn’t in the mood for the zydeco music and the fever-pitch energy that pulsed through the room. Carmela would have preferred to be tucked snugly into her little French Quarter apartment, watching Wheel of Fortune and enjoying a calm, relaxing evening with her two dogs, Boo and Poobah.

“C’mon, cher, enjoy the party!” urged Ava. Ava was a party girl and former Southern beauty queen, while Carmela was clearly the laid-back cocooner. “Loosen up and live a little!”

Carmela smiled tolerantly and smoothed back a strand of honeyed blond hair from her short, choppy bob. Not quite thirty, Carmela was lithe and youthful-looking, with eyes the same flat blue-gray as the Gulf of Mexico, and lush lashes that tipped up slightly at the ends. Though her peaches-and-cream complexion rarely saw the need for makeup, she did enjoy the natural hydration properties of Louisiana’s industrial-strength humidity. Carmela was also the one who favored more classic (okay, conservative) clothing in colors of navy, cream, and camel, while Ava, always willing to push the envelope as far as humanly possible, loved to dress in black leather pants and tight low-cut tops.

“Tonight’s a school night,” Carmela joked. She knew that tomorrow morning, come nine o’clock, she had to be primed and ready for the onslaught of customers that would pour into her shop. Most would be frantic to grab reams of paper, rubber stamps, and rolls of purple and green ribbon. All the better to create Mardi Gras menus, party place settings, and scrapbook pages.

Carmela stood on tippy-toe and tried to peer over the heads of the costumed crazies. “Where?” Sugar Joe Panola was the best friend of her ex-husband, Shamus Meechum. But where Shamus was a rat fink of the first magnitude, Sugar Joe was actually a pretty decent guy.

Carmela swiveled her head to where Raleigh, one of KBEZ-TV’s camera guys, sat at a portable console. “Let’s watch,” she said. “See how it goes for him.” Maybe see what’s in store for me.

Over the years, Carmela hadn’t enjoyed a particularly warm relationship with Kimber Breeze. Truth be told, whenever they’d had dealings with each other, Kimber had pretty much tried to sandbag her. But Carmela didn’t hold with harboring old hurts and grudges. After all, what good did it do to hang on to them? Nothing, really. Unless, of course, it was a grudge involving an ex-husband. Then it was perfectly legitimate.

Threading their way through the rambunctious crowd, Carmela and Ava eased up to Raleigh and his equipment. Raleigh, who was middle-aged and favored khakis and T-shirts, seemed to have a perpetual hunch from lugging around battery packs, cables, and camera gear. And trailing after Kimber. And listening to her shrill, domineering voice.

“How come you’re not out there with Kimber?” Carmela asked him.

“No room,” said Raleigh, as his fingers worked the dials. “That balcony is a tight squeeze for even two people. So I’ve got one camera locked on Kimber, another one on the parade below, and one running in here.” He waved a hand. “Which means besides being cameraman, I get to play floor director tonight.”

“What does that mean exactly?” asked Carmela.

Raleigh shrugged. “Switching between cameras A, B, and C.”

“And all this feeds directly back to the station?” asked Carmela, indicating the monitors. She found this technical part fascinating, akin to assembling a video scrapbook.

“That’s right,” said Raleigh. His brows beetled and he was suddenly on alert. “Oh hey, here we go.”

Carmela and Ava watched the monitor as Kimber interviewed Sugar Joe. Which, for the preening Kimber, pretty much turned into a flirt fest.

“Maybe she’ll flirt with you,” Ava said to Carmela, then giggled wickedly.

“Maybe she’ll turn tail and walk away,” said Carmela. She wasn’t sure what Kimber’s reaction would be to her. Stamp her foot and refuse to do the interview? Could happen.

On the monitor, Kimber gave Sugar Joe a warm hug. Then, a few seconds later, Sugar Joe came bounding in from the balcony. Sugar Joe was tall with buzz-cut blond hair and a broad, open face. When he saw Carmela and Ava he broke into a grin.

“Carmela!” Sugar Joe cried out. “And Ava!” He spread his arms wide open, the better to hug them. “You ladies look ravishing!” Sugar Joe told every woman within a two-mile radius that she looked ravishing. And he greeted each and every woman with, “Hello, beautiful!” Carmela decided Sugar Joe’s boundless enthusiasm for the fairer sex wasn’t the worst thing in the world.

“You looked mighty handsome on camera, Sugar Joe,” cooed Ava. Ava had a way with the opposite sex, as well.

But Carmela was more interested in the broadcast. Raleigh had switched to the parade feed now, capturing an enormous pirate ship that was gliding by, illuminating the night with thousands of white twinkle lights.

“Now this feed’s going to the station?” she asked Raleigh.

“It’s going there, but not live,” he told her. “It’s being automatically archived for later.”

“But a portion of this broadcast will be live?”

Raleigh glanced at his watch and seemed to tense up. “Oh yeah. In about eight seconds.” He slouched forward and spoke into his microphone, “Okay, Kimber, time to cut in for station ID.” He paused while he twiddled a dial on his console. “Kimber?” he said again. “Better be on your toes, girl, because I’m coming to you live in five.” Raleigh stole another quick glance at his watch, then began his countdown: “Five, four, three, two . . .”

But when Kimber’s monitor came on, no one was there.

“Crap!” whooped Raleigh. He frantically keyed her microphone. “Kimber,” he hissed, “you’re on!”

A blank screen. Still no Kimber.

Suddenly a blur of motion flashed across the screen, and then Kimber’s face was pressed tightly against the camera’s lens in a grotesque grimace.

“What?” cried Raleigh. He jerked back. “Oh man, now the lights went out! Jeez Louise, I gotta switch my feed!” His fingers quickly pushed buttons, cutting over to the parade that was lumbering by below them.

Was Kimber just goofing off? Carmela wondered. Was she being a pill and trying to rattle poor Raleigh?

But something didn’t sit right with Carmela. From her perspective, Kimber had looked . . . terrified. “No, put the balcony feed up on the other monitor!” she cried to Raleigh. “Something’s wrong!”

He shook his head. “Can’t. The klieg’s down. No light out there.”

Carmela stood motionless for one more second, knowing it wasn’t her place to interfere. Then she quickly reconsidered and pushed her way through the impervious, partying crowd and out onto the balcony.

Arriving slightly breathless on the little half-circle balcony that hung out over the street, Carmela stopped dead in her tracks. Bizarrely, Kimber was nowhere to be found.

Huh? Where on earth did she disappear to?

Carmela blinked and glanced around again.

She saw only two cameras, locked in place, their dark lenses and all-seeing red eyes staring indifferently at her.

As Carmela fought to figure out what strange trick had just been played, shrill screams echoed from the street below. Startled now, she turned and glanced down. An enormous pink-and-gold dragon float was rolling by, the dragon’s ten-foot-wide gaping mouth spewing smoke and shooting sparks, while an enormous tail wagged back and forth across the entire width of the street. Perched high atop the dragon’s spiky back were at least forty white-robed krewe members tossing strands of silver beads to the screaming, deliriously happy crowd.

But still the screams persisted. And now the crowd wasn’t just crying out for beads! Now, horrified faces were upturned.

Puzzled, Carmela glanced down and saw a fat black cord snaked tightly over the balcony railing.

Her heart did a slow-motion flip-flop. Then, with a feeling of dread and a swirl of vertigo, Carmela leaned farther out over the narrow wrought-iron balcony and gazed straight down.

That was when Carmela saw Kimber’s lifeless body dangling ten feet below her and gasped in horror. Kimber’s face was a massive purple clot. One slender high heel hung from her foot; the other foot was completely bare. Then a spotlight from the dragon float suddenly angled its bright light upward, revealing Kimber’s twisting body. And Carmela’s scream rose in a frantic plea, mingled with hysterical shrieks from the crowd below.