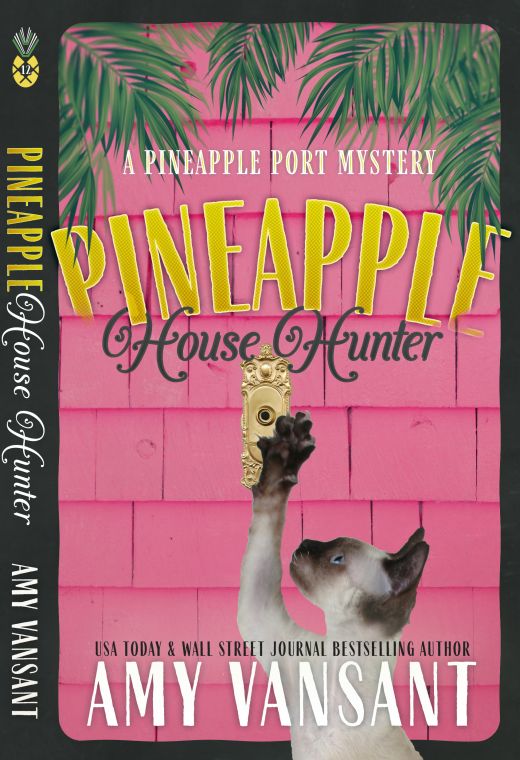 Pineapple Port Mysteries by Wall Street Journal and USA Today bestselling author Amy Vansant, is a funny, clean, and gore-free small-town, female amateur sleuth series, but with all the pulse-pounding excitement of a detective thriller.

When Declan and his uncle Seamus find a dead woman in the master closet of a house for sale, Seamus hopes that means he'll get a deal...but private detective Charlotte Morgan is more interested in why the body has a note pinned to its chest:

Where are you going to keep YOUR clothes?

When another body with a second note is found at a listing held by the same real estate agency, Charlotte is hired to find out who's trying to ruin them. The handsome owner of the agency has a way with the ladies... is one of his jilted lovers out to demonstrate just how angry a woman scorned can get?

Too bad Charlotte's neighborhood "moms," Mariska and Darla, can't help with this mystery --- they're on a treasure hunt bound to cost them their weekend... and maybe their life!

FEATURES BONUS SECRETS FOR YOU TO FIND! Spot the house show clichés!

"I do really love a cozy mystery, and Vansant is one of the best!" -- Amazon Reader

If you love funny mysteries that keep you up at night guessing, you'll love Pineapple Port!

Leslie jumped at the sound of rapping on the car’s window beside her head. She pushed a button to lower it.

“You scared me,” she said, placing her hand on her chest. She forced a good-natured smile, but felt sure it did little to mask her annoyance. Something didn’t feel right, but she didn’t want to let on.

“Can you come look at this with me?” asked the real estate agent standing outside her door.

Leslie cursed her luck. She hadn’t felt the car wobbling. Granted, she wasn’t driving and maybe the wheel was pulling to one side, but couldn’t they just limp home?

“I could use another set of eyes,” added the agent.

Leslie glared down the dirt road ahead of them. “We shouldn’t even be here. Where is this place? We’re too far in the boondocks. We should turn around—”

“First, we have to do something about this tire.”

Leslie huffed, exited the car and allowed herself to be led to the back of the vehicle. “Can’t you just call a service? I think I can call mine—” She fumbled in her purse, looking for her phone, stopping as her eyes settled on the rear tire.

“That doesn’t even look vaguely flat,” she said, squatting down to squint at the tire. “It looks fine to me—”

She straightened to find a small gun pointed at her face. The trickle of relief she’d felt upon eyeing the intact tire dissipated beneath a wave of terror. Her hands shot toward the heavens as if she could escape skyward.

I knew there was something wrong with—

The gun cocked and Leslie sucked in a breath. She hadn’t thought for a moment her life might really be in danger. It was all too surreal...

The killer fell back against the wall, panting, sweating with the strain of dragging the body from the trunk into the empty house. The dead woman had almost found a permanent home in the living room, but in the end, made it to the master bedroom walk-in closet where she belonged.

How can such a small body weigh so much?

Leslie and her tiny frame had been the perfect target, until it turned out she secretly weighed two thousand pounds.

I only put one bullet in her. She feels like she’s full of lead.

The killer slid a note from a pocket and arranged it on Leslie’s chest, securing it with a pin to be sure it wouldn’t slide off.

Stepping back to admire the position of the body, the killer frowned at the note.

Is it too much?

No. The calling card was good, but it could have been better. Something more crazy, so the cops knew they had a real weirdo on their hands.

I’ll have to think about it.

There’d been something on television about the police identifying a killer by the printer he used to print out threatening notes. Granted, it had been an old dot matrix model, but maybe making notes at home was a bad idea.

I’ll get better at this.

Seamus eyed the outdated, beige-tiled kitchen, his lips twisting into a tight knot.

“I have a bigger kitchen than this back at my apartment,” he said, his tone dripping with disappointment.

Declan’s shoulders lowered. Every time his uncle made a comment, he felt more like a balloon with a slow leak. He side-eyed his uncle.

“A piece of granite, and this will feel like a new kitchen,” said Janey DeLeon, Seamus’ real estate agent, hovering behind them like an annoying shadow. She sounded perkier than anyone ever should about countertops. She’d been giddy about engineered hardwoods and exuberant over south-facing back yards. Declan was starting to feel as if he had a crazy parrot on his shoulder, squawking upbeat real estate clichés in his ear every time something less than perfect popped into view—which was almost every other second, according to Seamus.

His uncle—the man he’d often found asleep on his sofa, tucked in a nest of crumbs, used tissues and empty beer cans—was suddenly a princess laying on a tower of mattresses chock full of peas.

Seamus clucked his tongue and moved down the hall toward the bedrooms. Declan followed, punching him lightly on the shoulder blade with his balled fist. “Stop being such a prima donna and make up your mind.”

Seamus poked his head into an outdated powder room and grunted his disapproval. “Buying a house isn’t like buying a can of beans, boyo.”

“Countertops aren’t as expensive as you think,” chirped Janey from somewhere behind them. The Saccharine Shadow had tailed them down the hall, obsessing over granite and quartz. “You could go butcher-block. They’re cheaper than stone and coming back in vogue.”

Seamus grimaced at the guest bedroom, his eyes lifting to the nautical-themed wallpaper border near the ceiling. “That’s gotta go.”

Declan rubbed the bridge of his nose with pinched fingers.

You’ve got to go.

This was the fifth house they’d visited and Declan didn’t see the search ending any time soon. It had felt like paradise when Seamus moved out of his house and into the apartment above The Anne Bonny, his uncle’s new bar.

Seamus’ toilet over-flowed and the professional leech had returned like the world’s most irritating boomerang—eating his food, using his paper goods, and coming home late singing Irish songs at the top of his lungs.

He shouldn’t have let Seamus back for a second, but the bastard slipped in, seeking safe port during a hurricane. The hurricane passed and Seamus remained, like an ugly high-water stain on the wall.

Declan felt like a genius after finally convincing him to get a house of his own, but now he suspected the Irish imp had no intention of moving. Dragging his nephew through Florida ranchers was for show, to wear him down until a permanent roommate seemed like a fantastic idea.

Declan leaned against the light purple hallway wall, rested his head back and closed his eyes. He should have known this house wouldn’t win his uncle’s heart as soon as he saw the Easter-egg-themed paint. If that wasn’t bad enough, the place smelled funny. He’d caught the first whiff of something off in the kitchen, and it only grew worse the farther they moved down the hallway.

“So, this the guest room?” asked Seamus, sounding like a kid who’d received socks for Christmas.

“It’s a room,” said Declan. “Four walls and a ceiling. You don’t have to keep the furniture.”

“Look at the wallpaper. Do you know how hard it is to remove that stuff?”

“If you buy the place I’ll remove it, personally. And why do you care? Your current apartment looks like the place every kidnapper uses to keep their victim.”

“That’s the point. I need the space above the bar for storage. It can’t double as my apartment.”

“The point is you were fine living in squalor for weeks. Now, all of a sudden, a little wallpaper sends you running?”

Seamus thrust his hands in his pockets. “You should have seen the look on Snookie’s face—”

Hearing the name of Seamus’ last lady-friend, Declan raised a hand. “Oh. I get it now. You don’t want your dates thinking you’ll spend the next month asking them to put the lotion on its skin.”

Seamus scowled at him. “What?”

“Silence of the Lambs.”

“Silence of the what?”

Declan resolved to take their exchange as a sliver of hope. Bringing dates to his nephew’s house wasn’t the way to dazzle them, either.

Maybe he really does want to move out...

Seamus’ lip curled. “Do you smell something?”

But maybe not to this place.

Seamus entered the room at the end of the hall and made a hard left to poke his head in the master bath.

“It’s just you. It’s a perfect size,” said Declan, though as he shifted toward what he assumed to be the bedroom closet, the stench nearly took his breath away.

“I think something died in the closet,” he said, wincing.

Declan had a passing thought.

Maybe he finally found something he likes. It stinks, but maybe—

“Nice closet?” he asked, but his hand raised to cover his nose as the reek from the closet hit him like a wall.

“It’s a little crowded.” Seamus looked at him with a strange droll expression.

“Oh no, what is that smell?” asked Janey from her place by the bedroom door.

Declan leaned forward to peer inside the closet.

Slumped in the corner sat a dead woman, her eyes wide and glassy, mouth gaping, a bullet hole in the center of her forehead.

A white piece of paper with a printed message in giant black font, hung pinned to her shirt:

Where are you going to keep YOUR clothes?

Seamus poked Declan in the ribs with his elbow.

“Hey, I might be able to get this place for a song.”