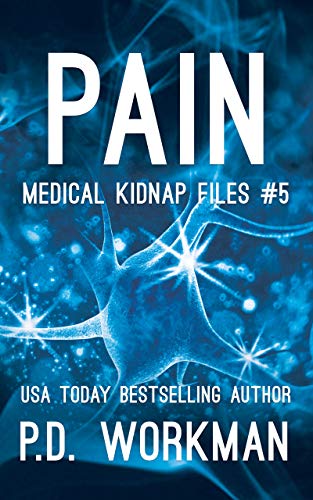 When your child is in pain, everything else takes a backseat.

Fae Glover has put everything else on hold while she tries to help her daughter to get a diagnosis and effective treatment. Unfortunately, DFS has other ideas and in short order has apprehended Hannah. And they have no intention of ever giving her back.

Gabriel and Renata are in a race against the clock to keep the family together and reunite Hannah with her mother before the court severs all of Fae's rights permanently.

Hannah curled up into herself, arms wrapped around her middle, knees up to her nose, the pain taking over her body. It started in her stomach and spread outward until her whole body was racked with pain. She couldn’t stand the covers pulled over her or the air moving in the room. Every sensory input hurt from head to toes.

She held her breath for as long as she could, hoping to make herself pass out. But eventually, her lungs and diaphragm insisted that she had to breathe, and she took a deep gasp of air that sent more pain blasting through her.

How could air hurt?

Tears coursed down Hannah’s face. She sniffled and shuddered, unable to find a breathing rhythm that didn’t hurt. She wanted to change her position, but she couldn’t unclench her body.

Tess moaned and rolled over in her bed. Hannah tried to call out to her.

“Tess. Tessa… please…” Her voice was tiny and she knew there was no chance of waking Tess up. When Hannah was assigned to wake everyone up in the morning, Tess was the hardest to get out of bed. Not just because she was stubborn. She slept like the dead.

“Tess. Wake up.” Hannah tried to be louder, but her voice was barely a whisper.

Tess rolled over again. Then she propped herself up on her elbow, looking in Hannah’s direction in the dark.

Tess didn’t move right away. She stared in Hannah’s direction as if she weren’t sure what to do. It wasn’t like it was the first night that Hannah had the pain. And they both knew that there was nothing Fae Glover could do about it. Hannah should just go back to sleep and let Fae sleep so that she could get to work in the morning.

Hannah continued to cry. Eventually, Tess swung her legs over the edge of the bed and padded across the cold floor to the door. Hannah could hear everything, every creak of the house, every time Tess took a step with her bare toes. Tess’s knock on Fae’s bedroom door.

“What? Tess?” Fae’s voice was heavy with sleep. Hannah felt guilty waking her up, but she needed her mother at her side. She couldn’t just go back to sleep.

It didn’t take Fae long to rouse. She was used to having to get up in the night to take care of sick children. She was a mother. She entered Hannah’s room and went to her bed.

Hannah couldn’t speak. It just hurt too much. She had used up all of her energy in waking Tess up. She just sobbed in response to Fae’s query.

“Oh, baby,” Fae said softly. She sat down on the edge of Hannah’s bed.

The mattress depressed under her weight and the whole bed rocked, making Hannah shift position and try to brace herself from rolling into Fae. She cried out with the pain that sliced through her belly like someone had kicked her in the gut. She didn’t know how she was supposed to stand it. How could anyone live through anything that hurt so much? Every time it happened, she was sure they would figure it out this time. The doctors would find some cancer eating away at her internal organs, or a hole in her stomach, something that would explain the incomprehensible pain. And then maybe they’d be able to fix it. Or maybe they would just be able to tell her in hushed tones how much longer she had to deal with it.

You only have three weeks to live, and then it will all be over. The pain will be gone.

“Mommy,” Hannah cried. She sounded like a baby instead of a grown-up twelve-year-old, but she didn’t care.

Fae stroked her head. Her broad fingers caressed Hannah’s even cornrows, bumping up and down across them. It hurt. Everything hurt.

Hannah didn’t want a song. She wanted something to take away the excruciating pain. She didn’t answer, and Fae began to sing.

She didn’t have a great voice. It wasn’t a singing voice that made people stop and take notice, their hearts soaring with wonder. It was just a mom voice. The same voice that had spoken to Hannah from the time she was conceived. She knew it from her mother’s womb, from the cradle, ever since she could remember being sick or sad. Fae sang a lullaby that she had sung to Hannah when she’d been sick with strep throat. When she smashed her finger in the car door. When Hannah was sad about Tess starting school, leaving Hannah the only one still too young to go to school.

But it didn’t take the pain away.

It didn’t make the rigid muscles relax so that Hannah could go to sleep and have pleasant dreams.

It made no difference at all. It was just one more thing that irritated her and made the pain grow, just like Fae’s strong hands with their blunt fingers stroking her hair and rubbing a circle on her back.

Fae withdrew her hand. “I’m sorry, baby. It will go away, honey. It won’t last forever.”

“I need to go to the hospital.”

Fae sighed. Hannah knew she didn’t want to. She wouldn’t be able to go to work the next day if she had to stay with Hannah at the hospital all night. And like every other time, the doctors would say that there was nothing physically wrong with Hannah. The pain was just in her head.

“Can’t you rest here?” Fae asked. “They’ll just send you home tomorrow anyway. Isn’t it better to just be in your own bed? You know how much it hurts to drive.”

Hannah sobbed, unable to catch her breath. She knew she was on the edge of hyperventilating. Her heart beat too fast and hard. It hurt with every thump.

Hannah tried to keep the panicked sobs under control. But she felt like she was having a heart attack. She’d seen people have heart attacks on TV, and her pain was far worse than the middle-aged white men who clutched at their chests and fell dramatically to the ground. She wished that she could just have that one little pain and it would all be done. The men on TV never suffered as she did.

She awaited the day when she would just collapse and the light would go out of her and she wouldn’t have to deal with the pain anymore.

She could hear Fae getting dressed, picking up her keys and her handbag, and going across the hall to the boys’ room to wake up Trevon and explain that she was taking Hannah to the hospital. Hannah didn’t know why she even bothered. Why not just let Trevon sleep? He would know what had happened when he woke up in the morning and Hannah and Fae were not there.

But Fae woke him up and explained it to him and turned on his alarm so that Trevon would wake up in time to get everyone ready for school.

Then, finally, she returned to Hannah’s room.

Fae knew there was no point in trying to get Hannah dressed. It would hurt too much, and then at the hospital they would just have to undress her again to get her into a hospital johnny so that the doctors and nurses could examine her and tell her that there was nothing wrong.

Fae slid her arms under Hannah’s back and behind her knees and hefted her up. Hannah cried out with the jolt of pain.

She was too heavy for Fae and knew she should walk to the car under her own power, but she couldn’t. If she tried, she would just collapse and Fae would end up having to carry her or to call an ambulance. And an ambulance ride was expensive. A trip to the emergency room was more than they could afford as it was. They had accumulated all kinds of hospital bills that Fae could not pay, but the hospital couldn’t turn them away. Not when Hannah was in a crisis. They had to treat her, even if they couldn’t pay.

Hannah clung to her mother, not wanting to be dropped, wishing it would ease Fae’s burden even though she knew logically that holding more tightly wouldn’t make Hannah any lighter. She sobbed into Fae’s neck, smelling her sweat and deodorant, the sleepy scent of her.

Fae was staggering by the time they got to the car. She put Hannah down on the freezing cold pavement in her bare feet to unlock the door, and Hannah slid into the seat. Her feet burned as she swung them into the car and pushed them into the gravelly floor mat to try to warm them up again.

Fae went around to the driver’s side and got in. She looked at Hannah as she slid the key into the ignition. “Are you sure? Are you going to be okay with me driving?”

It was the only way she was going to get to the hospital. Even if they called for help, she would still need to ride in the ambulance, and that was much worse than the car. The ambulances rocked and seemed to have no suspension. Hannah would be clinging to the gurney and screaming in agony by the time they reached the hospital.

Hannah gave her mother a quick nod. She folded her body over her arms, hunching down under the dash to try to shrink the pain.

“You can’t drive like that,” Fae admonished. “You need to sit up, and you need to wear your seatbelt.”

But Fae didn’t put the car into gear. She waited for Hannah to listen and obey. Hannah sobbed wildly, but Fae wouldn’t relent. Eventually, Hannah managed to force herself back up into a proper sitting position. Fae reached across her to grab the seatbelt. She pulled it across and buckled it.

Then they were on their way to the hospital.