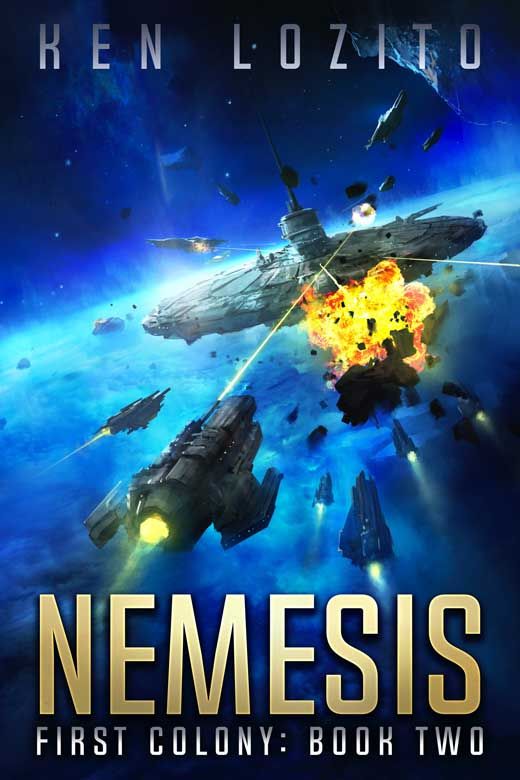 Earth is lost.Seven years ago the New Earth colony received one final message from Earth…a warning. First, a global pandemic, then the emergence of a new species. A war for survival ravaged the Sol system. Now they are coming for the colony.Many colonists don’t believe it, but Connor does. They must prepare. They must fight. But how can they survive something that killed every person back on Earth? 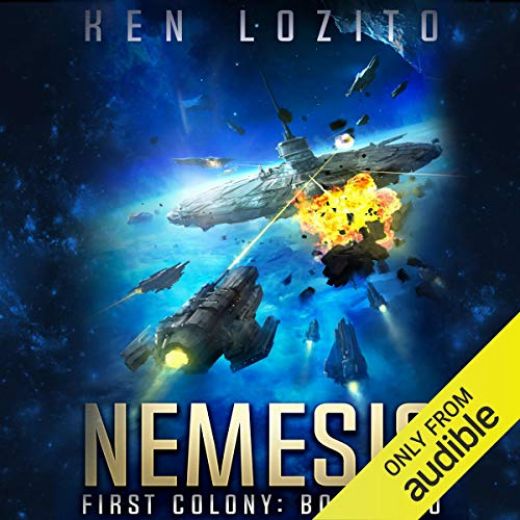 General Connor Gates leaned against the railing on the observation deck of the Montgomery III construction platform and watched the spectacle unfolding before him with flinty eyes. Clutched within the platform’s massive robotic arms was the last major section of the Ark, the interstellar ship that brought the three hundred thousand colonists living on New Earth to this star system. Bright flashes of light ignited along the partially finished hull of the Colonial Defense Force’s first battleship carrier.

Connor arched an eyebrow at Wil Reisman. The man was part of the original Ghost Platoon that Connor had commanded before being “volunteered” into the Ark program. At Connor’s age, being drugged, stuck in a stasis pod, and then snuck aboard Earth’s first interstellar colony ship couldn’t exactly be called a kidnapping; “shanghaied” was the nautical term for what happened to Connor and the surviving members of Ghost Platoon. Though it had been seven years since he’d come out of stasis only to learn that he was now part of the colony, it was still sometimes a bitter pill to swallow. But the actions of Admiral Mitch Wilkinson had ultimately been for their benefit. If he hadn’t done what he’d done, it was likely that he and his old platoon would have rotted in a military prison—that is, until they perished when all the people back home mysteriously died.

“We’re a year behind schedule for this ship,” Connor said.

“Priorities,” Reisman said. “Titan Space Station came first and is our first line of defense against an attack force.”

Connor speared a look at his friend.

“Kasey advised that I was to remind you of the obvious things from time to time,” Reisman said.

Connor remembered when Reisman had been just a fresh-faced intelligence officer. His talent for intelligence gathering had made him a valuable asset back then, and now, with the Colonial Defense Force being so small, former Ghosts were nearly irreplaceable. They were among the few who had actual combat experience in the new colony.

A chime sounded from the nearby speakers. “General Gates, please report to the hangar bay for immediate departure,” the monotone voice of the computer systems said.

They left the observation deck and started making their way to the hangar bay, where Connor’s shuttle waited for him.

“You wouldn’t think it would take a congressional hearing to get resources for the defense of the colony,” Connor said.

Reisman shrugged. “Gone are the days of big budgets and a unified effort for a common purpose.”

Connor snorted. “Budgets—as if money had anything to do with it.”

“Allocation of resources then. There’s only so much to go around.”

“I guess I should feel lucky that Titan Space Station is at least mostly completed. Now, if we only had enough power stations to operate all the weapons systems at the same time,” Connor said dryly.

Reisman pressed his lips together and shrugged, unable to think up a reply.

The new governor, Stanton Parish, wasn’t their staunchest supporter these days. When they’d first put the CDF together, Connor had the backing of most colonists, but as more people were brought out of stasis over the years, support had begun to wane. Now it was an almost endless debate to get the resources they needed to finish the defense initiatives they’d already begun.

They entered the hangar bay, and Connor shoved the inner doors open. Thinking about meeting with Governor Parish was enough to ruin his mood.

There were fewer than a hundred people stationed on the platform, along with a fleet of robotic workers. Work on the final piece of the Ark had only just resumed after the project had been put on hold due to resource constraints.

They crossed the hangar bay to the dull gray shuttle with a golden sunburst painted on the side, the CDF emblem now faded from extensive use. They walked up the loading ramp and entered the transport. Connor’s protective detail was waiting for him.

Sean Quinn stuck his head out from the cockpit. “We’re cleared to leave.”

“Okay, let’s get going then,” Connor said and sat down near a window. He’d rather be meeting with Tobias Quinn, Sean’s father, who had been governor of the colony until the election last year. At least Tobias had given much more than provisional support to the CDF.

One of the perks that came with Connor’s rank was that he rarely had to fly himself anywhere. But the thing was, he missed flying. Reisman sat next to him, opened up his PDA, and brought up Connor’s schedule.

Connor glanced at the screen. “I’ll be right back.”

He climbed to his feet and headed for the cockpit, where he opened the door. There were two seats in front of the instrument control panel and an empty seat off to the side.

“Is this seat taken?” Connor asked and sat down.

The copilot swung his gaze back to his station. “Cleared for takeoff, sir.”

“Acknowledged,” Sean said and informed the flight officer that they were ready for launch.

The shuttle lifted off, and the landing gear withdrew into the hull. Connor watched as Sean swung the nose about and took them out of the hangar.

“But, sir, we’re already pressed to reach Sierra in time.”

Connor looked at the copilot, and his identification appeared on his internal HUD—Lieutenant Anthony Frook, pilot assigned to the protector’s division of the Colonial Defense Force.

Making the congressional committee wait wouldn’t increase his chances of getting what he needed, but Connor knew that even if he was on time he was unlikely to get what he needed.

Sean updated their heading and brought the construction site into view. Since they were using part of the Ark for the battleship carrier’s construction, the interior was already mostly laid out. There were some adjustments to the design that needed to happen to make her a military ship, but it was much quicker than starting from scratch.

“She’s coming along. Looks like they’ve already got some of the heavy cannons installed,” Sean said.

Connor glanced up and, indeed, saw the cannons. “Impressive looking but not worth anything without the ammunition tracks to arm the thing or the depot ready to even store the ammunition. I would much rather have had the missile tubes finished than the rail-cannons installed.”

Sierra was the capital city of the colony on New Earth. Thinking of the colony led Connor to reflect on the humble beginnings of the compound that had been there before. As Sean changed the shuttle’s course and started heading toward the planet, the light from the sun illuminated the planetary rings that surrounded New Earth. Connor had long gotten used to seeing them, but they were still a stunningly brilliant display as well as a reminder that no matter what they called this planet, it was a very different place than what they’d left back home.

“Sir, we’re being hailed from the Vigilant,” Sean said.

Connor turned toward the main heads-up display. “Put him through.”

Captain Ian Howe appeared on screen. “General, I wanted to let you know that we’ll be ready for departure tomorrow. Captain Benson of the cargo ship is waiting for final approval to depart.”

“I delayed approval in hopes that there would be some extra things to be added to his manifest,” Connor replied.

Howe nodded. “That’s what I told him. CDF destroyers Banshee and Wyatt are on standby for escort duty.”

“This is the fun part,” Connor said.

Sean glanced at Connor but didn’t say anything.

“Since you have the extra time, make sure the Vigilant is fully stocked,” Connor said.

Sean checked the shuttle’s approach to the planet. “Nothing, sir. I was just remembering when I first heard you say those words. The fun part, I mean.”

Connor nodded. Sean had been in the first class for Search and Rescue before he transferred to the CDF. He now led his own platoon, which was currently assigned directly to Connor.

“Then I’m sure you can guess what comes next,” Connor said.

“Wouldn’t be good at my job if I couldn’t at least anticipate your orders, sir,” Sean said.

Connor left the cockpit and returned to his seat. They were still another forty minutes out. To the casual onlooker, it appeared that Connor was taking a nap, but what he was really doing was using his implants to check that the plans he’d set up were in motion. Since there were so few people in the Colonial Defense Force with actual military experience, Connor went to great lengths to ensure that drills were as realistic as possible. He knew that all the training in the world could only go so far until a soldier was in the thick of it, but he aimed to get their soldiers as ready for action as he could. If that meant an excessive amount of training and mock execution of tactics, then so be it.