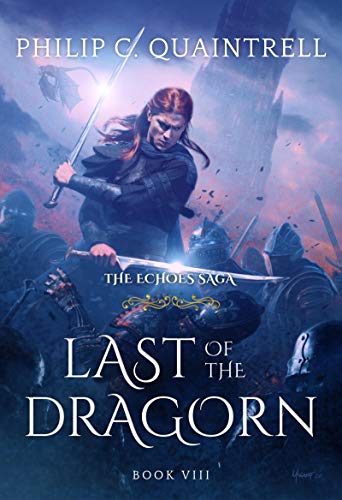 Last of the Dragorn

THERE IS NO WAR. THERE IS ONLY REBELLION.

Alijah's reign sweeps from Erador to Ayda. Those who would stand against the king are few, their numbers cast across too many battlefields. Does hope lie in the east? Can the elves turn the tide and keep The Rebellion alive?

The weight of Dhenaheim now rests on Doran's shoulders. Chained and imprisoned, the clans are shattered and spread across the realm. On the island of Qamnaran, they build to the heavens. In The Moonlit Plains, they dig down into the dark. Only the Heavybellys have the mettle to do what must be done.

Astride the mighty Athis, Inara Galfrey fights for The Rebellion as both sword and shield. With blood and sweat she has kept Alijah's forces at bay, but Inara knows there is only one way to defeat her brother. Following this path, however, will take her far from the front lines and into lands long forgotten.

After ten thousand years, the future that was foretold looms near. But Fate has one last hand to deal...

LAST OF THE DRAGORN IS THE PENULTIMATE CHAPTER IN THIS UNMISSABLE EPIC FANTASY SERIES.