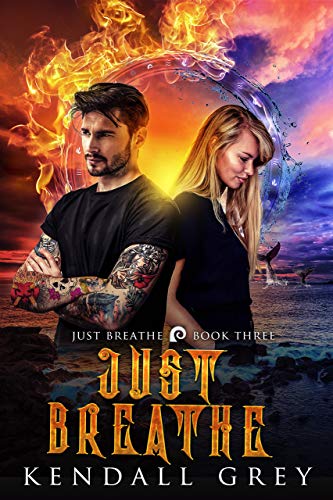 "Kendall Grey has taken my breath away once again ... Just Breathe surpassed my expectations with its brutal harshness and beautiful passion rolled into a story of love, magic, and whales." --Annie, Booked and Loaded

After betrayal rocks the foundation of their relationship, Australian Sentinel Gavin Cassidy and whale biologist Zoe Morgan call it quits. Gavin can't forgive himself for shattering her trust, and being with the sexy rock star is killing Zoe. Literally.

But there's no time to talk it out. Gavin and the other Sentinels must find the door into the Dreaming and defeat the supernatural Fire Elementals--starting with Scarlet, the woman who set fire to his relationship with Zoe--before millions of humans are killed. Meanwhile Zoe, hoping to take her mind off her heartbreak, tries to focus on work, only to discover that her whales know more than she expected.

Love and duty are powerful motivators, and alliances are formed in the most unlikely places in this final installment of the Just Breathe trilogy.

Randy Heller leaned over the side of the bobbing Zodiac and passed Zoe Morgan two large syringes. “Are you sure you can handle this?”

“Yeah.” Zoe squinted into the blazing sun, focused on the currents caressing her as she treaded water, and nodded with grim acceptance. This was the worst task she’d ever been faced with, but she didn’t have much of a choice. Any time one of the veterinarians—or anyone else, for that matter—got close to the emaciated baby humpback whale just outside of Sydney Harbour, the calf bucked like a wild bull. Zoe was the only one he’d let near him.

The blessing and curse of being able to speak to whales.

“Be careful with those.”

Randy didn’t have to remind her the syringes carried enough poison to end an entire family line, plus a few neighbors for good measure. Though after what she’d been through this week, dying again might not be such a bad thing. Her thoughts wandered to Gavin, but she shrugged them off into the cool ocean cradling her. She had to be strong and focused, and he complicated everything.

Too bad Scarlet wasn’t here so Zoe could introduce her to the Pentobarbital and T-61 in her hands. But that would have been letting the Fyre Elemental off easy. No, Scarlet deserved a much more violent end for slaughtering this poor baby’s mother and leaving him to die of starvation.

And there was that whole business of Scarlet shape-shifting into Zoe’s form, sleeping with Gavin, and tricking him into accidentally killing the real Zoe.

She closed her eyes for two long breaths.

Dwelling on the incident would only bring more Fire, something she didn’t need while an innocent life waited to be ended by her hand. Nope, she’d stick with the sadness, the emotional pain that came with Water. For the time being, it was all she had.

Kicking her fins to stay afloat, Zoe absorbed the motion of the gentle currents darting across her wet suit. She carefully rubber-banded the capped and loaded syringes around her upper arm where they’d be out of the way until she needed them.

Randy stared down at her, lips tight, his gray locks dancing in the humid breeze. “Zoe, that calf may be small and dying, but he could take you out with a flick of his flukes. Administer the injections and come straight back here. Understand?”

“Yep.” She turned away before he could coddle her any more and paddled toward the whale. Huffing another deep breath, she fought down a sudden wave of nausea.

Come on, she told herself. There’s no other solution. It sucks, but it’s the only humane option. The baby’s too far-gone.

Still, the ache in her chest grew. She fought to protect whales. It wasn’t supposed to be like this.

She shuttered her eyes for a couple seconds to rein in the tears and reached out to the little whale with her mind. Hello again. It’s Zoe.

The baby barely moved. His breaths were shallow and frequent. Did you find another mother for me? I’m so hungry, Zoe. And cold.

Zoe bit back the panic winding its way up her throat. This wasn’t a time to be selfish or to wallow in sorrow. This was about the whale. She could grieve for him later. Right now, she had to fulfill her role as death dealer.

She swam to him, and the calf’s thin, four-meter-long body listed. He struggled to right himself. Hand raised with her palm open, she spoke aloud, “May I touch you, little one?”

He closed his eye. Yes.

After a pause, she dropped her hand to his black skin and rubbed him gently. We can’t find any milk. The doctors think it may be too late to save you. I understand you’re hungry and hurting. I’m so sorry.

More than he could ever know.

His head lifted a bit, almost like a nod. What will happen to me?

I brought some medicine that will ease your pain. It will send you out of this world and into the Dreaming where no one can hurt you. Your mother will be waiting for you.

How do you know that’s where I’ll go?

Bitter saliva flooded her mouth. A vision of Gavin blasting her with an Elemental Water cannon into the fireplace disrupted the ripples of her swooning mind.

Her own breath choked her.

It was an accident. He didn’t mean to do it.

She shook her head. I died and left this place. I woke up in the Dreaming, where I saw whales like you.

The baby’s eye widened. Did you see my mum?

I may have. I didn’t stay very long. But I’m sure your mum is there. Waiting for you.

Her heart stuttered in her rib cage. A tear bled down her cheek. She’d done a lot of unpleasant things in her life, but nothing came close to this. And so soon after the very real nightmare with Gavin and Scarlet …

I don’t want you to suffer anymore, but I … I can’t do this without your permission. A sob wrangled free of her throat, and she turned away. The baby couldn’t see her fall apart. He’d endured enough stress, and she wanted him to go peacefully. He deserved that.

She pulled in a deep breath and yanked in her freak-out by the reins. Air.

Just a little, but the medicine should work fast, and then you’ll feel no more pain. You’ll be with your mum again. She quickly wiped away a new spring of tears.

The whale studied her for a long moment. What about the bad lady who hurt my mum? What will happen to her?

Cold vengeance crept into Zoe’s body and chilled the sadness raging in her blood. Determination welled and crashed over the slow boiling panic, snuffing it out in a great wave. She sniffled, skidded an arm across her nose, and raised her chin.

“I’m going to make her pay for what she did to you. When you find your mother, I want you to tell her that the Fyre Elemental who killed you both is called Scarlet. Share her name with everyone you meet in the Dreaming. Show them what she did. When the time comes, I’ll need Water to put her and the other Fyres down. Save that Water for me. It’s our most dangerous weapon.”

The whale brushed Zoe’s arm with his flipper and blew weakly. I’ll hold the Water tight and never let it go.

Dear God. In the face of death, this frightened, tiny baby defied his fear. She had to do the same. She threw her arms around the whale. You’re a strong boy. Thank you.

Channeling her anger, agony, and hatred for Scarlet, Zoe cooled the pain with a filling gulp of Air and removed the first syringe. She met the whale’s eye. The bravery behind that grapefruit-sized orb gave her the courage to do the unthinkable.

She pressed her lips together, uncapped the needle, and released the Pentobarbital into his blowhole. Unable to wait, she removed the lethal dose and readied it in her trembling hands.

The calf’s eye closed. Zoe swam to his back end and plunged the T-61 syringe into his tail fluke. He barely even flinched. Her tears flowed with the venom she injected into his frail body.

She stroked the baby’s rubbery black skin and remained by his side, despite Randy’s distant shouts to return to the Zodiac. “Go to your mum now, and find happiness in the Dreaming, little whale.”

Aching from head to toe, she laid her ear against his side and listened to the racing of the great pumping muscle within. Her heart matched its speed.

For one beat, hers did, too.

She lifted her head and blinked away one last tear threatening escape.

The deed was done. No taking it back now.

Zoe Morgan was a whale killer.