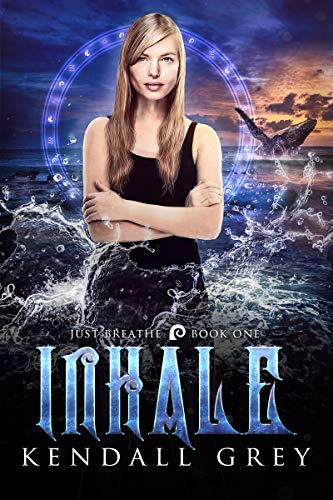 Marine biologist Dr. Zoe Morgan is working her dream job: director of a whale tagging research project. She's in her dream location: the beautiful beaches of Australia. But her sleep is plagued by nightmares—fiery hellscapes, hideous monsters, strange people ... and the gorgeous man who rescues her from them. He might be a figment of her imagination, but he sure feels real.

What Zoe doesn't know is that he's not a fantasy. He's a Sentinel charged with protecting humans from Fire Elementals, using his own blend of elemental magic. In the Dreaming, anyway. In the real world, he's Gavin Cassidy, a sexy rock star who indulges in all the excesses that money and fame can buy. Gavin hasn't been summoned to help anyone since his partner's death, and he likes it that way—until he meets Zoe in her dreams. With Zoe, it's impossible to stay detached, impossible to say no.

But Dr. Morgan is more than just his muse—she's the key to restoring order in the Dreaming. Gavin never believed he could fall for someone like Zoe, nor does he realize he may have to sacrifice the woman he loves to save his country.

“Inhale is saturated with love, loss and sex. It's saturated with colors and beauty, with good and evil. It's a richly told tale that rewards the patient reader and I would recommend it to anyone who wants to soak up something a little different.” —Karina Halle, New York Times bestselling author

“[I] enjoyed this steamy paranormal fantasy romance! Multilayered with likable characters and great chemistry, Inhale is not my usual genre but it pulled me in for a lap around the Dreaming. Looking forward to the next in the series!” —Toby Neal, USA Today bestselling author

“A unique paranormal lore with a touch of fantasy, the plot in Inhale is constantly on the move. ... If you're serious about Urban Fantasy novels that kick butt—I highly recommend this one!” —Giselle, Xpresso Reads

She would not let go.

Forty tons of pissed off humpback whale thrashed under Dr. Zoe Morgan’s bloodied fingers as she tugged at the inch-thick fishing line flaying its skin. Leaning out of the rocking Zodiac, she braced her left knee against the inside of the boat’s bumper. A wave crashed over the bow, spraying her eyes with saltwater. She squeezed her lids shut and spit out a mouthful of brine.

Her right shoe’s rubber sole squealed when it lost traction, and she lurched forward. Fancy footwork helped her avoid an unscheduled meet-and-greet with the Atlantic Ocean, but she wouldn’t last much longer. Teeth clenched, she pulled the rope with every ounce of strength and prayed her shaking legs would keep her balanced amidst the tug-of-war between the waves and the whale.

The fishing line proved to be as stubborn as she was.

The whale’s shiny black rostrum broke the ocean’s surface, scattering waltzing yellow rays of sunlight across the white-capped depths. The animal rattled out an exhale, the combination blast of a hundred-mile-an-hour whoosh! and the aroma of eau de fish. Sea spray mingled with lingering droplets of condensed breath and slapped Zoe’s cheeks.

She eased up on the line a bit to give them both a rest. The whale must have been petrified. She knew how he felt.

“Did you get him free?” Adriene’s strained voice called out behind her. Over the roar of the swelling sea, it was hard to tell whether she was scared or angry.

“No.” Zoe wiped her salt-encrusted face against a cold, soaked shoulder. The rope hadn’t budged, despite the deep nick she’d sliced into it. Still losing the game of disentanglement tag she’d been playing with the whale for two days, her limbs ached so much, she could barely move. She and Adriene had done everything they could—attached a transmitter to keep track of the humpback, kegged him with buoys to slow him down, whittled away at the gillnet one cut at a time, fought the invincible sea and wind …

All it had gotten them was cold, wet, and exhausted.

But the whale was much worse off. He’d first been spotted trailing fishing gear in June, but judging by the depth of the rope cuts in his rubbery skin, he’d been pulling the line for several months. The oozing white sores indicated infection had settled in. The knobby, visible backbone suggested he hadn’t eaten all summer. If she didn’t free the whale here and now, there might not be another chance.

Nope. She wouldn’t let go. Not when a whale’s life hung in the balance.

This would not be a repeat of what happened in Antarctica.

Though two years had passed since that life-changing trip to the Southern Ocean, crystal-clear memories of the whalers who murdered Lily’s newborn calf continued to haunt her. The harpoon anchored in its side as it floundered in agony. Thick red water. Lily’s heart-wrenching calls to the baby that wouldn’t answer.

Zoe had been powerless.

But she wasn’t now.

Her head spun. White fog tinged her sight. The sharp tang of ocean stabbed her olfactory nerve, triggering an unscheduled shifting of contents in her stomach.

She swallowed hard. Jesus, this was so not the time or place for a panic attack.

Deep breaths. In and out.

Zoe shook her head. “No way. I’m not leaving him. Rather die.”

She wound the slack of the bright blue rope around her hand and turned to her best friend. Adriene’s chocolate brown skin glittered under the waking sun as if enchanted by a magical spell. Though she’d turned the motor off, her friend kept a death grip on the outboard’s steering handle.

Adriene pursed her lips, then threw a hand out to steady herself as another wave threatened to capsize the tiny Zodiac. She ass-planted on the boat’s rubber bottom and cursed. “You wanna die for a whale, fine. But don’t drag me down with you. I’m your beneficiary, right? Who’s gonna get all that insurance money if we both end up as fish food? I’ll tell you who. The gov’ment.”

Zoe’s teeth chattered. “Hate to tell you, sweetheart, but the whales get what little there is. You’re SOL.” She sucked in another full breath and let it out slowly.

Adriene hissed, stuffed both hands under her armpits, and poked out her bottom lip. “Well, ain’t that the shit.”

Another wave, angrier and taller than the last, crashed the bow. Gasping, Zoe clutched the rope to her chest. The whale tugged back.

Please hold on. Just a little while longer.

Her gloves were shredded. Salt bit into her torn, rope-burned fingers, and bruises mapped dark continents across her tanned forearms. Tears threatened rain, but the clouds in her eyes weren’t ready to give in yet. She faced the wakening yellow horizon, the sun warm on her face despite the frigid air. “I can’t let him go. Please, Adriene.”

“We’re gonna have a long talk when this is over.” Adriene restarted the motor. “It’s not like CRN offers hazard pay for this kinda shit. And more importantly, I can’t sit back and watch you destroy yourself over something you had no control over.”

Adriene piloted the Cetacean Research Network’s Zodiac parallel to the animal’s massive black back, then dropped the engine into neutral. Zoe didn’t need to turn around to know Adriene wasn’t happy. But it was okay. She’d smooth things over with her friend later.

The whale blew from about three meters away. At least he’d stopped lobtailing. His breathing intervals were shortening. The boat’s close proximity was probably stressing him out.

“Pass me the knife again.” Zoe nodded toward their tool of choice, an extendible pole with a small hooked blade on the end.

Adriene held the glorified scythe out to her while maintaining the outboard. Zoe angled the cutter toward the fraying strip of rope digging into the whale’s jaw. The safety blade slipped under the fishing gear. The boat slid closer, and Zoe reached for the whale with her free hand. His forty-foot frame listed to the side, revealing a grapefruit-sized brown eye, bulging with what she could only assume was panic, similar to her own. He had to know what was happening to him.

The moment her hand touched his black skin, a shockwave of fear rolled into her fingers and zinged to her muscles. She recognized his pain. It had been the same she’d felt from Lily. A desperate struggle for survival.

A barely audible crackle interrupted her moment of communion, almost like tuning in to a radio station just out of range. Or maybe the tail end of an echo, chasing the source of its birth, but unable to catch it.

Scattered fragments of noise pulled together, like metal shavings to a magnet. Whatever it was seemed to come from under the water. Musical notes? Zoe tilted her head and held her breath.

As each stray tone found its voice, it merged with others. More notes joined in, texturizing the building melody with a haunting, but beautiful, harmony.

But not just one song. Hundreds. Maybe thousands. All different dialects of the same language. They compounded, one building on the next, others jumping on, some at the back dropping off once they’d fulfilled their duty.

Amplitude rose as the bizarre sound wave headed straight for the Zodiac. The song hit a crescendo, and a word—or perhaps more accurately, the spirit of a word—barreled out of the humpback thrashing beside her, louder than a megaphone: Help!

Zoe winced and covered her ears. She must be dreaming. The whale crashed his flukes hard onto the surface. A sudden displacement of water nearly tipped the boat over.

Except it wasn’t his ‘voice.’

Lily was in Australian waters. There was no way Zoe would be able to hear her thousands of miles away. Sound carried under water, yes, but not this far.

Her breath caught, and her goose-bumped skin broke into a cold sweat.

Had the cry somehow been passed on from Lily in Hervey Bay via thousands of other whales like a relay race of voices? A tag team message from Australia to Massachusetts?

No. The impending panic attack must have scrambled her brain. Whales didn’t talk. They sang with chirps and groans and upsweeping drags. Not words.

Consciousness wavered. She begged it to hold on long enough for her to disentangle the whale. Her mouth went dry. Oh, no …

A wall of ocean crashed behind them. Tunnel vision. The boat tipped forward. She turned in slow motion to Adriene’s anxious face—brown eyes wide, mouth forming an O, fingers spread and reaching for her. Adriene grabbed one of the boat’s handholds.

Terror sizzled a path from Zoe’s heart to her appendages and froze her in time and space.

“I’m coming,” she whispered. Reality flickered and faded into nondescript shades of black and white.

She had finally followed in her father’s footsteps and jumped off the deep end. Literally.

For a split second that lasted a lifetime, Zoe flew. She inhaled what would probably be her last breath.

A figure appeared above her, on a cliff that didn’t exist, in the middle of the sea. A woman. Red hair. Glowing eyes.

And the ocean welcomed Zoe with open arms.